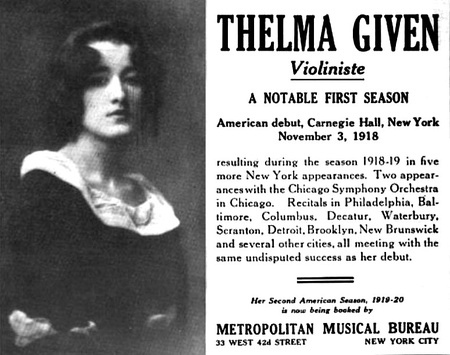 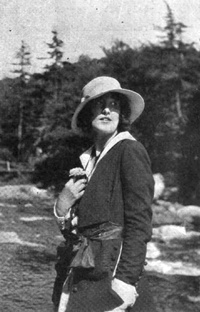 Thelma Mary Given was a child musical prodigy and violinist.  She spent the summer of 1919 at Spion Kop with her mother and brother, painter Eben Given.

She was born in Columbus, Ohio, and raised in Decatur, Illinois.  Her musical abilities were recognized by age 5,and she studied with Leopold Auer in Russia.  She toured Europe with Auer as a teenager, and was caught in the tumult of war and the Russian Revolution for almost a year before she and her mother were able to return to the United States.  She made her debut at Carnegie Hall in 1918and returned to the Carnegie Hall stage several times. She toured in the United States and Europe in the 1920s and 1930s, giving recitals and as guest soloist with orchestras. She played a Guarneri violin made in 1738.

Given lived much of her adult life with her mother and brother Eben Given (a painter), at Saranac Lake, and in the arts colony at Provincetown, Massachusetts in social circles that included playwright Eugene O'Neill. In 1943 she married Minturn de Suzzara Verdi, a New York lawyer.

We have been very busy getting settled up here. We have taken a charming house with about forty acres of the most beautiful ground one can imagine, up here in the Adirondacks, between Lake Placid and Saranac Lake, and expect to be here until September. You can 't imagine what wonderful air there is up here, and already I am so tanned I look exactly like an Indian.

About my "Playtime" this summer, I really don't expect to have much of one, as I am going to be very busy working up new programs for next season. Of course I can't work all the time and my free hours will be spent driving all over the country in our car, bathing at Lake Placid and doing all the usual things people do in summer. Last, but not least important—killing mosquitoes.

I confess, we have almost no desire to go out of our own grounds, they are really fascinating, quite like an enchanted little realm of our own, where we spend hours under the trees reading and so on. We have a grove of white birch trees, which, at night when the moon shines on them, looks like an illustration from a fairy tale.

At first I was disappointed not to go west this summer, but I am sure I will be able to work much better here. And then, too, my accompanist will not have so far to go.

Wishing you a lovely summer.

Thelma Given at Spion-Kop
Thelma Given, with her mother and brother, are spending the summer at Spion-Kop, near Saranac Lake, in the Adirondacks, New York, The house itself is delightful and stands in the midst of forty acres of very beautiful ground, covered with flowers. “It is certainly an ideal place to work,” writes Miss Given, “as there is nothing else to do except race over the mountain roads in our car or go to the movies in Saranac or Placid, as we are between the two villages, marooned on the top of a high hill with white forts and black cannons—wooden ones—on every knoll. The man who built the place is quite mad about anything connected with war, and the result is that it looks like a large military school without the school part. The air is wonderful. None of us ever felt better in our lives. I am as brown as an Indian and have gained quite a lot of weight. I am doing a great deal of work in preparation for next season. I hope to give two or three recitals in New York next winter and feel sure that I am going to play better than last year, when I was so nervous over my first season in America." Miss Given is modest—the rest of the world, listening to her splendid playing, certainly was not conscious of any nervousness.