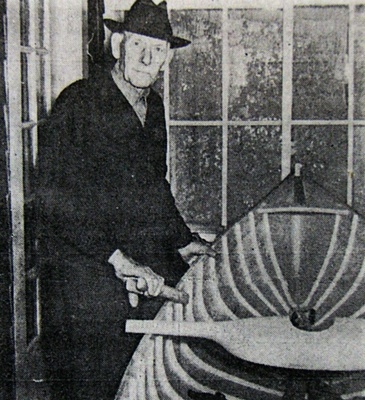 Theodore J. Hanmer was a guide boat builder, and the father of Willard Hanmer. In 1915, he was located at 77 Lake Street. He lived his last years at 123 Lake Street.

Theodore Hammer, one of this area's eldest citizens and one of the foremost boat-builders in the last 100 years of Adirondack history, died at his home, 123 Lake Street, Saranac Lake, at 5 p.m. yesterday. He was 97 years old.

His body will repose at his home until time of services which are tentatively set for Monday morning at 11 o'clock at the Presbyterian Church.

Mr. Hanmer was born at Black Brook on Feb. 26, 1860, a son of Truman and Sylvia Barnard Hanmer. He attended schools in that village and for several years was a stage coach driver in the AuSable Forks area,

He first became interested in boat building while a young man and learned the art of boat making from the veteran woodsmen and boatmen in the then-thriving Black Brook village. Mr. Hanmer came to Saranac Lake in the 1880's and accepted a position with Herbert Salisbury who operated a boat shop in the village. After several years with his employer, Hanmer decided to open his own boat construction firm and to center his efforts on the building of Adirondack guide boats.

This craft, known in its hey-day as the "light truck of the waterways", is reported to have first evolved at Long Lake under the guidance of the famed Mitchell Sabattis more than 100 yeans ago.

Mr. Hanmer was among the early pioneers in its development and included among his contemporaries, Willie Martin, who built what the oldtimers called "eggshells" for use at the Martin House; also George Smith, of Long Lake, Frank Blanchard, Raquette Lake, William McCafferey, of Bloomingdale, and Fred Rice, of Saranac Lake.

Mr. Hanmer's boats were in great demand. He refused, however, to sacrifice quality. He would not mass-produce his fine craft and to the building of his last boat about eight years ago, each boat carried the Hanmer mark of the expert, carefully built and entirely free from imperfections. His boats won many blue ribbons among the sports set of his time.

Until two years ago, Mr. Hammer had been in good health and had gone hunting at the age of 95. He had been in ill health for the last two years and had been seriously ill during the last winter.

His survivors include six daughters, Mrs. Clark Hayes, Mrs. John Buehler, Mrs. Carl Terry and Miss Bessie Hanmer, all of Saranac Lake, Mrs. Michael Frisco, of Syracuse, and Mrs. Charles Sayles, of Brooklyn. There are one granddaughter and eight great grandchildren. Mr. Hanmer's wife was the former Emma Abare of Black Brook, whom he married there on Feb. 23, 1889.

Theodore S. Hamner, [sic] at 74, Has Constructed More Than 200 of Famous Craft, Several for Persons in Foreign Countries

SARANAC LAKE. — For nearly three-quarters of a century, this section of the Adirondacks has been known thruout the entire country as the home of the Adirondack guide boat builders. But today the only remaining craftsman in this village is Theodore S. Hamner, who, despite his 74 years, is still active at his work and may be found each day in the boat shop.

Coming to Saranac Lake in the spring of 1890, two years after the incorporation, he has since been engaged solely in the construction of these boats. He has built more than 200 of the famous boats in the 45 years that he has resided here.

The style of the boats is patterned closely after the canoes used by the Indians. What is thought to be the first guide boat constructed in this section was built in Lake Placid, but the initial crafts were much heavier than the present model, for the original crafts were not made to be carried, which is one of the outstanding features of today's boats.

A 16-foot boat, which will safely carry a load of a half-ton, including three persons, weighs only 80 pounds. Despite the lightness, the boats are surprisingly durable, according to the veteran builder.

One of the questions, naturally arising in a person's mind does, of course, concern, the durability of the boat. Mr. Hamner recently had in his shop a boat which was built by Fred Rice some 50 years ago, yet It was as sturdy and sound as the day It came out of Rice's shop. Mr. Rice, who has since died, is said to have been one of the best builders in this particular industry.

The boats are made mostly by hand, altho machinery has taken over some of the jobs. Mr. Hamner estimated that it would require about three weeks for one person to build a guideboat. Back In the early 1900's, the boats sold for about $65, about five years ago it had risen to $200, but now they may be obtained for $140.

He has built boats for many famous people and guides. About six years ago he built two guide boats for John Raskob, former chairman of the Democratic national committee which were sent to his estate in Maryland. Some nine years ago he sent four of his craft to a man in Norway, while others have gone to Germany, Australia. Mississippi, Illinois, Maine and thruout the Adirondacks.

About 15 years ago he built a model, two feet long, which was sent to a person in England. It took him about two weeks to construct this model. Recently he offered to build a similar boat, to be about three feet in length, for the museum of natural history in New York city.

One of the primary parts of the boats is the foundation or ribs. These are made from the natural crook of hugh spruce roots and each rig is cut according to a special pattern. There are over 32 ribs in a 16 foot boat, yet they weigh only about three pounds. After the ribs have been fastened to the keel or bottom board, the bow and stern pieces put in place, the sides are put on. The builder puts first one board on one side; then goes to the other, so that the sides are being built equally. The gunwales, placed on top of each side, are made of black cherry, as are the back rest of the seats and the paddle. The bottom of the seats, of which there are three, are made of cane woven by hand.

To propel the boat a set or oars is used, which are made of maple. A peculiar feature of these oars is that they are placed in an Adirondack pattern oar lock, which allows the oar to work up and down, but prevents it from tipping as in ordinary boats. These boats are the only type using such an oar lock. The oars are about seven feet in length.