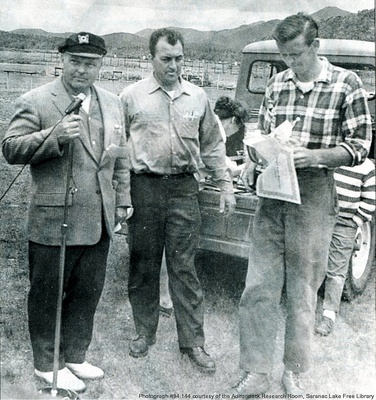 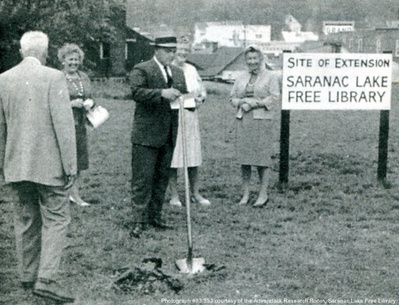 Thomas B. Cantwell, at the site of the 1967 expansion of the Saranac Lake Free Library, where he turned the first shovel of earth. The woman at the left in the photo is Esther Mirick. Adirondack Daily Enterprise, September 28, 2002 Born: 1916

Thomas B. Cantwell was a local attorney and civic leader; he was the son of Francis B. Cantwell. The Community Room of the Saranac Lake Free Library, of which he was president, was named in his honor. His home on Moody Pond at 120 Forest Hill Avenue still bears his name.

He attended the Baldwin School.  He was a World War II veteran.

Mr. Cantwell was born in Saranac Lake, the son of Francis B. and Genevieve Godfrey.

Mr. Cantwell had been appearing in the village office as an attorney for a client on grievance day when he suffered his heart attack. He was taken by rescue squad to Saranac Lake General Hospital where he was pronounced dead shortly after 3 p.m.

Tom Cantwell was famous for his oratory, his birthday poems at Rotary, his devotion to his family and to a healthy life. His involvement in the community attests to the strength of his interests.

He was presently a member of and had been president of the Rotary Club; he was currently serving as president of the Saranac Lake Free Library, he was a member of Masonic Lodge 789, a member of the building committee of the Pee Wee Hockey Association, captain of the Minutemen of the League for Adirondack Citizen's flights, one of the founders of the Hanmer Memorial Guide Boat Races, and the builder of the first ski tow on Mt. Pisgah.

He was an active supporter of the Boy Scouts. An Eagle Scout, he also was awarded the Silver Beaver and was a member of the 'committee for Troop 1.

He had been a commissioner of the Bedford District of the Adirondack Boy Scouts Council.

Following World War II, in which he achieved the rank of major, he returned to Saranac Lake and worked with the late Joseph Munn to rejuvenate the Winter Carnival.

In addition he was a member of the founding board of directors of Camelot, a St. Francis School for Boys.

He served at one time as village attorney. He had been president of the Essex County and Franklin County Bar Association; for six years he was state tax attorney; and he was counsel for Trudeau Institute. He was also treasurer of North Country Community College Board of Trustees until 1975.

He attended local schools and graduated from Williams College, where he was on the ski team, in 1937, Albany Law School in 1940 after which he enlisted in the Army.

He is survived by his wife the former Ann Winslow whom he married on Mar. 14, 1948; four sons, T. Barry, Robert A., and Edmond A. of Saranac Lake, and William W., at St. Lawrence University; three daughters: Sue Cantwell of Rutland, Vt., Mrs. James (Gale) Plunket of Cortland, and Frances of Rochester; a brother, William, of Denver; and an aunt, Claribel Cantwell, of Malone.

There will be calling hours at the Fortune Funeral Home on Thursday from 2-4 and from 7-9 p.m. The funeral service will be held on Friday at 11 a.m. at St. Luke's Church where he had been senior warden, with Father Philip Snyder, pastor, officiating.

The family requests that friends wishing to remember him make donations to the Saranac Lake Free Library which will be closed Friday till 1 p.m. for the funeral, to St. Luke's Church or to the Arena Building Fund.