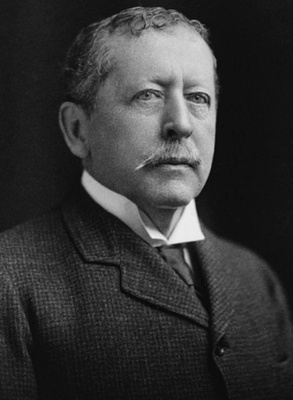 Thomas Bailey Aldrich was a poet, novelist, traveler and editor of the Atlantic Monthly.

Born in Portsmouth, New Hampshire, his family moved to New Orleans when he was a child. As a youth, he returned to Portsmouth to prepare for college, but his father's death in 1849 altered his plans, and at age 16 he entered his uncle's business office in New York in 1852 as a merchant's clerk.

He soon became a regular contributor to the city's newspapers and magazines, writing his first book of verses, The Bells, A Collection of Chimes, when he was 19, on the backs of bills of lading. His next effort, The Ballad of Babie Bell was a commercial success, and led to his appointment as a literary critic at The Evening Mirror. During this period, Aldrich became a friend other young bohemian poets, artists and wits of the of the early 1860s, including Edmund Clarence Stedman, Richard Henry Stoddard, Fitz Hugh Ludlow, Bayard Taylor and Walt Whitman. From 1856 to 1859, Aldrich was on the staff of the Home Journal, then edited by Nathaniel Parker Willis. During the Civil War, he worked at the New York Illustrated News, initially as a war correspondent, and later as editor.

In 1865 Aldrich was appointed editor in Boston of the eclectic weekly Every Saturday, which reprinted contemporary English and French literature; it was discontinued in 1875. In 1870, he published the semi-autobiographical novel The Story of a Bad Boy, in which "Tom Bailey" is the juvenile hero; critics have said that it contains the first realistic depiction of childhood in American fiction and prepared the ground for Adventures of Huckleberry Finn. From 1881 to 1890, Aldrich was editor of the important Atlantic Monthly.

In 1901, Aldrich's son, Charles, married the year before, was diagnosed with tuberculosis. Aldrich built two houses in Saranac Lake, one for his son and one for him and his family at 147 Park Avenue". On March 6, 1904, Charles Aldrich died of tuberculosis, age thirty-four. The family left Saranac Lake and never returned.