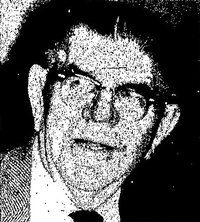 Thomas C. Norman, Sr. operated B.F. Norman & Son Farm, later known as Norman Farms.  He was supervisor of the Town of St. Armand for 19 years, and a director of the Saranac Lake Federal Savings and Loan for 43 years.

He was a son of B. Frank and Mary (Arnold) Norman.

SARANAC LAKE - Thomas C. Norman Sr., an area potato farmer best known for his 40 years in Town of St. Armand government, died yesterday evening at the General Hospital of Saranac Lake. He was 83.

Just two years ago this month, Norman told his constituents he would not be running for re-election to the supervisor's post in St. Armand, a job he had held for 19 years. He told town board members, "I'm no kid . . . It's time I step down."

"There's a lot of red tape and it's getting to be a headache," he said.

Norman first sat on the board as a councilman in 1944. His greatest achievement as supervisor, he always said, was conservative fiscal policies which kept the town debt free for many years.

Norman was born April 22, 1900, in Bloomingdale, the son of B. Frank and Mary (Arnold) Norman. The Norman family began farming in the Bloomingdale area in the early 1900s. Mr. Norman's grandfather cleared and farmed Norman Ridge in Vermontville. The area was later sold, but Thomas Norman Sr., bought it back in 1939.

He managed the farm for many years, and gradually transferred the day-to-day operations to his son, Thomas Norman Jr. He remained vice president of Norman Farms, Inc.

He was a director of the Saranac Lake Federal Savings and Loan for 43 years, chairman for the past four. He retired from the chairman's post last month.

He was also a member of Whiteface Mountain Lodge. 789, Free and Accepted Masons, a member of the Oriental Temple of the Shrine for 60 years and life member of the Saranac Lake Elks Lodge 1508.

Norman was also president of the General Hospital of Saranac Lake Hospital Board.

He was married Nov, 26, 1921, in Bath to Olive Brundage, who survives. They had a son, Thomas C. Norman Jr., and a daughter, Mrs. Phyllis Knobel, both living in Saranac Lake.

Calling hours will be held tomorrow from 2 to 5 p.m., at the Fortune Funeral Home. The funeral service will be at 3 p.m., Saturday at the funeral home, with the Rev. Forrest Clark, pastor of the Bloomingdale Methodist Church, and the Rev. J. Bernard Fell of Vermont officiating.

Memorial donations may be made to the Shriners Crippled Children's Hospital and Burn Centers or the donor's favorite charity, in care of the funeral home.