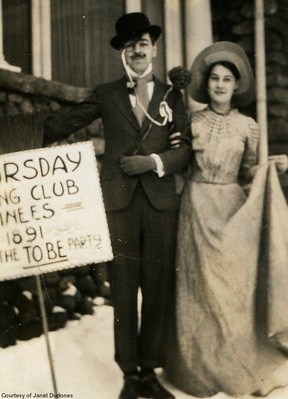 "Every new patient at Trudeau was enrolled as a member of the Thursday Evening Club, which sponsored the hospital social activities, holiday parties, and special events, like the celebrations staged for discharged patients, called 'Graduation Exercises.'"  From The Last Crusade: The War on Consumption 1862-1954, by Mark Caldwell, page 120.

From Portrait of Healing, by Victoria Rinehart, pages 89-90.

"All patients at Trudeau Sanatorium were members of the Thursday Evening Club, which sponsored social activities, holiday parties, and other special events at the hospital.

"Medical staff, nursing staff, local talent from surrounding areas, and sanatorium patients all contributed their talents to various social events. A 1925 program included a mouth organ recital; a medley of Scotch airs; a presentation of x-ray plates; a recitation contest, including Symptoms and My Fibrosis; a violin concert; and a hypnotism demonstration. A local high school drama director offered a humorous drama presentation, and two nurses entertained by playing the piano and singing."

From a column in the Chateaugay Record, Friday, August 12, 1921, via Northern New York Historical Newspapers

"Life at the sanatorium is far from being dull as all sorts of entertaining are given to pass the long hours. Musicals are frequently given, and the Boston Symphony ensemble, which is at Lake Placid, recently played for the patients. Motion Pictures are another source of amusement, while the Thursday Evening Club sees to it that there are few dull moments."

From the Ed Worthington scrapbooks, with a cover page designating the publication as The Weasel:

Congratulations, Dick Walters, at last you've found a cousin. We like Dorothy Murray too.

Say boys, have you ever been up in Minnie's room? It was quite popular the nite of the Scavenger Hunt. That Fisher gal sure did fix Charlie Iliff up.

Nan Lindberg has the rep of being the quietest girl in Blumenthal. HAHA! BUT birds of a feather cousin together. Abe Mushlin, you know, is from Hall, the Psychopathic Ward.

Ann Breen is crazy about ball games, but when seen one Sunday at the ball game seated in a light blue roadster, she seemed more interested in her escort.

Kerbs 2 is a Rest Cottage, Saul Grossman. Are you sure you are resting all the time you are there?

Wouldn't the boys get a treat if they could see Peggy Deane's snappy polished toe nails lit. How about showing them, some time Peggy?

It isn't a rainbow that Sam Friedman, has around his shoulder, but a woman around his neck, and she isn't a lightweight either!

Helen Croke sure goes in for big men and titles. Don't you know—Dr. Leech", and then there is Dr. Bill Frank!

Dr. Paul Culbreath, why don't you give the girls a break? They'd like to hear sweet nothings whispered in that Southern drawl of yours.

Bidabar Bradley is sort of alone these days. The "Big Moment" Tom Lee is sojourning in New York.

For a bed patient, John Grady is making quite a bit of progress with a certain nurse.

What! Grace Sherwood, no ground cousin???!! Surely you don't spend all your time in Ludington?

Derry Stiber seems to enjoy reading the newspaper with one of Trudeau's dashing heroes. Is it possible that you are trying to establish a cousinship? You know, Derry, he lives in Montreal — not in New York. 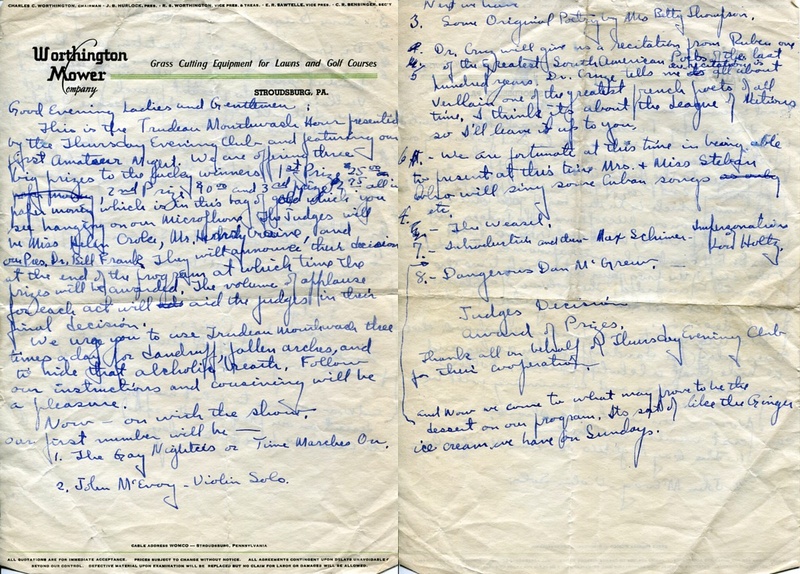 Notes for the Master of Ceremonies

Ina Anderson sort of goes in for redheads.

Is the picture of that beautiful girl on your dresser the reason you ere not giving the Trudeau girls a break, Eddie Slevin?

Elsie DeWitz is going angling. How about going hunting, Elsie—for a duck?!

Walter Mack has been going on some special expeditions lately. They must have been pretty interesting when he forgot to wear his rubbers home.

Herman Platz has always been very popular with the ladies, and now with his snappy roadster!! Ugh! Ugh! Looks as though the lady doctor heads the list.

It has been learned that Tom Turnoy won't be back. So it's O.K., fellas, Mary Morris is now open for any and all offers of cousining.

Gladys Baker is a perfect illustration of one kind of Trudeau spread, and it doesn't require an X-ray to show it.

When are you going to give the girls on the grounds a break, Bud Wright? Don' t you think you have concentrated on the nurses long enough? Or are you waiting for Elsie Brem to come to the grounds?!

Caroline Leonardo and Weski are talking of taking that excursion to New York. Caroline was heard to remark that she couldn't climb into the upper berth. Guess you will have to take the upper, Weski.

We didn't think anything could throw our Treasurer, Abe Mushlin, but we were wrong. It was either a little bug or a little girl.

Nita Hayman will probably profit by Eddie Worthington's new position as librarian. What he doesn't already know, he can find out from his books, but it won't be much. 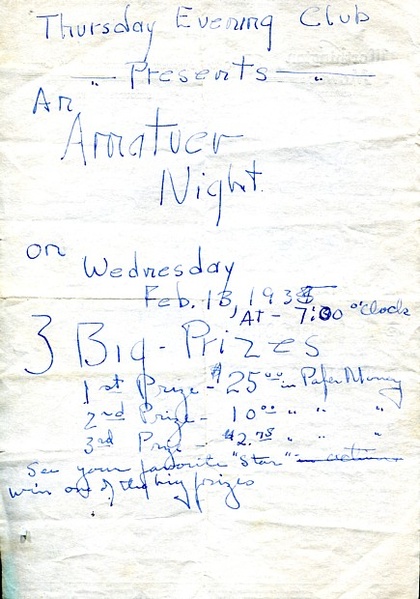 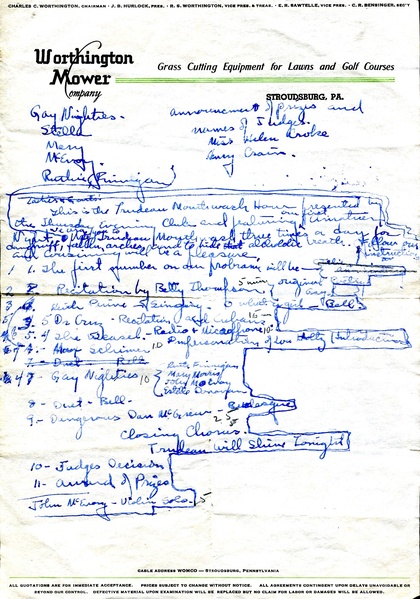 Hands off Frank Hoye, girls!!! Or Mrs. Frank might pass you the black bottle some time when you are on trays.

Boys, did you know that there is a Southern belle in our midst? Her name? Why, of course, it's Margaret Kneisley of Blumenthall.

Hurry up down to the grounds, John Fox, All the girls are lined up waiting for you.

Nellie Shanley hasn't collected the five hundred dollars yet, but it's due to arrive any day. Wonder who the lucky cousin will be? This young follow, Deckert, up in Kerbs seems to have first call now.

Frances Barnett sort of called halt to her cousining since her handsome husband, Jugsie, paid a visit.

Dave Kohen seems sort of "lost in a fog" since his return from his vacation and finding Bee Beiring among the missing.

This certain young doctor is quite busy these days, Rite Morrissey, but cheer up! Trudeau School doesn't last all summer.

Betty Thompson is full of pep these days. It's not only her discharge; there's that June graduation — hubby's you know!

It was a remarkable coincidence that the same night that Mel Barnes cracked his head in the bathroom, he also lost his hat.

Say, Mary White, are you making out as well with Charlie Iliff at the table as you did with James Howard McDermott?

Tell us, Joe Miskela, are all the girls falling for your Rudy Vallee smile — even the blonde in the kitchen?

Sung to the tune of "The Man on the Flying Trapeze" 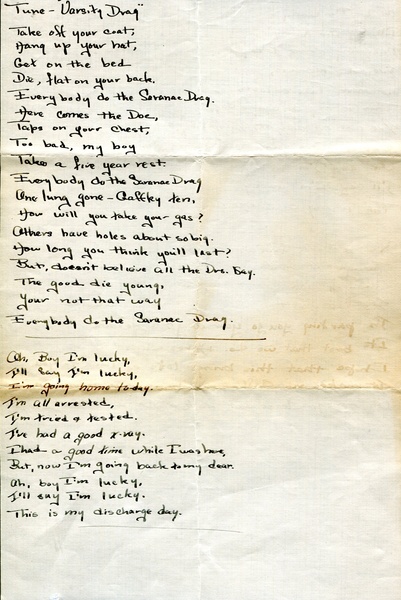 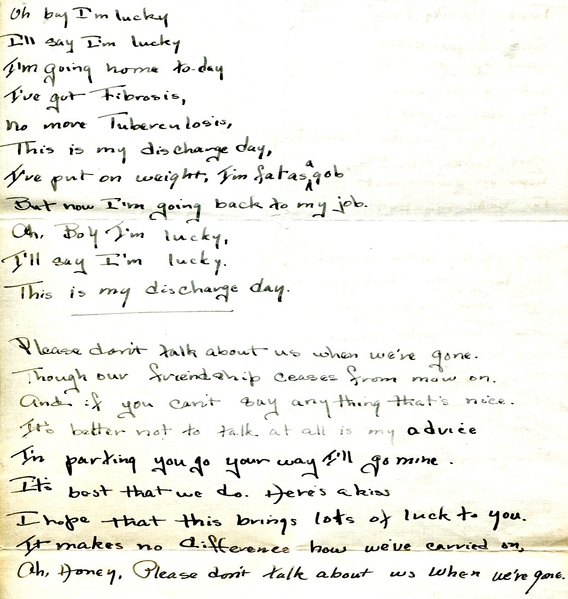 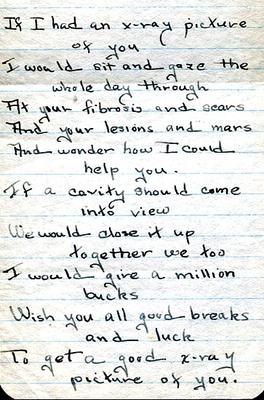