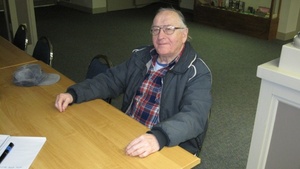 His father, Pearly Jacobs, was in charge of maintenance at Stony Wold Sanatorium, and his mother taught eight grades in the one-room school nearby.

Founded in 1901 by Elizabeth Newcomb, Stony Wold accepted only women and children TB patients until 1937, when men were admitted as well.

Tom and his older brother Carl spent many hours working for their dad and at a variety of other jobs, including work in the laundry sanitizing sheets for 18 cents hour.

Drafted into the Army in 1953, Tom served three years in Germany in Morse Code Intercept before returning in 1960, when the family moved to Bloomingdale.

Among Tom's more interesting work was a stint at Buster Crabbe's camp as life guard after high school and a variety of jobs with DEC's campground program, ORDA, and North Elba prior to retirement.

Published as a "Living History" article, Adirondack Daily Enterprise, 12/2013. Tom was interviewed by Kirk Peterson in 2013.