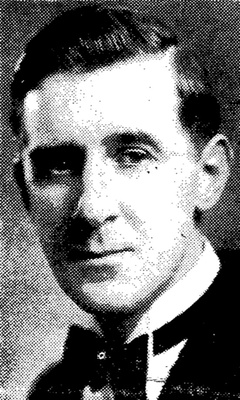 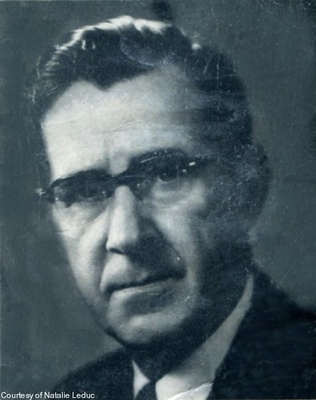 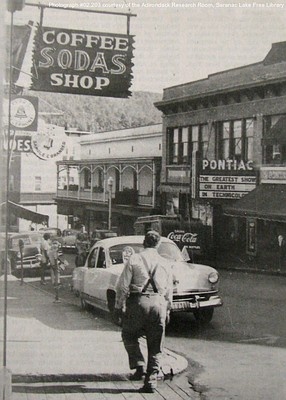 Alton B. "Tony" Anderson came to Saranac Lake at age 20 ill with tuberculosis, and stayed on to manage the Pontiac Theatre for fifty years, and served as mayor for sixteen years, and village trustee for another four years. The bandshell in Riverside Park was named in his honor. He is buried in Pine Ridge Cemetery.

From the Adirondack Daily Enterprise, August 20, 1981

SARANAC LAKE — Beloved in his community and a warm friend to all he met, Alton B. "Tony" Anderson, died on the porch of home this morning.

Tony died shortly before 8:39 a.m. today when the call was made to the Saranac Lake Rescue Squad. It was his habit to breakfast each morning on the porch at 8 South Hope Street.

His death leaves a gaping hole in the life of this village because his life left a legacy of kindness and selfless service.

Tony had been ill for many months but continued to be seen daily right to the end in downtown haunts musing with old friends about the village to which (as he said) "I came to die."

Instead of dying of serious tuberculosis at the age of 20, Tony thrived here after his mountain cure and led the community for 60 years. He died at 82.

As a sign of their love for the man who loved them so, Saranac Lakers nine times elected Tony Anderson mayor, and four times elected him to the Village Board.

The list of his clubs, civic achievements and awards runs to pages. The story of his life here is, in large measure, the history of Saranac Lake in the last half century.

On the occasion of an award night for Tony Anderson in 1975 the Adirondack Daily Enterprise wrote the following appreciation:

Will Rogers said, 'I never met. a man I couldn't like.' With apologies for the paraphrasing, we say, 'We never met anyone who didn' t like Tony Anderson.'

Over the years, since his arrival here to "cure" he has become as much a part of Saranac Lake as the river. Although not a born native, his perennial cheerfulness, friendliness, willingness, his concern for others exemplify the best of Adirondack tradition and make him a native in spirit.

The Pontiac Theater, under his direction for 50 years, has also become a part of Saranac Lake. Every purchaser of a ticket gets a personal greeting and the V.I.P. treatment from Tony.

Everyone has a store of memories about the Pontiac which certainly include Winter Carnival shows and the period when Catholic services were held there while the new church was being built. During that time, it can be "recalled, the manager gravely accepted the title, 'Father Anderson.' "

Broken in health Tony was brought to Saranac Lake by friendly Masons, who financed his trip, when Tony was just 20 years old.

By his own testimony doctors in the city had "given up hope for me."

Nearly destitute, Tony fought TB for four years in Saranac Lake and the gift of life, so nearly taken from him prematurely, is said by many to be one reason he repaid mankind with the gift of his warmth in our cold environment for the next 60 years.

He once told a newcomer in 1970, "the people in this town gave me my life. I can't ever leave. I have a life sentence."

He came here from Southington, Conn., where he trained as a toolmaker.

After recovering his health here, there was no toolmaking job available so Tony went to work as an usher and jack-of-all trades at the then-thriving Pontiac Theater, where he spent the remainder of his working life.

In 1929 he was named assistant manager of the theater and a year later he became manager.

He never missed a day because of sickness.

In the late 30s he was elected president of the Boat & Waterway Club and during the war years he was a spotter for Civil Defense-He entered politics in 1944, running for and winning a post as Village Trustee. In 1947 he was elected Mayor. In total, he spent some 25 years. 1944-1969. either as trustee or mayor, a record that stands unmatched in the North Country.

"Tony" believed in long engagements. He was a member of the B.P.O. Elks for 42 years and secretary of the Saranac Lake Rotary Club for the past 30 years. He was honored when Rotary named him a Paul Harris Fellow, the highest honor Rotarians can bestow on a fellow member.

His last 50 years were studded with awards. He was the recipient of an award from St. Bernard's parish for the use of the theater following the fire at the church. He also received the "Good Neighbor" award by the citizens of Saranac Lake as well as being cited by the Boat & Waterway Club, the Saranac Lake Hospital Board of Directors, the Blood Bank and others for excellence in community projects.

This year he was given the Distinguished Service Award by the Whiteface Mountain No. 789, The Grand Lodge of the Masonic Order.

His incredible political career was as follows:

Elected village trustee in 1944 and 1946. Later that year he was appointed mayor to fill out the term of Mayor Carson, who resigned.

The village called on him again in 1968 to serve out the term of Howard Riley, who had resigned. Then Tony was elected mayor again in 1969.

A profile of Tony in the Daily Enterprise written by Charles Decker in 1977 describes Tony's travails leading to his coming here:

Tony was working as a tool-maker in Southington. Conn., when he contracted the dreaded tuberculosis. At the time, ten of his workmates also became afflicted, a result of having worked side by side with a consumptive in a small, unsanitary room. Of the ten stricken, just two lived.

Tony immediately committed himself to the Wallingford State Sanitarium, but after a brief stay he was moved on to the san in Hartford, little more than a death-house in which patients with advanced TB waited out their final days.

Hartford had the advantage of being the most inexpensive san in the state, however, it offered little relief to an almost destitute 20-year-old.

'I was 20-years old. had no money… and really, had no alternative but to be there,' Tony remembered.

He also recalled that one occupation of the patients at Harford was waiting up each morning and seeing who had died during the night.

For a young man with a comedian's spirit, the situation at Hartford was too much. In spite of his deteriorating state, he readily agreed when some friends suggested that he get a change of scenery.

His friends from the Masons told Tony of Saranac Lake which was then emerging as a popular cure center for TB patients. They told him they would sneak him out of Hartford, take him to Saranac Lake, and finance his stay in the North Country.

Just one month after he arrived there, Tony left the Hartford State Sanitarium. His friends met him late one night at the gate and sprung him. They immediately headed down the road for Saranac Lake.

Tony never dreamed he was on the road to recovery.

His existence in Saranac Lake for the first few years would have to be described as threadbare. 'I was living in the poorest houses in town... and in the poorest rooms in those houses,' Tony recalls.

'And I was loaded with TB' he continued. 'As a matter of fact, for three of my four years of curing, I had what was known as the 'TB throat,' which meant I could only talk very softly, in a hoarse whisper' ".

In 1975 the community honored Toby with a "Tony Anderson Night" which filled St. Bernard's Church with admirers who also saw a special presentation of the play "Goodspell."

During the precarious war years of the early 1940s he could be found in his cubicle on top of the Hotel Saranac where he served two years as an airplane spotter; The lookout was perched on the Academy Street side at the northeast corner and an exterior ladder stairway led to those wind swept ramparts well above the roof level.

When the blood bank program first became a vital life saving factor throughout the country, Tony was one of the initial donors and his contribution was totalled in gallons, not pints. He cherishes a special pin reserved for those who gave far above the accepted level.

In the front lobby of the theater, a bronze plate is displayed thanking Tony and the theater chain for allowing the Catholic church to use the premises to hold Sunday masses for two years following a disastrous fire at St. Bernard's Church in 1967.

He is survived by his wife, Helen, and "two children, Charlene and Bailey: Further survivors and funeral details were unavailable at press-time.