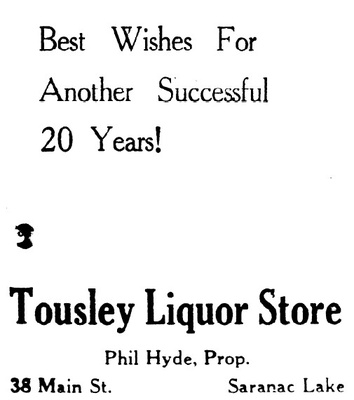 Tousley Liquor Store ad on the occassion of the 20th anniversary of Paul Smith's College's openning. Adirondack Daily Enterprise, September 19, 1966 The F. K. Tousley Liquor Store at 38 Main Street was owned and operated by Henry Tousley's son, Frederick Tousley from right after prohibition until his death in 1954. Francis Thomas Gardiner managed it for many years starting in the 1930s. Phil Hyde was the proprietor in 1966.