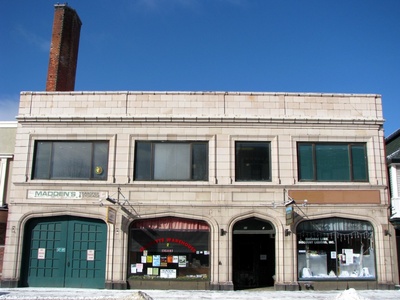 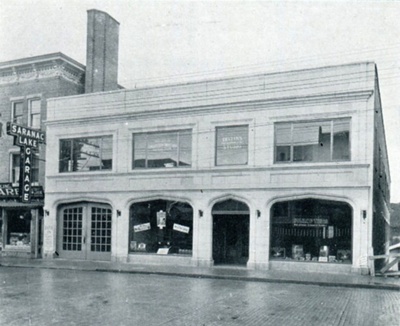 Saranac Lake Garage in the 1926 Canaras. Note the brick paving on Main Street and the pre-fire Walton and Tousley Hardware 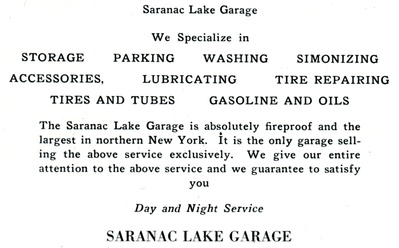 Other information: In 1924, the Milo Miller Estates built the fortress of a building at 38-40 Main Street. Though formidable on the outside, it is on the inside that the Tousley Building shows its strength. It had originally been conceived to rise six stories above the sidewalk; and there is more than enough steel to bear that weight. The first use of the bulk of the building was as Vern Carr's parking garage and Dodge sales agency. There is a freight elevator in the building that has a capacity of 7425 pounds. Made by the Warsaw Elevator Co. of Warsaw, N.Y., it is large enough to carry two automobiles side by side.

The old State Conservation Department's District offices occupied the second floor office space until the early 1950s. Of the two storefronts, the southern one has held a liquor store since right after prohibition. This was owned and operated by Henry Tousley's son, Frederick, until his death c. 1954, and continued under the name "Tousley Liquors" until recently.

Approximately 1940, the Miller Estate opened the Adirondack Storage Vaults in the vast second floor space behind the offices. This was a refrigerated cold-storage vault for furs and "no expense was spared to make it the finest cold storage facility in northern New York", according to the manager of the Lincoln Warehouse vaults that once occupied most of the lower floors.

The Lincoln Warehouse Company operated storage vaults in a building at 10 Bloomingdale Avenue throughout World War II. Following the war, they leased the old Saranac Lake Garage space on the first and basement levels of the Tousley Building and converted it to storage vaults for documents — mostly microfilm.

These vaults are not small. They are a honeycomb of full-size rooms built of gypsum block. This material is lightweight, fireproof, and responds to humidity in a manner conducive to maintaining that condition at archival standards. The steel doors, some single and some double, 8x3 1/2 feet, are hung on four pin-type hinges, and close with three spring-loaded bolts.

Until around 1960, when Lincoln opened their Iron Iron Mountain facility south of Hudson, New York, the vaults of the Tousley Building held microfilmed copies of all the valuable records of most of the major oil companies in the United States, the New York Stock Exchange and many of the largest stock brokerage firms, as well as many of the nation's big banks and insurance companies, not to mention shipping companies, mining companies and numerous corporations holding large Pentagon contracts. There were many secret documents, and the facility was cleared for top-secret ones, though none were stored there. There were a number of items of value in the vaults besides documents, the most exotic of which was the Crown Jewels of Luxembourg.

There were reasons for all these things being in Saranac Lake besides the fact that the Tousley Building was well constructed. First, in case of nuclear attack, the village is in an area less likely than any other in the Northeast to be adversely affected by either blast or fallout; and the concept of "nuclear survivability" is one that was taken quite seriously by America’ s corporate giants.

Second, the natural average humidity of the region was considered most nearly ideal for the type of storage contemplated.

Third, while Saranac Lake had only a volunteer fire department, it had the highest rating that such a department could obtain.

Finally, according to a report by General Motors on the advisability of storing its documents at Lincoln's vaults, the Village of Saranac Lake at that time had a police force surpassed in effectiveness only by New York City and Buffalo. This was in large measure due to the skill and efficiency of then Police Chief Bill Wallace.

The Tousley Building, two stories in front and three at rear, is of steel-frame and brick construction. Four Tudor arches mark the ground floor of the facade. The first and third (left to right) are the entrance to the garage portion and the entrance to the storefront and office portion of the building. The second and fourth are display windows. All but the third are approximately 12 x 9 feet. The third is 6 x 9 feet. The treatment of the second story, with windows of the Chicago type, hints at commercial style. At either end of the facade and on the piers between the arches are wrought-iron lamps. Unfortunately, only one of these is intact. There is a brass standpipe just to the right of the third arch. The entire facade is clad with architectural faience that has been glazed ivory. The glaze has a satin surface that has crazed and taken on subtle variations in color over the years so that it seems almost to be alive. The detailing is balanced and achieved mainly with the use of different kinds of molding, all executed in faience.

A special detachment of state troopers has been assigned by Capt. George Paul Button, district superintendent at Albany, to protect the quarter of a million dollars' worth of jewelry, automobiles, accessories and merchandise to be displayed at the First Annual Saranac Lake Exposition, Auto and Trade Show, August 8, 9, 10, 11, at the Saranac Lake Garage. Capt. Hutton's troopers will cooperate with the local police force of Chief Frank Sheldon during the entire run of the American Legion project, patrolling the three floors of the newly constructed garage, and maintaining order among the thousands of visitors expected to throng to Saranac Lake during the latter half of next week.

Special arrangements have been made to extend a fitting welcome to Governor Alfred E. Smith's special representative, Supreme Court Justice Edward J. McGoldrick, who has been delegated by the Governor to open officially the Exposition, a previously made engagement of considerable importance rendering it impossible for Gov. Smith to attend in person. The Governor has expressed his intention, however, of coming to Saranac Lake the following week as a guest of the two American Legion Posts, sponsors of the enterprise.

Considerable interest is being manifested by the various charitable organizations of Saranac Lake in the disposition of the one-third of the proceeds destined for distribution among local charities and other deserving causes. The Exposition Committee has decided to allow the public to express its choice. A ballot, accompanying each admission ticket, will enable the entire community to name its favorite charity, and the Exposition Committee will be guided to a considerable extent by the voting in apportioning the thirty-three percent of the proceeds.

An elaborate program of music and other entertainment has been arranged for the four days of the Exposition. Several excellent orchestras from adjacent communities have been generously donated their services to the Legionnaires, and visitors are assured of several hours of dancing at each of the two daily performances to be held afternoon and evening next Wednesday, Thursday Friday and Saturday. Dave Bernie and his band, by courtesy of Paul Stevens; the Fawn Club Orchestra, by courtesy of J. B. Williams, the Beaux Arts Orchestra, by courtesy of Walter Rukeyser, manager of the Grand View Hotel; the Happy Dozen and other musical organizations of note. Chairman James R. Merreli has announced the following schedule of special events: August 8, Plattsburgh Day, Chairman F. G. Eastland; August 9, Lake Placid Day, Chairman Paul Stevens; August 10, Saranac Lake, Old Home and Children's Day, Chairman C. M. Palmer, and August 11, Malone Day, Chairman John Hinds.

Most of those merchants who, thru lack of exhibition facilities, were unable to obtain booths, have inserted advertisements in the attractive forty-page program now being printed. A compelling poster by John Held Jr., the eminent artist, has been printed in two colors and is being extensively distributed thru-out Northern New York. "Teaser cards" for display on automobiles will appear within a few days, together with various enterprising "ballyhoos" calculated to stimulate interest in the project.

G. A. Trahan, the well known decorator, has been selected to design and superintend the decorations, interior and exterior, of the Saranac Lake Garage, home of the Exposition. The outside of the edifice will be draped in bunting, American flags and American Legion emblems, while each of the three floors will have its own distinctive color scheme. A special attraction, Wistaria Grove, has been arranged for the basement, and will prove, it is predicted, one of the most artistic and attractive novelties ever shown in this vicinity.

So intense has been the enthusiasm in the Exposition that there is no doubt but what the project will be the first of a series of annual expositions to be run at the Saranac Lake Garage by the Jackson A. Matthews and Saranac Lake Posts of the American Legion. Performances will start at 2.30 and 6.30 P. M., and general admission will be twenty-five cents. A small charge will be made for dancing.