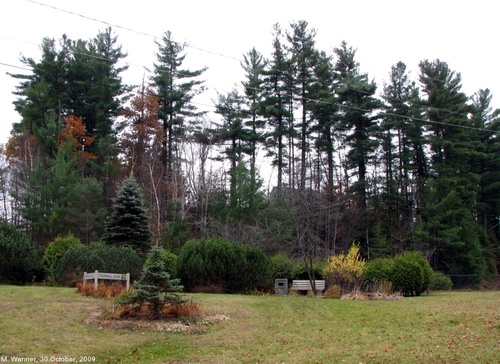 Triangle Park, maintained by the Village Improvement Society, lies between Dugway, Pine Street and the former route of Main Street, and bisected by the tracks of the Adirondack Division of the New York Central Railroad. It is the site of the first store in Saranac Lake, built in 1854. Baker's Hotel was across the street at present day 1332 Pine Street (8 Pine Street). It lies substantially in the right-of-way of the Adirondack Scenic Railroad, and was first developed as a park in the 1970s or 1980s by Carol Monroe, who lived at 8 Pine Street. The raised-bed herb gardens on the south side of the park, between the tracks and the Dugway, were established and cared for by Janet Decker, aided by Dr. Fritz Decker.