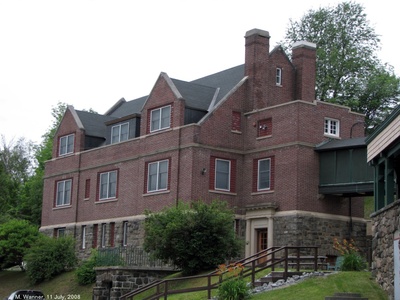 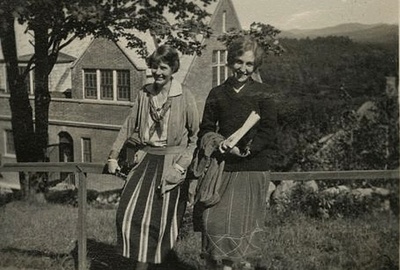 Description: The Trudeau Laboratory is a two-and-one-half-story building. The foundation and first story are constructed of square-cut ashlar in irregular courses. The upper portion of the building is constructed of red tapestry brick. The building is surmounted by a gabled roof that rises behind a brick parapet. Large pedimented dormers are flush with the facade. Limestone is used for the watertable, belt course and cornice. Windows are arranged in groups of three. Original sash were replaced after 1957 with smaller sash and wood shingle infill. Trudeau Laboratory is connected to the Medical and Reception Pavilion by a covered aerial walkway.

History: In 1922 McAlpin Cottage was demolished to make room for this 6,900 square foot fireproof laboratory, funded by $100,820.34 in contributions. Construction began that May, in a Flemish Revival design which resembles the Animal House, as well as additions to the Saranac Laboratory in the village. When complete, the building contained the medical library and the bacteriological, chemical and X-ray laboratories; the medical library and X-ray facilities were moved from the earlier Medical and Reception Pavilion next door. Strasimir A. Petroff, Ph.D., was the bacteriologist. 1 This laboratory, along with the Mayo Clinic, did the laboratory testing of the drugs that finally controlled tuberculosis. 2

It was reported then that kanamycin should prove potent against the hard core of TB patients who do not respond to other anti-TB drugs. The first nation-wide test of the drug will be carried on soon in Veterans Administration hospitals.

Dr. Steenken told The Enterprise that Trudeau Laboratory was the first laboratory in the country to receive kanamycin for experimental studies. His paper was naturally a highly technical one. However, one sentence seemed particularly significant: "Definite beneficial effect was noted in experimental tuberculosis in guinea pigs infected intracardially and treated with 30 to 40 mg/kg/day of kanamycin administered intramuscularly."

Although the new drug has interesting possibilities, it was noted at Philadelphia that it might have toxic, harmful effects on some patients.

"The drug came to us through Bristol Laboratories of Syracuse," Dr. Steenken said, "which had been given the rights to manufacture it in this country, and they requested us to prove or disprove its value in tuberculosis.

Dr. Steenken said that "There has never been an antibiotic used clinically in tuberculosis which the Trudeau Laboratory has not been one of the first called upon to prove or disprove its value for clinical trials in humans."

The Steenken paper at Philadelphia was well received. Dr. Walsh McDermott, editor of the American Review of Tuberculosis and Professor of Medicine at Cornell, observed that the Trudeau studies had been thorough and that practically all the answers to kanamycin were now available and whatever might be added in the future could only be of minor importance.

In the case of streptomycin it took several years of effort after its discovery before all the details of its action were worked out, Dr. Steenken said.

"There are several interesting things about kanamycin", he said. "It is an antibiotic similar to streptomycin and was isolated from the soil, whereas isoniazid, another anti-TB drug, is a synthetic chemical. Also, kanamycin is what we call a broad spectrum drug, that is, it is active against types of bacteria other than the tubercle bacillus.

"For instance", Dr. Steenken said, "it is very active against staphylococcus penicillin- resistant organisms, which are creating havoc in various hospitals throughout the country. Because of this broad spectrum, kanamycin is of greater value than isoniazid which active only against tuberculosis."

The new drug was first discovered last year by Hamao Umezawa of the National Institute of Microbe Biological Research in Tokyo. Researchers sifted through scores of soil samples from all over the world before uncovering the new drug. It comes from a mold found in soil.

Dr. Steenken said that at present the Trudeau Laboratory is working with another drug, thiocarbanidin (a synthetic chemical), which may possibly take the place of para-aminosalicyclic acid (PAS). PAS must be taken in very large amounts and sometimes causes intestinal disturbances. The hope is that thiocarbanidin can replace PAS since it is "about ten times as active as PAS on a weight to weight basis."