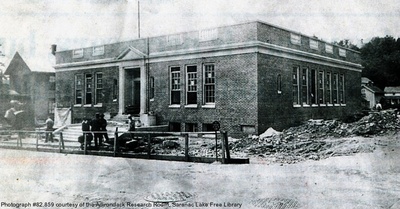 Broadway, 1930, looking south from the foot of Olive Street. The U.S. Post Office, is at right. The original broad steps have since been narrowed. Adirondack Daily Enterprise, June 23, 2007 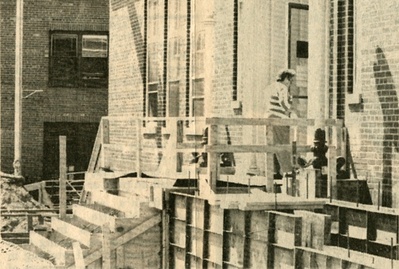 The Saranac Lake Post Office was fitted with new stairs along with a handicapped access ramp in 1979; ten years later, it had to be completely redone. Plattsburgh Press Republican, July 11, 1989

The 1906 Adirondack Directory lists one of J.A. Latour's liveries at this address. Then in 1917-18, the Palmer-Simpson Company built wooden sea-plane hulls here for use in World War I.

In 1924, the U.S. Postal Service constructed a new post office at 60-66 Broadway in Saranac Lake. Post Office construction was resuming slowly following World War I. The design of public buildings then was the responsibility of the Treasury Department, and the emphasis was on standard design and construction economy. This building replaced the previous Saranac Lake Post Office at 69 Main Street (old address).

In the late 20th century the Post Office conducted an historic survey of post offices that included post offices in this area. While the Lake Placid P.O. was listed as an historic building, Saranac Lake's was disqualified (according to the memory of one witness) based on the warm yellow color that the trim had been painted (it has since been repainted in white) and the intrusive handicapped-accessible ramp that had been constructed to the left of the front entrance. That ramp has since been replaced with a lower one to the right which takes advantage of the slope of the site.