Union Depot 1  was built  by the Delaware and Hudson Railroad, consolidating the operations of the Chateaugay Railroad from the east, and the New York Central Railroad from the west. It was built on the site of the old Chateaugay depot, which was moved across the tracks and attached to the old freight house as an office. The New York Central's former passenger depot on Broadway continued in service as their freight house.

Union Depot was the largest station on the line north of Utica, handling from 18 to 20 trains per day (half of which were returning from Lake Placid) during its busiest years, 1912 to 1940. The Railway Express Agency building east of the depot was built about 1924.

The last New York Central passenger train left Union Depot on April 24, 1965, and Union Depot was closed shortly thereafter. The station was restored in 1997-98 with federal funds in anticipation of renewed tourist rail service. The station is owned by New York State, which received it as part of the bankruptcy of the Penn-Central railroad. 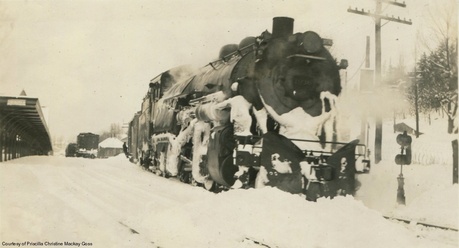 Beautiful golden memories (edited for railroad references only. The complete article is on the Bloomingdale Avenue page.)

Another historic hotel that claimed the bulk of transients traveling by New York Central and the Delaware and Hudson was the strategically located Grand Union Hotel at the corner of Depot Street and Bloomingdale Avenue. 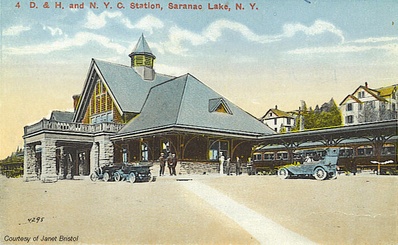 The section of town where the railroad station stands was bounded by noise and happy confusion with two lumbermills, J.A. Latour, the Railway Express, and the Day Nursery all vying for a share of attention.

A few livery stables were making a last ditch stand but Harley Davidson and Indian cycles were causing more runaway horses than the incoming locomotives at the Union Station.

At night if you felt brave you had races on top of the arcade roof (the long metal canopy that covered the passenger platform), a private cinder path 150 yards long and 15 feet wide. If the train happened to be moving along beside it, you could leap onto the sleeping cars and off to the roof again. A slip meant a lost leg or decapitation. Nobody thought much about that part.

The freight and baggage rooms were also an education with crated chickens, pickle barrels, and pathfinder bicycles all arriving on the same baggage cars. A runaway horse was also an exciting event in that section and happened once a week without fail.

In a letter dated Nov. 29, 1990, Dean Lobdell wrote: "Many is the morning I met the train to pick up the Syracuse Post Standard at 6 a.m. to deliver. Then there was the day a troop train picked up members of the 105th National Guard and off to WW2."

Union Depot, before 1920 (Library of Congress) 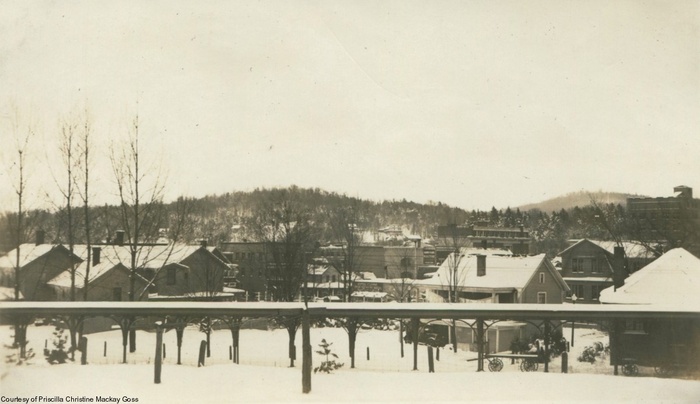 Union Depot canopy from Margaret Street, 1930s. At right is the Railway Express Agency building and 23 Depot Street; at far left is the back of the Ensine Miller's Sunnyside. 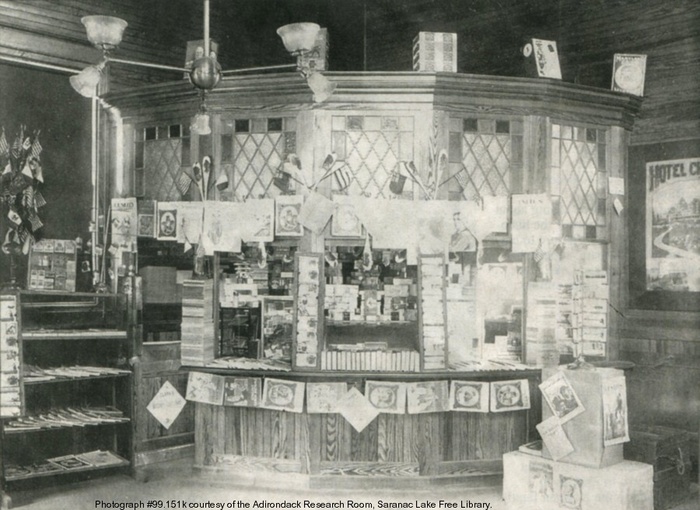 The newsstand at Union Depot. In later years, Harry Hoffer ran the stand, and continued until passenger service was discontinued in 1965. (Reprinted in the Adirondack Daily Enterprise, 4/28/2007)" 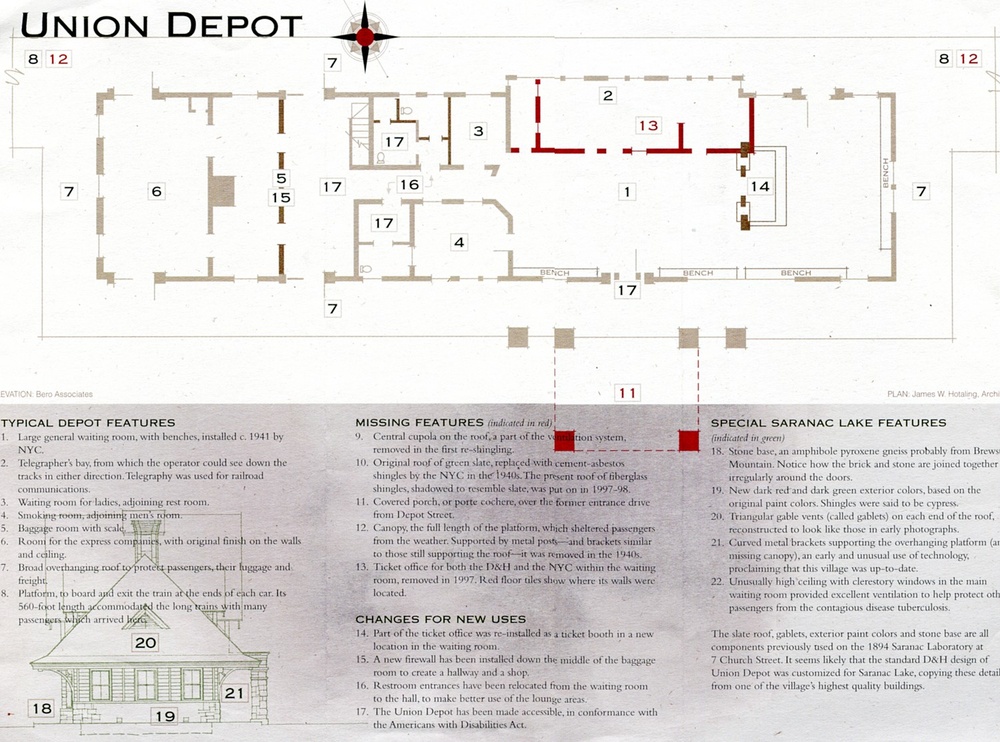 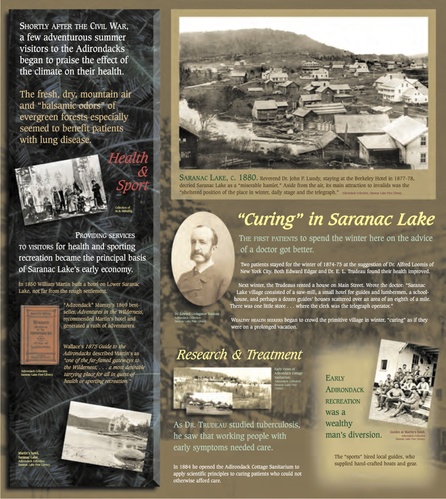 Exhibit Panel #1 created by Historic Saranac Lake on view at the Union Depot. Click on the image to enlarge. 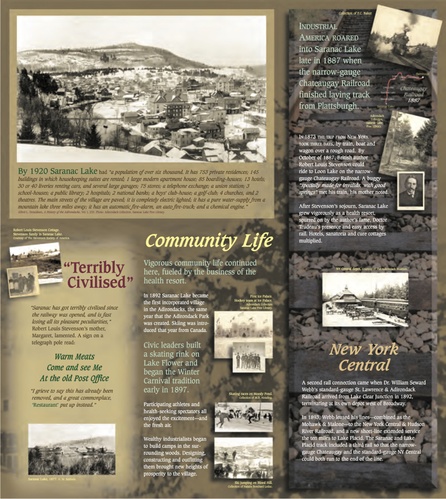 Exhibit Panel #2 created by Historic Saranac Lake on view at the Union Depot. Click on the image to enlarge. 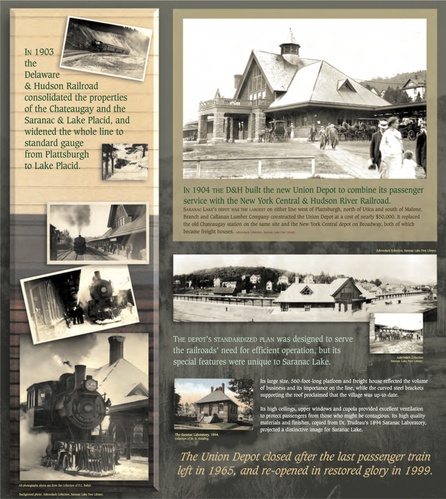 Exhibit Panel #3 created by Historic Saranac Lake on view at the Union Depot. Click on the image to enlarge. 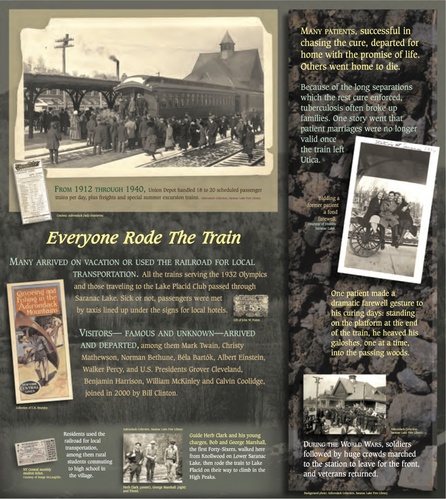 Exhibit Panel #4 created by Historic Saranac Lake on view at the Union Depot. Click on the image to enlarge.

1. Any building that handles passengers or freight is termed a station or depot, and a "union depot" is one which serves trains from more than one railroad