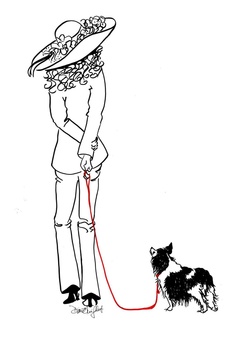 Title image from "A Life in Hats" Exhibit at Historic Saranac Lake, 2013. Illustration by Diane Leifheit 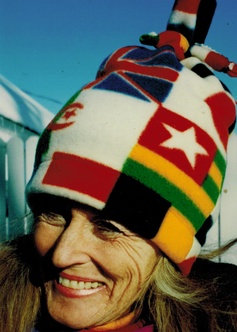 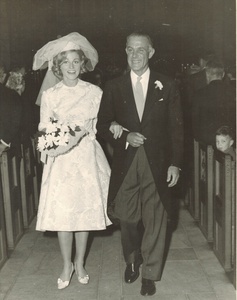 Ursula settled in Saranac Lake in the 1960s after meeting and marrying Dr. Frank Trudeau, the grandson of Dr. E. L. Trudeau. Ursula was the stepmother of Frank’s children from his first marriage, Garry, Jeanne, and Michele.

Ursula was a member of the Adirondack Artists Guild, and she served on the board of the Trudeau Institute. She was a recruitment officer for the 1980 Olympic Winter Games in Lake Placid and  attended the Winter Olympics in Montreal, Sarajevo, and Lillehammer. She was a patron of the arts in Saranac Lake. She worked as a fashion model. Hobbies included horseback riding, skiing, kayaking, and caring for her beloved dogs.  She was noted for her collection of hats from around the world.

Ursula Wyatt Trudeau, a long-time resident of Saranac Lake, died early Thursday morning, Dec. 5, 2019, at her residence at Saranac Village at Will Rogers. She was 87.

Born in Montreal, Quebec, on Jan. 17, 1932, the daughter of Col. Henry Johnston and Beatrice (Lyman) Johnston, Ursula showed an early talent in art and went on to attend the Ecole des Beaux-Arts de Montreal. Upon graduation, she pursued a career in freelance commercial art, including fashion illustration, hand-painted billboards, costume and set design for both theater and television, window displays and textile design. Following two years of working in Paris, she met her future husband, Francis B. Trudeau, MD, and they were married in 1960. Ursula moved to Saranac Lake and continued what was to be a long career in painting, exhibiting frequently in Montreal, Lake Placid, Saranac Lake and the Virgin Islands. She also used her remarkable talents on behalf of many local organizations, including the Adirondack Antiques Show, Pendragon Theatre, and the Saranac Lake Winter Carnival, which honored her as grand marshal in 2014. She was a member of the Adirondack Artists Guild and on the Board of the Trudeau Institute.

Among her many varied pursuits, Ursula loved gourmet cooking and especially skiing. She was a member of the Whiteface Mountain Ski Patrol and worked for the 1980 Winter Olympics in Lake Placid. Deeply fond of hats, she was a ubiquitous, colorful presence in Saranac Lake, and her elegance and ebullience always made an indelible impression on everyone she met.

Funeral arrangements are in care of the Fortune-Keough Funeral Home in Saranac Lake. A memorial service will be held at 11 a.m. Saturday, Dec. 14, at the Church of St. Luke, 136 Main St. in Saranac Lake.