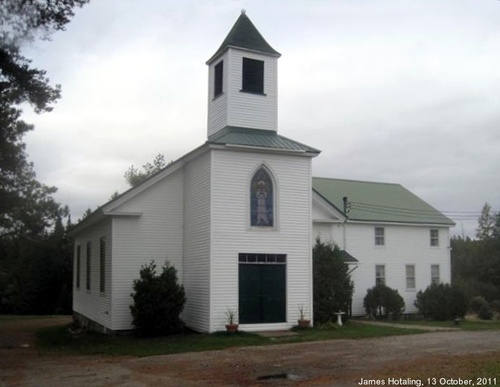 Vermontville Church of the Nazarene 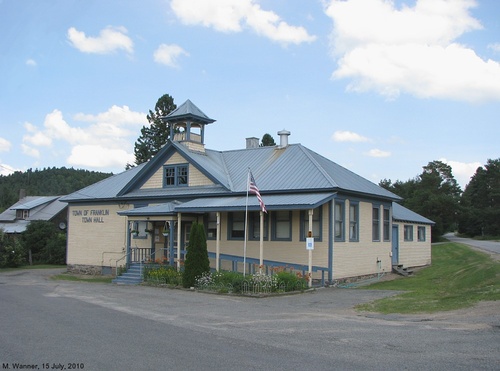 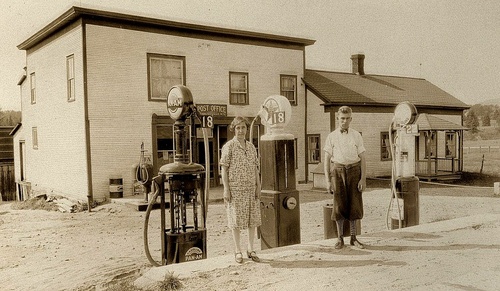 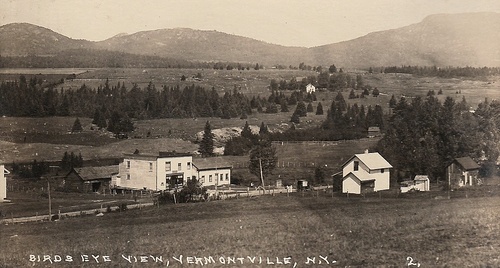 Rogers' Store and Post Office, with Kate Mountain at right
Courtesy of LuAnne Keith Riley Settlement of Vermontville started in the early 1800s, with most of the pioneers coming from Vermont. Teresa R. Eshelman wrote in the local series "They Told Me So" that Irish and English emigrants hired in the 1840s to cut timber ended up clearing much of Vermontville and as far as Sugar Bush and Alder Brook. Settlers from Vermont, Clinton and Essex counties came, attracted by the cheap land. By 1918, Seaver wrote, Vermontville was Franklin's largest hamlet. It had no industries except farming; a foundry built in 1861 had apparently closed by then, as had a sawmill built in 1848.

In 1878, the Vermontville School was the only school in the town of Franklin; it was across state New York Route 3 from where the town garage is today. Seventy-six of the town's residents between the ages of five and 21 went to school that year; an average of 26 showed up any given day.

Betty Goff Wilson wrote about her memories of attending primary school in a two-room schoolhouse in Vermontville in the 1950s that is the Franklin town hall today. Grades one through three were in one room, four through six in the other. 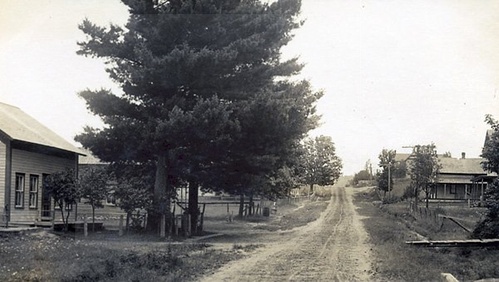 Vermontville Main Street, c. 1910
Courtesy of the Adirondack Experience
"Each day started with a recitation of the Pledge of Allegiance and the Lord's Prayer," Wilson wrote in They Told Me So. "On Monday mornings we each got a new drinking cup and had 'inspection,' which meant the teacher went up and down the aisles checking each student's fingernails, etc."

A cafeteria had recently been added to the school, and Wilson remembers helping the cook set the tables, dish up dessert and arrange condiments on the tables while in sixth grade.

The Sugar Bush and Vermontville school districts voted to send their high schoolers to Saranac Lake High School by bus in 1934, and Merrillsville, Loon Lake, Onchiota and Franklin Falls later did the same. Private contractors brought the high school children to and from Saranac Lake until these little districts throughout the town centralized with Saranac Lake in 1968. At the same time, the one-room schoolhouses closed and the younger children started to go to Saranac Lake as well. Some of these buildings were sold to private owners; others fell into disrepair or were destroyed by vandalism or fire.

The Rogers Store and Post Office were owned and operated by Elmer Rogers for 38 years.

Our election passed off, very quietly. Many of our voters could not be induced to attend. It is to their shame that such a report can be and is made.

Guiding has been very good during the season. Sporting is on the increase. Every year new hotels, are being built, additions to those already built are made, and camps and cottages are constructed on the shores and islands of all the lakes, especially on the three St. Regis Lakes and Osgood Pond. Hotel Ampersand, on the Saranac, is full of winter boarders. This work furnishes employment for many men until snow comes.

A. Banker has a lumber job near Clear Pond, or Saranac Inn. C. Dewey has one on Saranac River above Bloomingdale, and Mr. Hartwell has one near Round Pond.

There is to be a grand ball on Thanksgiving eve at Bloomingdale under the auspices of the Whiteface Monntain lodge, No. 789, F. and A. M.

M. D. Costlow has lost one of his matched pair of bays.

W. C. Skeels has added six to his family by marrying the mother of five children, Mrs. Wm. Daniels.

Mrs. Anna McKenzie is home on a visit to her many relatives and friends. Her husband, Albert McKenzie, is expected to return soon from Colorado.  --K

The day before Christmas was celebrated by the people of Vermontville by the opening of one of the handsomest rural churches in Franklin county. [The Methodist Episcopal church] replaces the tumbledown affair [perhaps a former school house] that has served the hamlet for many years, and which is the only protestant church in the entire town of Franklin. Rev. D. H. Martin, of Malone, commenced the movement for the improvement and, though the population is small and the community poor, he soon raised a handsome sum. The church has cost $2,200 and all has been paid except $500. It has a bell weighing 650 pounds which will ring out the gospel in the Adirondacks.

“Happy,” the famed captive bear of Alex's grove near Vermontville has reached the end of the trail.

Last week, “Happy” after nine years of revolt at his man-made captivity, was dispatched to happier days by his owner, Alex Terlizzi, who shot him.

The big bear—he weighed close to 600 pounds — had become increasingly difficult to handle as he grew older. Only recently he broke loose from his pen and attempted to maul Mrs. Alex Terlizzi and her month-old infant. Only after the courageous intervention of passersby was it possible to sidetrack the big animal back into his cage, thereby preventing a double tragedy.

Once back in his cage, “Happy" resumed his normal routine. But the desired to escape to the hills and forests which surround the grove proved too much for his wild temperament to withstand.

So, last week, he again tried to escape, and in his frenzied attempts to reach his native haunts on the side of Kate mountain the big animal tried desperate efforts which seriously endangered the lives, of the Terlizzi family and bystanders.

There was only one thing to be done. Regretfully, Alex Terlizzi brought out a heavy-calibered gun, loaded it with bullets and approached the animal which he had brought up from his cub days.

The heavy gun sang out its death message. “Happy” slumped to the ground where tourists for nine years had fed him ice cream cones, bottles of beer—he loved beer—and choice bits of candy. And thus ended “Happy's” nine years of captivity. Perhaps the big bear was glad that he died in this state, as he might have were he in the woods and fields of Kate mountain — by a hunter's ballet.

VERMONTVILLE, May 5 — Francis Yelle, 15, of this village was found late last night near the foot of Cate mountain. It is believed that she had been wandering about the woods throughout the day.

She disappeared from home early Monday morning after leaving a brief goodbye note to her family. Mrs. Felix Yelle, the girl's mother, immediately reported her disappearance to the state police.

A description of the girl was broadcast throughout the state over the police teletype system.

Believed to have been dissatisfied with having to attend school, no other motive could be discovered for her leaving home.

Tormey Hayden, [sic] postmaster at Onchiota, found her wandering about near the foot of Cate mountain late last night and persuaded her to return with him to her home, located about two miles from this village.

This 'N' That by Helen Tyler

We continue today with our story of Vermontville as it was 100 or more years ago. Vermontville had a foundry from 1861 to 1889. It was there that most of the castings, kettles, plows, cultivators, scrapers, and an unlisted number of smaller tools that were used in Franklin, Harrietstown, and Brighton, as well as in much of Essex and Clinton counties, were made. This foundry was also built on Lyon Brook, and just down stream from the Arnold (Fay) Mill.

A starch factory was built in 1873 and was located near the Eight-Square School House. The starch was made from potatoes that were grown in the vicinity, and was operated for three or four years by the builders, Capt. James H. Pierce, then of Franklin, and P. H. Shields of Malone.

Sheep raising was quite an industry at one time, and this led to the building of a cardiing mill by Mr. Perigo. This mill was also located on the Lyon Brook, but somewhat farther up stream than the saw mills. shingle mill, owned and operated by Albert Keith, was built still farther up the brook.

A Mr. Parks had a cooper's shop where he made wooden sap buckets, pails, barrels, etc. This was not too far from the eastern side of the mill pond. Levi Cass had a blacksmith shop near by, and a Mr. Paye had one across the mill pond, and a little to the north.

A man by the name of Baker was a shoemaker. H. J. Hathaway was the undertaker and had a shop where he made the caskets he used. His wife often did the lining of them.

A man by the name of Harrison Melvin had a shop where Roger's General Store now stands, in which he made and sold harnesses for horses.

The first church was built in 1856 when the Town of Franklin was only 20 years old. (That is the church which has now become, with some addition, the Church of the Nazarene.)

There was a good maple orchard, a large hop farm, also a large lumber camp on Merrill Mountain two miles or so to the west.

J. P. Mulligan ownwd a "large" store for general merchandise, and J. J. Alexander had one, somewhat smaller, close by.

When one looks back to those times, it seems that the Town of Franklin and especially Vermontville, must have been a much busier place than it is today.