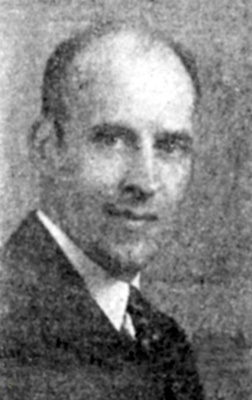 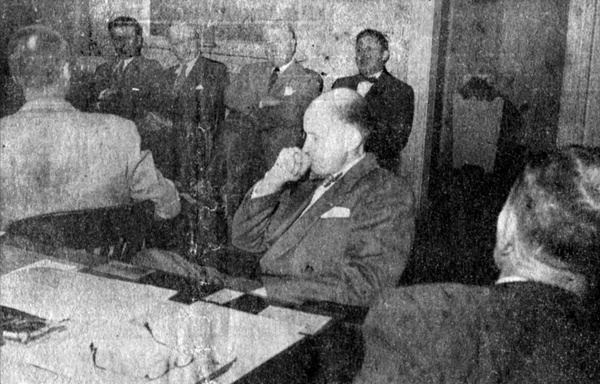 HEARING ONE of the five dentists In Saranac Lake give his views on fluoridation at a Village Board meeting last night, are pictured from left (back to camera) Trustee Edward Worthington, and (in background) Drs. Mr. R. Carlson, L.G. Farrington, E.F. Muffler and W.E. Taylor, Contemplating what is being said is Trustee Vernon Wamsgans, and Village Manager Frank Bunk, (back to camera). Not shown Is Dr. Vernon H. Jordan.
Adirondack Daily Enterprise, December 28, 1955
Vernon W. Wamsganz was the son of Henry and Mary Wamsganz. He was a Saranac Lake Village Trustee from 1954 through 1958, and served as chairman of the Republican Committee. He was an agent of the Prudential Insurance Company, at 52 Broadway, for more than twenty years. He served as the chief of the Saranac Lake Fire Department, and was head of the winter carnival ice palace committee for a number of years. He was also secretary of the Saranac Lake Chess Club.

He graduated from Saranac Lake High School in 1932. He lived at 16 Pine Street, where he was famous for his garden. He was a volunteer fireman, and chief from 1955-57. He was a member of the local Adirondack Masonic Lodge. In the early 1960s, he relocated to South Burlington, Vermont, where he was active in the fire department and in the Methodist Church.

Not since we can recall have the conditions been more difficult for Vern Wamsganz and his assistants in that job of building the Ice Palace as the feature of the Saranac Lake Winter Carnival. At times there was too much snow; at other times it was unbearably cold; then a sudden thaw would spoil freshly cut ice.

So it seemed that perhaps this year it just wouldn't happen. At least so it seemed a very few days ago.

But it IS going to happen, as anyone now can see. We are going to have our Ice Palace in time for the festivities, and it's going to be a beauty.

Those of us who appreciate it from the sidelines are grateful to those intrepid builders whom we watch at work with an ashamed feeling of non-participation.

I have been hoping for the past few months that I would receive a letter from one of my former classmates that there would be a reunion of the graduating class of 1932 from the Saranac Lake High School.

Unfortunately, no one has come forward to try to arrange a get-together of our graduating class.

I am asking you to print this letter for the fiftieth anniversary of the graduating class of 1932. We were the Olympics kids, just in the middle of The Great Depression. Some of us are now departed from this earth. Many of us are spread across these great United States and some are still living in Saranac Lake.

I still remember that morning we marched into the auditorium of the old Petrova Avenue high school to receive our diplomas on that Tuesday morning at 10 a. m. on June 28, 1932.

To each and every one, where ever you are, a happy fiftieth anniversary

At the Jayvee game yesterday there were of course many fathers watching their sons defeat Tupper Lake.

One group of "old men", however, viewed the proceedings from an especially good vantage point, standing on the press and radio platform.

Erwin Heck, Hayward Plumadore and Vernon Wamsganz had quite a workout up there. When Jim Heck plunged through the line, his dad hunched his shoulders and seemed to plunge with him. When Vernon Wamsganz, Jr., charged in from the end to make a tackle, Vernon, Sr. almost hurled himself off the platform. When husky Jan Plumadore lined up at center, his dad shouted. "Get low!" (Jim Heck, incidentally, scored two touchdowns on long runs and a point after touchdown).

Needless to say there was a steady flow of advice and admonitions from the platform, most of which was unfortunately (or fortunately?) not heard down on the field. A couple of times the Dads did note that the Junior Redskins had only ten men on the field and got word of this to the coach.

Fire Chief Vern Wamsganz has, and always has had, one of the nicest vegetable gardens in town. As a Village Trustee, he made the motion that a State of Emergency be declared by unanimous vote of the Village Board banning ALL use of Village water for lawns and gardens, last Friday noon.

As a result, Mr. Wamsganz has been making daily trips to Moody Pond with water buckets, a truck he borrowed, and two 50- gallon barrels, and driving home with enough water to moisten his garden.