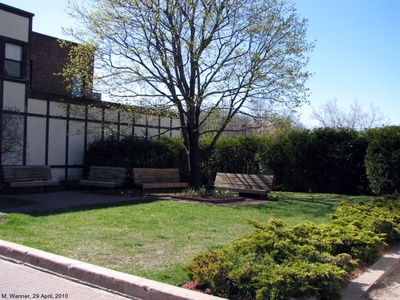 A pleasant place to sit and rest:

SARANAC LAKE — The Village Improvement Society (VIS) announced today that it had signed an agreement with Milo Moody, Jr., to lease the vacant lot at 96-98 Main St., for improvement at a fee of $1 per year.

The contract releases the property automatically if it is sold, with the provision that the VIS may remove any shrubs, flagstones, clenches or other movable improvements.

"The VIS is very grateful to Mr. Moody for the opportunity to create a vest pocket park in a location where it will be of benefit to the community as a whole," Mrs. Warriner Woodruff, VIS president, said.

The property lies between the Saranac Lake Free Library and the Blue Gentian Restaurant and across from the Hotel Saranac.

With extra money from the 1972 fund drive pledged to landscape the triangle at Upper Main and Pine Sts., the VIS plans only limited landscaping of 96-98 Main St. this fall.

"Probably we will lay a lawn and possibly plant a contour screen of cedars to cover the dropping corner at the left rear of the lot," Mrs. Woodruff said.

"While the visual improvement will be of benefit to Saranac Lake as a whole," she continued, "the VIS designs working parks. This will be a vest pocket park for adults — residents and tourists who are in the downtown shopping area and need a pleasant place to sit and rest. With the advent of 137 new housing units on Church St., outdoor spaces —parks — are going to be in-creasingly valuable to our village.

This does not mean that children will not be welcome in the 96-98 Main St. park. Indeed, located adjacent to the Library as it is, the VIS hopes on pleasant days the Children's Story Hour may be held in the little park. But the design and benches will be scaled to adult needs."

By a curious twist of fate the new park will occupy the site where the late Walter Sagendorf lived. When the Petrova School was built in the 1920s and the old high school, located on the site of the present Hotel Saranac, was to be torn down, Sagendorf headed a citizens' committee to create a park on the school lot. His campaign stressing the importance of a park downtown lost and the hotel rose on the property.

The Sagendorf home was gradually turned into apartments and business offices. In the winter of 1968 fire swept 'through the building displacing five residential tenants and two businesses.

Mr. Moody ultimately removed the burned shell of the building and levelled the little hill on which it had stood. The lot at 96-98 Main St. has been vacant since that time.

The VIS concluded negotiations to rent the empty lot, centrally located next to the Saranac Lake Free Library and across from the Hotel Saranac, from Milo Moody, Jr., in mid-August. The annual rent of $1 provides for immediate termination of the lease if the property is sold, that the with the provision VIS may remove such improvements as the cedar trees to another site.

Serafin Vasquez, locally famous for the gardens he creates annually around the Carson Building, 11 Woodruff St., undertook landscaping of the new park for the VIS. All work is being done on his advice and under his direction.

In mid-August Mr. Vazquez and Mrs. John Bourke, vice president of the VIS, stood on a lumpy site with a mound of earth in the center and a fairly steep dropoff in the rear. Dr. Donald Richter lent his roto-tiller, the Village of Saranac Lake transported it to and from the site, and John Fogarty ran it back and forth until there was smooth soil.

But still a big dropoff cut a sizeable chunk out of what was going to he a modestly sized park at best.

Richard Trudeau of Trudeau Sand and GraveLInc, arrived to study the problem and advised rough fill — sand with large stones to hold it in place. The fill was promptly delivered.

But Mr. Trudeau's payloaders were on a job out of town.

So last Thursday a payloader arrived after 5 p.m., and Alex Aubin proceeded to spread the fill, enlarging the park by a number of feet. Mr. Aubin, who is used to sidewalk superintendents, was not surprised to have them spring out of nowhere during the quiet evening hour. By the end of his job he was well supervised — from the sidewalk and from the balcony of the Hotel Saranac where many patrons of the weekly buffet found the payloader an added attraction.

And now to plant the grass — but a further obstacle presented, itself. The rough fill left a number of small stones on the site which would damage a roto-tiller.

The Senior Class of the Saranac Lake Central School had advertised to rake leaves as a class money earning project.

"They'rre wonderful,” said Mrs. Bourke, for whom seven turned up on their holiday, a bitterly cold, windy Oct. 9th, to hand pick many, many stones and pile them at the park side. Then they spread the peat moss and left the site ready for the roto-tiller. Seniors working with Mr. Rawdon included Cris Crowley, Margo Kampf, Mary Law, Jean Martin, Kathy Pelky and Kathy Tobin.

Wednesday Mr. Pratt put in the cedars. The small trees spaced to leave plenty of room for growth, soften the background of the park as they mark the boundary.

Yesterday Nature did her part by watering the new cedars with fresh rain.

Mr. Vazquez now plans to get the peat moss worked into the soil and plant a base lawn this fall.

In the spring the lawn wall be further planted and the creator of gardens expects to sew the seed for his floral display.

The VIS is also looking into acquisition of benches, as the vest pocket park is being designed primarily as a  pleasant place for citizens and visitors to sit and rest while they enjoy the downtown shopping area of Saranac Lake.

VIS will soon own the Vest Pocket Park

SARANAC LAKE - Mrs. Warriner Woodruff, president of the Village Improvement Society (VIS), has announced that Vest Pocket Park, adjacent to the library, will soon be owned by the VIS. Payment of taxes in the amount of $3,000 has been approved and the deed to the land will be transferred to the Society by the former owners, Milo Moody and Phillip Hyde.

Acquisition of the property has been a VIS objective ever since the wooden structure on its site, built by Walter Sagendorf, was destroyed by fire in 1968. For several years, the abandoned ruin was an eyesore on Main Street, until the VIS and library trustees obtained permission to raze the foundation and grade the land. Since then, under the supervision of Mrs. John Bourke, the plot has been seeded and planted with a colorful border of petunias cultivated by Earl Colby and Serafin Vasquez.