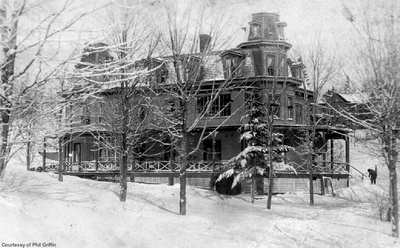 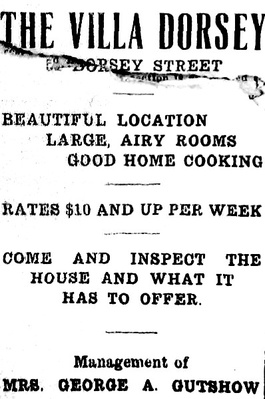 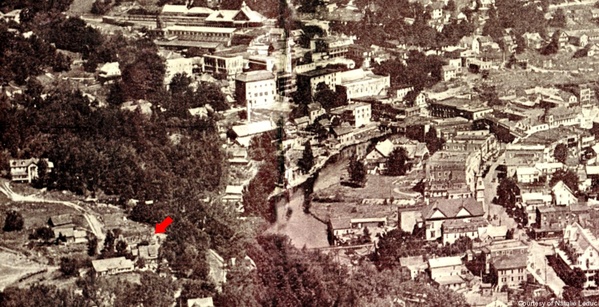 An aerial photograph showing the Villa Dorsey at lower left. From a 1923 brochure, "Saranac Lake, NY. The Health Centre of the Adirondacks Address: Torn down c. 1955, it was near where Dorsey Street intersects the LaPan Highway

The Villa Dorsey was built by Walter Channing Rice; it served as one of the first two cure cottages in the village. In 1902, rates were listed as "$2.50 per day, $12 per week up." U.S. President Grover Cleveland is said to have stayed there. 1

According to the 1916 TB Directory, the Gutshaw Cottage, run by Mrs. G.A. Gutshaw, had room for 20 patients, had two cure porches and charged $12-18 per week.

An advertisement in a January 1925 Enterprise, read "Those seeking comfortable winter quarters should be interested in a few vacancies. We have accommodations for twenty-five with five bathrooms and an abundance of hot water. Table excellent and of seasonable variety. Villa Dorsey, 51 Dorsey Street." 2

Rice built a wooden footbridge between the Villa and the old Harrietstown Town Hall before 1895.

It was the home of Father John Waterhouse, who lived there with his aunt Helen Casey, a teller at the Adirondack National Bank and Trust Company. Father Waterhouse was ordained at Wadhams Hall In Ogdensburg. 3

It was torn down to make way for the LaPan Highway in 1957.

It was in 1886 that Walter Rice built the large house on Dorsey St. that soon became known as the "Villa Dorsey." (This building was torn down a few years ago to make room for the LaPan Highway.) The Rices operated their house as a boarding "cottage," and it wasn't long before it was considered a "most fashionable" stopping place for tourists and health seekers. At about that time the village of Saranac Lake began to come into prominence as a health center for tubercular patients, and the Rice Cottage was one of the first two boarding cottages in the village to be operated as health cottages for tubercular patients. It was in this same "cottage" that the Rice's five sons were born, and it was there that their mother died in 1910.

[...] In 1885 Walter [Rice] married Laura J. Miller, the great-granddaughter of Captain Pliny Miller who was the head of the second family to settle at Saranac Lake.

In 1886 the Rices built a large boarding house on the left bank of the Saranac River where the LaPan Highway Bridge now crosses. The house came to be known as the Villa Dorsey. Its reputation was very good; and it was, along with the Evans Cottage, one of the first two curing cottages in the Village of Saranac Lake.

The Rices' five sons were born in the Villa Dorsey, and Laura Rice died there in 1910. Soon after his wife's death, Walter sold the Villa. [...]

The recent closing of the large hotels near us sends many boarders into the village. Villa Dorsey has eighteen guests and is daily receiving applications.

One of the finest boarding houses at Saranac Lake is the Villa Dorsey. which is situated on a hill of mild declivity, looking down upon the village, the Saranac River and Lake Flower. It is reached by foot bridge several, feet high, extending over the river, and by a pleasant carriage drive, which winds around maple trees, making the road cool and shady the most of the way. The house accommodates about thirty guests and is full nearly all the year round.

Mr. and Mrs. L. E. Schwarz of Stapleton, L. I., are new arrivals at the Grimmesey cottage on Doresy St. [sic] Mrs. Turner of New Cape May, N. J., is also a new guest at the cottage.

Sitting for the first time at a session of Supreme Court in Saranac Lake, Justice O. Byron Brewster of Elizabethtown reserved decision last week in the well known Villa Dorsey suit, which was brought against the village of Saranac Lake by Mrs. Florence Merry for damages which she claims was done to her property when a sewer was laid three years ago.

The plaintiff asks for damages of $15,000. Justice Brewster utilized the Broadway fire station as courtroom.

Justice Brewster was elected to the Supreme Court bench last November and began his judicial duties in January of this year.

...Back in '17 and '18, one of my mates when "chasing the cure" was Charlie Morrell—we naturally called him "Cap," because he had followed the sea for many years. He used to have some rare old yarns about foreign ports, and of the Islands. He sure saw some of the earth, and of the waters that cover the earth. One thing sure, he was faithful in taking the cure, and for that reason he's here in town yet. Don't know whether it means a thing, but the three of us who cured at Villa Dorsey in those years, and who are yet living— Charlie Morrell, Matt Ellis and I, have remained here all the time, so, in addition to taking good care of oneself, climate must have something to do with it…

Mr. and Mrs. Gutshow, [sic] proprietors of Villa Dorsey at Saranac Lake recently became lost on the side of the Ampersand Mountain and were compelled to spend the night out of doors. They reached home very chilled.