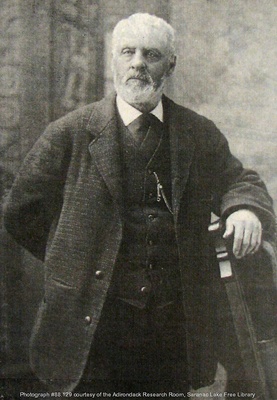 Virgil C. Bartlett was a hotelier and guide, who became famous for his hotel, known as Bartlett's, and for nearby Bartlett's Carry. He started by taking over William F. Martin's lease of the Miller's Hotel in Saranac Lake and ran it for two or three years. In 1854, however—influenced, no doubt, by what his predecessor had successfully done—Bartlett bought 267 acres of land on Upper Saranac Lake and built a small hotel of his own in what was then an extremely remote spot.

He chose a knoll of narrow ground between a deep bay on Upper Saranac and Round Lake. The distance between the two lakes made for a short portage and the place was soon dubbed Bartlett's Carry. The hotel was officially named "The Sportsmen's Home", but was generally known as "Bartlett's."