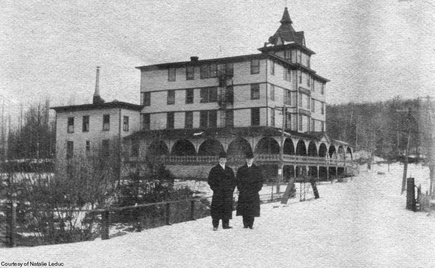 Two unidentified gentlemen standing on Ampersand Avenue in front of the Von Dorrien. The bridge crosses the outlet of Little Colby Pond. (undated) 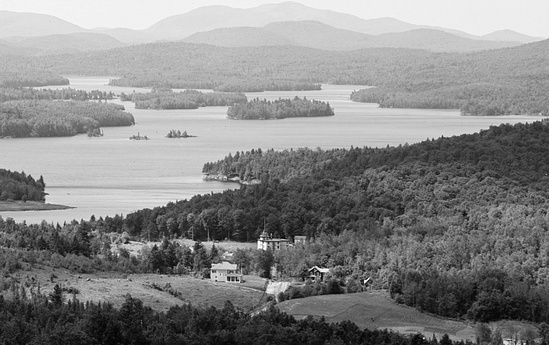 The Von Dorrien, center, at the intersection of Forest Home Road (not seen here; it starts just beyond the hotel) and Ampersand Avenue running towards the bottom of the photograph,
c. 1905. Library of Congress. 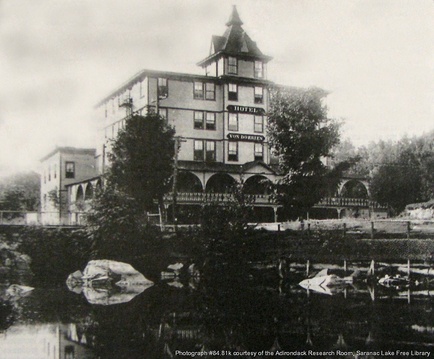 Address: At the entrance of the present day St. Bernard's Cemetery

Other information: Rates in 1905 were advertised as from $12 per week up. It was located where the gates of the St. Bernard's Cemetery are today; as the cemetery stones date to 1918, it is likely that the hotel burned or was torn down between 1915 and 1918.

Notice of Sale of the Del Monte Hotel, at Saranac Lake, N.Y. 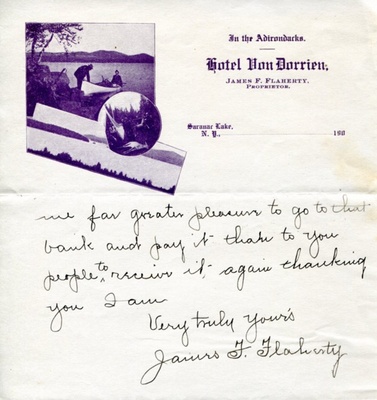 Pursuant to a judgment of foreclosure and sale rendered herein, on the 23d day of January, 1894, and duly entered in Franklin County Clerk's Office on the 24th day of January, 1894, I, the undersigned, the referee, duly appointed for such purpose by said Judgment, will sell at public auction to the highest bidder on the 10th day of March, 1894, at 2 o'clock in the afternoon, at the front door of the Berkeley Hotel, in the Village of Saranac Lake, Town of Harrietstown, County of Franklin, State of New York, the real estate directed by said judgment to be sold, and therein described as follows :—

All that tract or parcel of land situate in the town of Harrietstown, County of Franklin, and State of New York, being In township No. 21, great tract No. 1, of Macomb's purchase, being also part of 200 acres conveyed by John Demeret & Co. (Thomas Howe) to Millote Baker and more recently known as the Lamay lot, and more definitely described as follows, to-wit; — Beginning at a stake and stones on the south side of the new road leading from Chas. Greenough's house to "Forest Home" about eight links west from a hemlock stump, being the N. E. corner of the Greenough & Marhar lot, so called, thence South 5 chains and 75 links to a large hemlock tree standing on the South back of the stream or outlet of Colby Pond, being also N. 60deg. W. 1 chain and 71 links from the down stream corner of the saw-mill, thence Northwesterly along the Westerly shore of said stream to the said Forest Home road, thence Easterly to the center of the bridge across said stream, thence East along the center of said road about 7 chains and 50 links to the point of beginning, containing about 2 and 1/6 acres of land, be the same more or less. 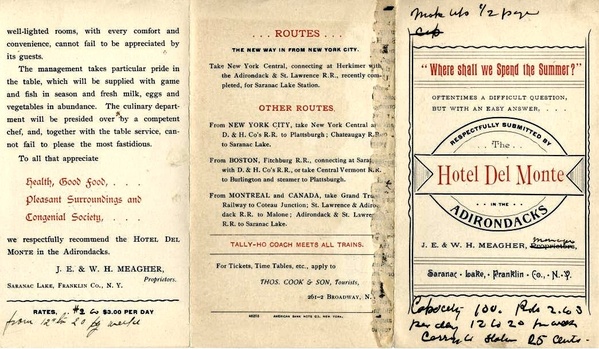 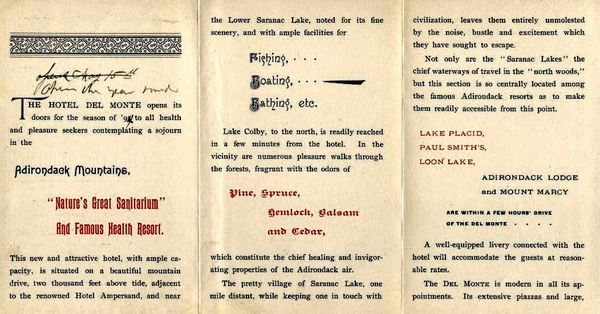 Reverse of advertising brochure for the Del Monte, c. 1893
Courtesy of Adirondack ExperienceHOTEL DEL MONTE, Saranac Lake, Franklin County, New-York. J. E. and W. H. Meagher, proprietors. Opened May 15. Board, $3 per day. About fifteen hours from the Greater New-York. Reached by the New-York Central and Hudson River Railroad to Herkimer, and thence by the Adirondack and St. Lawrence Railroad.

This hotel, the management announces, is modern in all it's appointments. It has ample capacity for guests, extensive piazzas and large, well-lighted rooms. The managers take especial pride in the table, which will be supplied with game and fish in season, with fresh milk, eggs, and vegetables in abundance. It is on a beautiful mountain drive, 2,000 feet above tide water, and near the Lower Saranac Lake, noted for fishing, boating, and bathing.  In the vicinity are numerous pleasure walks through the pine, spruce, hemlock, and cedar forests. Lake Colby is readily reached in a few minutes. Within a few hours' drive are Lake Placid, Paul Smith's, Loon Lake, Adirondack Lodge, and Mount Marcy. A well-equipped livery is connected with the hotel.

…The Hotel Del Monte, not far from the Ampersand, is under the management of Mr. C. F. Carpenter this year…

In 1905, the Hotel Von Dorrien ran this ad in the Enterprise

"Terms— From $12.00 a week up! As an inducement to the people of Saranac Lake to inspect his house, the proprietor will have a carriage call for anyone wishing to do so, at his expense."

The Von Dorrien is the first of the houses in the vicinity at Lower Saranac Lake to open for the season, Manager Flaherty having returned from Lakewood a fortnight ago and the first guests being now installed for the summer.

The Hotel Von Dorrien, near lower Saranac Lake, will be opened this summer under the management of J. F. Murphy, who will introduce the first cabaret in Saranac Lake.

A large crowd of sports attended the opening of the Von Dorrien in Saranac Lake Saturday night.

District Attorney Genaway and Sheriff Steenberge spent several days in Saranac Lake recently investigating complaints against two hotels in the Town of Harrietstown and two in Brighton for liquor tax law violations. Many witnesses were called in one of the Harrietstown cases, some of them young girls 20 years old and under, whom Probation Officer Barrett managed to find, and evidence enough was secured to hold Robert Wilson and Thomas Mulhall for the grand jury in bonds of $500 each for keeping a disorderly house. They were proprietors of the Van Dorrien, a hotel situated a short distance outside the corporation, and had started a cabaret in connection with the house which soon gave it an unsavory reputation. The complaint to the district attorney was lodged by the village board of Saranac Lake and the town board of Harrietstown. Other places in the town, against which there had been complaint, were warned and the "clean-up" has resulted in greatly improved conditions. The proprietor of a hotel at Gabriels against whom there had also been complaint for liquor tax violation was surprised when the district attorney walked in on him at about two o'clock last Wednesday morning and found the bar open and doing business. There was a dance in progress in a hall across the way and the hotel bar was under full swing. Mr. Genaway compelled the proprietor to close up at once and it is expected that proceedings for the violation of the law will be promptly instituted.

As. the culmination to a "clean-up” week in- and about Saranac Lake. District Attorney John W. Genaway and Sheriff Steenberge arrested Robert Wilson and Thomas Mulhall and arraigned them before Justice Seaver A. Miller at Saranac Lake on the charge of conducting a disorderly house, the place in question being the Van Dorien (sic) hotel on Ampersand avenue, in Saranac Lake. The complaint which led to the arrest of the two men was made by the Board of Trustees of Saranac Lake, the board acting with the district attorney's office in making an effort to put the "lid on and keep it on" in that village.

...[Brennan] was first connected with the Empire Hotel in Saranac Lake, after which he conducted the Delmonte, now known as Lakewood Inn. He built the block of which William Herron is the present proprietor, and acquired valuable property on Broadway...