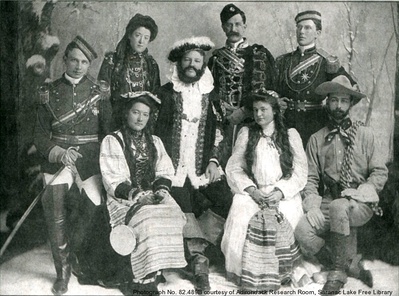 Costumed for a winter festival, a group of prominent, early Saranac Lakers sat for photographer George W. Baldwin. Most were here because of tuberculosis, their own or that of a family member. The cowboy is probably W. B. Trowbridge. The figure in the center, perhaps dressed as Henry VIII, is tentatively identified as Charles R. Henderson, Jr., and the fellow standing next to him as A. D. Moir. The young ladies seated in front are Janet Henderson, left, and one of her sisters. Undated, but taken long before color film was used, this photo was hand-colored. Adirondack Daily Enterprise, December 31, 2011 Born:

William B. Trowbridge owned property on Spitfire Lake near Paul Smiths, New York, that was later bought by Orm Ketchum. He was a member of the Saranac Lake Society for the Control of Tuberculosis c. 1910. He served on the 1902 Winter Carnival committee, and in the 1909 Carnvial, his wife won first prize in the Fancy Costume category. He also served as Rear-Commodore of the Saranac Lake Boat and Waterways Club in 1914.

W. B. Trowbridge, of New York, and, J. C. R. Peabody, of Boston, have settled the suit against them for having hounds in their camp in 1901, by paying a penalty of $200 and costs. The case has been tried twice in Malone.

On Wednesday, Aug. 19, Venetian Evening will be observed on Lake Flower and a parade of decorated boats will move around the lake. A large supply of torches and red lights have been purchased, and it is expected that the shores of the lake will prove a brilliant scene.

On Thursday the Regatta will be held. Among the donors of prizes are the following: