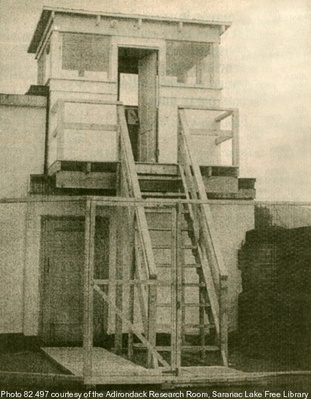 A Letter to the Editor of the Adirondack Daily Enterprise on October 9, 2012, reminisced about the Hotel Saranac: "I remember the civil defense tower on top, where we Boy Scouts waited to alert for Russian bombers." Jude Richardson, Cogan Station, Pa.

In 1952, a tower was built on Blood Hill as part of a cold war Civil Defense effort; it was staffed by volunteers.

Patients in Saranac Lake who want a share in the war effort have found an answer in the Study and Craft guild’s contemplated course in model plane building.

The project consists of building models of various types of fighting aircraft for army and navy pilot schools, and is believed to be the only such class for adults in the state. The program was designed primarily fur high school students. Adults may work on models at the school, or if patients, may work at their cottage. 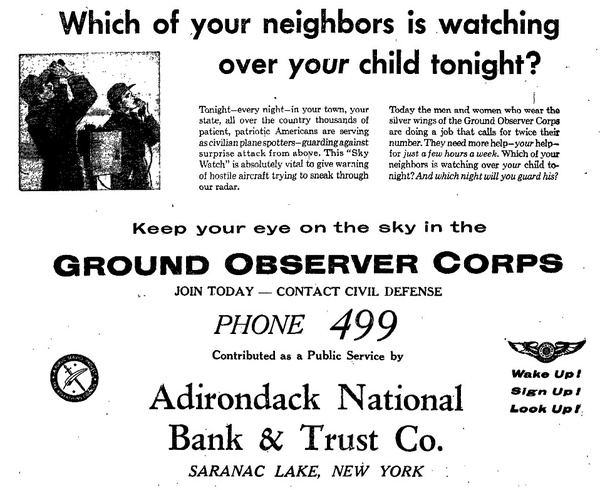 Adirondack Daily Enterprise, February 10, 1956
More than 40 patients at Trudeau alone have signified their desire to build planes. Models include the chief types of fighting planes used by the United States, Great Britain, Germany and Japan and will be used in army and navy schools in aircraft recognition training and gunnery sighting practice. They will also be used in the training of civilian airplane spotters.

Four volunteers went on duty at noon today in the newly constructed 28-foot observation tower at 15 1/2 Lake street [sic, 50 1/2 Lake Street]. The tower was erected by volunteer workers with the Village supplying, without charge, some of the needed materials for its construction.

The 24-hour duty, known by the code name "Operations Skywatch" has been set up as a means to increase the air defense potential of the United States Air Force.

Nineteen posts are scheduled to be in operation in Franklin County to be constantly on the alert for the possibility of enemy invasion by four engine bomber planes.

Saranac Lake requires a total of at least 60 volunteers in order to maintain two-hour shifts, one day each week. All men, women and boys and girls of high school age wishing to volunteer their services should get in touch with John K. Beardsley, Chief of the County service.

"Operations Skywatch" has been called by President Truman a "common sense precaution in which every citizen can co-operate to help prevent the war nobody wants."

The importance of Civil Defense and the need for volunteers to man a ground observation post in Saranac Lake were emphasized to members of the Women's Civic Chamber meeting in St. Luke's parish house last evening.

Robert Bogie, Franklin County coordinator who was responsible for arranging the evening's program, briefly explained the two outstanding purposes of the Ground Observation Corps in Saranac Lake. Mr. Bogie stressed its function in peace time as a means of help for scheduled airlines and private aircraft and secondly pointed out the responsibility of civilians in protecting cities which would be targets for enemy attack. He pointed out the importance of early detection of unidentified aircraft in averting possible disasters.

Lt. William Murray, Public Information Officer from the Albany Filter Station, outlined advances made during the last few years resulting in a greater need for ground observation. Lt. Murray pointed out that aircraft do not need stepping stones any more to cross continents. "The military is moving by air," he said, "and we must all be on the alert. The radar net is not infallible and that is why the Ground Observation Corps is needed to, fill the gap."

A film, Mrs. Jones, Meet Your Partner, shown by Air Force Liaison Sgt. Paul Terenzini, was designed, to emphasize the part played by the homemaker.

Capt. Dominic Giambruno, commanding officer of the Albany Filter Station, concluded the program by urging the cooperation of the Women's Civic .Chamber in setting up a Ground Observation Corps here.

An observation post is under construction on top of the Hotel Saranac and it is hoped that work will be completed by early February.

Volunteers will be needed for two hour shifts each 168 hours a week.

Tentative plans were made for a similar meeting in late February. All organizations and interested people will be invited...

Our Town seems to have been hit by the Air Force bug during the last few weeks.

Perhaps you have noticed the sudden interest that the Women's Civic Chamber has taken in this fine organization. Due to their hard work and skillful management, the women have been able to arrange for the Air Force Band to be in town over the Saranac Lake Winter Carnival Weekend to take part in the big parade.

Many generous citizens have opened their homes to these airmen for the weekend..

The Air Force is also appearing here now in the form of the Ground Observer Corps, They are campaigning for new members, giving citizens of Saranac Lake an opportunity to play a part in the defense of their country.

In the event of an attack on large cities, Saranac Lake's food supply would be cut off and the 7,000 friendly people would become 7,000 starving people. In addition to this danger many of us have friends and relatives living in the enemy target areas.

Help can be given to all by giving up a few hours a week and aiding those who have been guarding lives in the G.O.C.

The Ground Observer Corps along the perimeter of the United States no longer will be on 24-hour sky scanning duty. Instead the Corps will be placed in "Ready Reserve" as of January 1.

Wiliard L. Utting, Saranac Lake post supervisor for the GOC, this morning said that he and Alton B. Anderson, chief observer, "need 12 or 15 experienced observers" for the Ready Reserve, people who could be on duty in half an hour in case of an emergency. The group will meet once a month for training and discussion.

Notice of the new status of the GOC was received from Lt. Gen. C.R. Huebner, director of the New York State Civil Defense.

In his letter, Gen Huebner says, "The continued extension and improvement of the North American Air Defense Command's electronic detection system must, necessarily be reflected in changes in our overall system of air defense, including the support activities of the Ground Observer Corps. The completion and success testing of the Distant Early Warning Line and its seaward extensions provided by airborne radars and Navy picket ships furnishes strong assurance of sufficient warning time to alert the Ground Observer Corps for emergency duty."

Gen. Huebner does not say anything about the effect of missile warfare on the warning system.

He urges that observation posts be maintained "in a constant state of readiness, with a full compliment of trained volunteers capable of manning the post during an extended emergency."

"The telephones presently in the posts will not be disconnected", Gen. Huebner states, "and the posts must be inspected frequently to ascertain that they are in good repair, providing adequate shelter, heat, ventilation, light, needed equipment and facilities."

The Saranac Lake post is atop the Hotel Saranac.

Mr. Utting says that he and Mr. Anderson will have keys to the post. He notes that there is $1,000 in the village budget for Civil Defense and says he believes it should be used for that "and that only." He says he thinks a Civil Defense village director should be appointed soon. The last director was T. Jefferson Newbold, who [resigned] because of ill health.

An article in Adirondack Life magazine by Lynn Woods, "The Woods in Wartime: How Adirondackers soldiered on  through blackouts, rations and widespread worry," refers to plane-spotting observation posts on page 44, though not specifically in Saranac Lake.