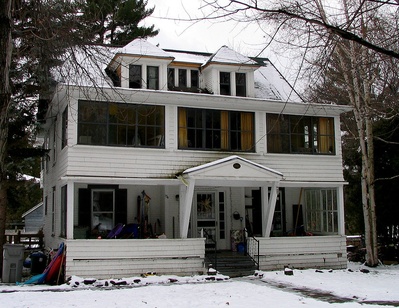 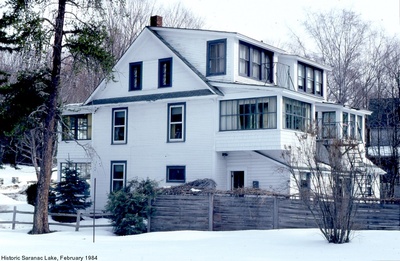 Other information: A Colonial Revival-style, two-family house that evolved into a cure cottage. A total of eight cure porches have been added to the structure.

By 1913 the house had been leased to Anna McCaffery who may have managed the house as a nursing cottage, and, in 1914, it was managed as a boarding cottage by Estella W. Knabe, who came to Saranac Lake with her husband, who had TB.

According to the 1916 TB Directory, the Knabe Cottage, run by Mrs. Otto Knabe, had room for seven patients, had two cure porches and charged $12-25 per week.

In 1934, it was registered with the T.B. Society by Alfred and Ethel Nickerson Walker as a nursing cottage for eight patients at rates of $25 to $35 per week. Patients included Hispanics, Asians, and Norwegian sailors.

Elise Chapin was a patient in this cottage in the 1930s.