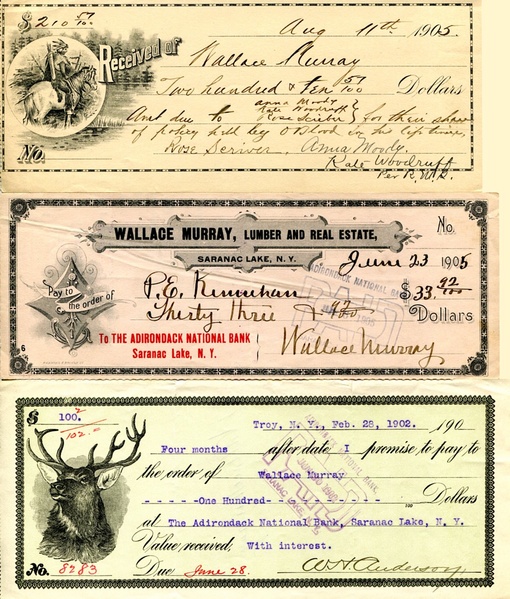 A receipt, a check and a promissory note of Wallace Murray from the early 1900s. The receipt is for the purchase of a policy of Orlando Blood, presumably from his heirs.

Wallace "Wal" Murray was an early resident of Saranac Lake, and was elected the third Village President in 1896, serving two terms. He was an investor and an entrepreneur. He was the proprietor of the Riverside Inn, and sold it in 1899; and he was the founding president of the Saranac Lake Light, Heat, and Power Co. in 1894, which was bought by Paul Smith's Electric Light and Power and Railroad Company in 1907. He also established power companies in the Ausable Valley and in Port Henry.

He built the house at 8 Pine Street.

Tony Goodwin has written a short biography of Wallace Murray.

Long Life of Prominence In Saranac Lake Closed by Death on Sunday of Veteran Hotel Man, Property Owner and Leader

Funeral services for Wallace Murray, colorful citizen of Saranac Lake for three-quarters of a century, will be held tomorrow morning at 11 o'clock at the Murray home on Pine street. The Rev. Frank W. Bevan, pastor of the Methodist Episcopal church, will officiate.

Confined to his bed during the last year, he succumbed early Sunday morning, bringing to a close a varied and useful career during which he was twice village president, owner and manager of the Riverside Inn, and a prominent figure in civic affairs. He was 83 years of age.

Histories of the Adirondack number "Wal" Murray, as he was familiarly known, among the pioneer residents of this community, though he was not a native son. He was born September 25, 1849, in Brookfield Vt., and first came to New York state at the age of six, when his parents, Mr. and Mrs. Orren Murray, settled in Keene.

He was 16 when he first came to the then tiny hamlet of Saranac Lake, where he was to live out the remainder of his life. Hemmed in by the mountain wilderness, the village had a total population of some 500 persons, who earned a livelihood hunting, trapping, guiding and lumbering.

It was 19 years before Dr. Edward Livingston Trudeau erected "The Little Red," the first milestone on Saranac Lake's long road to victory in the fight against tuberculosis, that Wal Murray took to the woods, as a lumberman. For several years he felled trees, took part in log floats down the Saranac river and experienced the life of the lumber camps, later turning to the profession of guiding.

In 1888 he became owner of the Riverside Inn, already famous as Blood's hotel, one of the principal buildings in the village. It had come into Orlando Blood's possession in 1865, and was operated until 1886 by Charles H. Kendall, when it was subleased to George A. Berkeley until his death two years later.

With Cyril Carpenter as manager, the hotel added to its reputation in the Adirondacks and prospered until in 1892, the front section was built and it assumed it's present appearance.

There he entertained Governor Roswell B. Flower at a dinner famous in Saranac Lake's history, when the breadth of river passing through the village was officially named Lake Flower. Grover Cleveland president of the United States, was also one of Mr. Murray's guests here. In 1899 he sold the hostelry to Pine and Corbett.

Among his business activities was the building of an electric light and power plant at Port Henry, subsequently purchased by the Paul Smith's Electric Light and Power company. Mr. Murray also, held extensive properties in this section, including the Currier Press block, the Utting block, and large tracts of land outside the village corporation.

Active in civic affairs, he was the fourth village president, serving for two terms, after the incorporation of Saranac Lake in 1892.

Approximately 40 years ago, he was married to Miss Charlotte Gillmore of Keene, who passed away in 1922. His only survivor is a niece, Mrs. Helena Vandenberg Ramsey of Boston, Mass.

Funeral arrangements are being made by James A. Fortune & Co.

Wallace Murray has the contract of removing the stumps from the river at Saranac Lake. Five thousand dollars will be expended.

From Riverside Inn by By John J. Duquette

Known as "Wal" to his many friends, Murray was very like Orlando Blood. He was every bit as shrewd a business man and was also extremely well, liked in the community. He had been a guide and a lumberman before purchasing the hotel and these prior pursuits afforded him a well-rounded knowledge of the area and the people.

Six years after he bought the hotel, he teamed up with Blood to form the Saranac Lake Electric Company and bring electric service to the village. The company purchased the Steve Merchant sawmill and converted the water powered plant to a hydro-electric generating station. Murray then entered into politics and served two terms as village president. The Riverside Inn continued to expand until it reached four stories high and filled the entire block between River Street and the Main Street bridge. With its two-tiered wrap-around porch it made an impressive structure. The dining room boasted an extensive menu which attracted guests from as far away as Malone to savor the house specialties. Appetizers featured such delicacies as blue point oysters, artichokes, or Kennebec salmon. Green turtle soup would lead to such entrees as lobster, broiled squab, breast of bear, or Egyptian Quail on toast. For dessert one could select Charlotte Ruse, peach trifle, orange meringue pie, or fruit pudding with brandy sauce. The Waldorf had nothing on the Riverside!

Wal Murray was a true entrepreneur. In the 1906 village directory his occupation was listed as "speculator." He was on good terms with Governor Roswell P. Flower and was instrumental in the naming of Lake Flower in honor of the Governor. He was also quite generous and many residents "hard up against it" knew where to go for a loan.

WALLACE MURRAY OF SARANAC LAKE DEAD AT AGE OF 83

For Many Years Prominently Identified With Adirondack Lumber and Hotel Business

Wallace Murray, better known among his intimate friends as "Wal," died at his home in Saranac Lake at 4 o'clock last Sunday morning, aged 83 years. Mr. Murray had been ill for several months before the end came.

Wallace Murray first went to Saranac Lake in 1865 as a backwoods boy of 16 years. He was born in Brookfield, Vt., the son of Mr. and Mrs. Orren Murray, who migrated to Keene when "Wal" was a boy of six years. He became a lumberjack soon after his arrival at Saranac Lake, and soon after joined the ranks of the old school guides. As he grew to manhood he became interested in lumbering as a business and eventually became one of the leaders in the industry in the eastern Adirondacks. In later years he became financially interested in the Port Henry Light and Power Company when that organization was formed, and continued to be deeply interested in the success of the business until recent years. In his early manhood he ventured into the hotel business, conducting a small tavern at the site of his late home. Through an alliance with Orlando Blood, founder of Blood's hotel, he became the owner the Riverside Hotel in Saranac Lake in 1886, and five years later introduced electric lights to Saranac Lake. He built a small power plant that supplied current for Illumination of the hotel and a few stores, and later for a considerable part of the village up to 1905.

A staunch supporter of Gov. Roswell P. Flower, Wal Murray took an active part in his campaign in this section and when the governor facilitated the improvement of the lake in the heart of the village, Wal held a ball at the Riverside in his honor. In 1894 when the lake was given its present name of Lake Flower.

He was host to President Grover Cleveland at Riverside Inn and recalled the days when John Brown visited in Keene when preparing his "Underground railway" for runaway Negro slaves.

In addition to his many business activities, Wal Murray took an active part in village affairs and became its third president in 1896 serving for two terms.

Forty years ago he married Miss Charlotte Gillmore of Keene. She died 11 years ago.

Funeral services were held at the Murray home in Saranac Lake yesterday (Wednesday) morning at 11 o'clock, Rev. Frank Bevan, rector of the Methodist Episcopal church in that village, officiating, and the interment was at Keene.

The "How To Get Well Book," has had so large a sale since the publication of the first edition here in January, that it has been found necessary to have it printed in large numbers in Utica. Mr. Wallace Murray of the Riverside Publishing Company, is contemplating installing presses exclusively for this booklet.

Historic Saranac Lake has a collection of some of Wallace Murray's business papers from 1894 to 1907. Three of them are shown above, and others appear in the pages listed below: 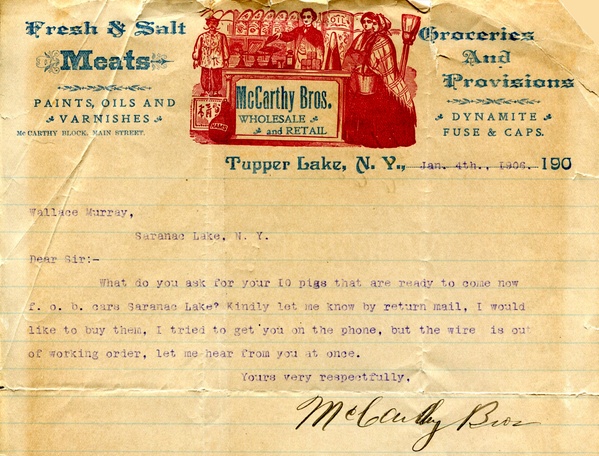 Summary of statements from establishments outside of Saranac Lake:

A promissory note was a wonderfully simple document c. 1900. Ninety-five dollars would be worth about $3000 in 2022.  Note that the interest rate of six percent, was not specified, but was paid, nevertheless. The stamps are not affixed to the other two notes.