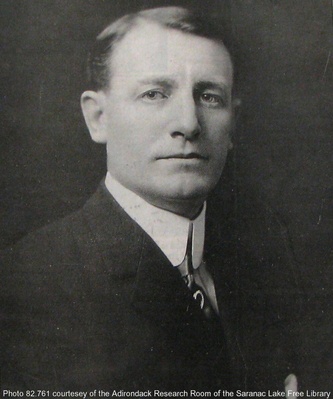 Walter Herbert Cluett was a member of the Cluett family of Cluett, Peabody & Company in Troy, New York, manufacturer of Arrow Shirts.

He founded Duryee & Company in 1909 with George V.W. Duryee and Eddy Whitby, which specialized in renting properties to prominent or prosperous health seekers and summer vacationers. The same three men organized the Rockledge Company to build Saranac Lake's second exclusive subdivision. Walter Cluett had been instrumental in hiring the Olmsted Brothers firm to prepare the village improvement plan, and the same firm was retained the following year to lay out a subdivision plan. Located on 73 acres of Colonel Milote Baker's farm, Rockledge included almost all the land between East Pine Street and the Saranac River, in addition to a quarter of Moody Pond. It was laid out in fifty lots ranging from 1/3 acre to three acres in size. Physically separated from the village center by Helen Hill - although no farther than Highland Park - the area seemed remote and was slow to develop. Only six houses had been built on Rockledge Road by World War II.

SARANAC LAKE, N. Y., July 16.—Of the large Summer colony at Saranac Lake many are active members of the new country club, which has leased the clubhouse and grounds of the erstwhile Ampersand Golf Club on Lower Saranac Lake. Dr. Joseph Longworth Nichols, President of the club, with his bride, has returned from a European tour and is staying at the Nichols mansion in Highland Park.

Walter H. Cluett of Troy is developing a fine country place, Rock Ledge, near the base of Baker Mountain, and has a landscape gardener in charge of the spacious grounds.

Dr. N. B. Leggett of New York is a Summer visitor here, and is occupying the Westhoff villa.

Isaac R. Pennypacker of Philadelphia has taken one of the large Larom cottages on Highland Park, which adjoins the Summer home of Mr. and Mrs. Samuel L. Shober, also of Philadelphia.

Rockledge, on the side of Mt. Baker just outside Saranac Lake, the home for some years of Walter H. Cluett has been sold to Gerald Jackson of New York. Mr. Cluett is a member of the firm of Cluett, Peabodv & Co, of Troy.

THE PEOPLE OF THE STATE OF NEW YORK

TO: Eugenia M. Cluett
Eugenia M. Cluett as General Guardian of Mary E. Cluett, a minor
Walter S. Cluett
Mary E. Cluett
George B. Cluett 3rd
Marion T. Kelsey
Joseph Gracia
Allison M. Hall
W.F. Kollecker
Allan P. Whittemore Jr.
Curtis K. Thomas
Upon the petition of Constance Cluett Sage who resides at 791 Park Avenue, New York City, New York, you are hereby cited to show cause before our Surrogate of the County of Franklin, at the Surrogate's Court of said County held at the Court House in the Village of Malone, in the County of Franklin, on the 19th day of June, 1961, at ten o'clock in the forenoon of that day, why the account of Constance Cluett Sage as Executrix of the Estate of George B. Cluett 2nd, late of the Town of Harrietstown in said County, should not be judicially settled and allowed and why the Estate Taxes should not be apportioned among the persons benefitted and why the persons benefitted should not be directed to pay to the said petioner the amounts found to be due and owing by them, respectively, pursuant to Section 124 of the Decedent Estate Law.
IN TESTIMONY WHEREOF, we have caused the seal of our said Surrogate to be hereunto affixed.
WITNESS, HON. ELLSWORTH N. LAWRENCE, Surrogate of said County at the Surrogate's Office in Malone Village in said County, ttiis 9th day of May, 1961.
Cecille B. Revoir
Clerk of the Surrogate's Court
Pub: May 17, 24, 31 and June 7, 1961