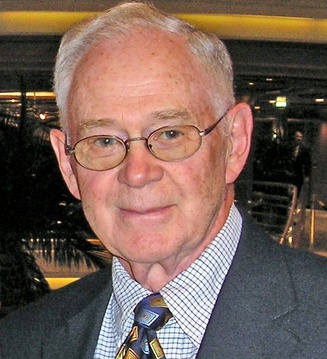 He attended St. Bernard's School and was graduated from Saranac Lake High School. He is a veteran of World War II and while in service he attended the University of Delaware under the Army Specialized Training Program, after which he served with the 86th Infantry Division, and the 91st Inf. Regimental Combat Team , stationed in the Philippine Islands.

Upon his return from military service he was associated with Wilson Clothing Co. of Saranac Lake for thirty-eight years; becoming manager and partner in the firm. In 1985 he became affiliated with National Army Store in Saranac Lake until it's closing in 1992. Mr. Duffy has been semi- retired and has worked part time as a tourist information specialist with the Saranac Lake area Chamber Of Commerce for the  several years retiring in November 2007. He was name Winter Carnival King in 2002.

Water H. 'Bud' Duffy [published on the occasion of his being named King of the Winter Carnival]

He started working for his father, who managed Wilson's Clothing Store, the site of the present Blue Line Sport Shop; at the age of 14. Duffy later made manager and worked in that capacity until the store closed. Then he worked in a similar position in the National Army Store, where the Adirondack Eye Care offices are now located. He is presently employed at the Saranac Lake Chamber of Commerce two days a week as a tourism information specialist, where he is able to draw on his long-standing and extensive knowledge of the area.

Duffy has been a member of the Knights of Columbus for 45 years, is a volunteer driver for Meals on Wheels and is a former board member and treasurer for the Chamber of Commerce, He served on the Board of Directors of the General Hospital, is a scoutmaster for Boy Scouts of America, is a member of St. Bernard's parish and choir and lecture for Sunday Masses. He helped organize and develop the Christian Family Movement in Saranac Lake. He volunteered for the Bishops Fund Appeal, the St. Bernard's School Spring fund raiser. He is presently the treasurer of the Lions Club and has transported eyes to airports and other destinations so they could be used for transplants. He donates handcrafted signs for fund raisers, has been a parade judge for Winter Carnival and has assisted in building floats.