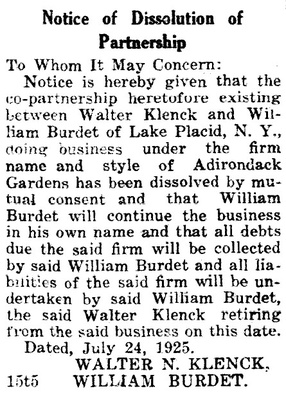 Mr. Klench died suddenly of heart trouble. There had been no previous indication of illness. He was buried last Friday in Evergreen cemetery, Los Angeles. He was a member of the Masonic Lodge of Lake Placid. A Masonic service was read at the mortuary and the service of the Showman's Association, of which he was a member, was used at the grave. Mr. Klench has been in the theatrical business for several years. He was a veteran of the World War.

He was born in New York city December 21, 1893. He is survived by his widow, Marie Anna, and two brothers. He and his wife were married in Lake Placid 10 years ago, the ceremony being performed at the home of Mr. and Mrs. Ross McKenzie.