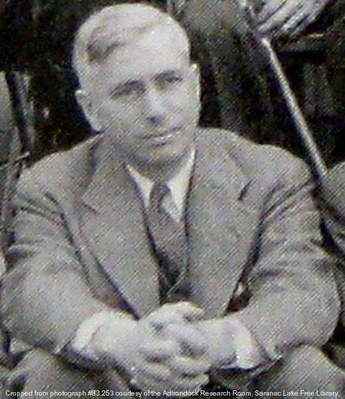 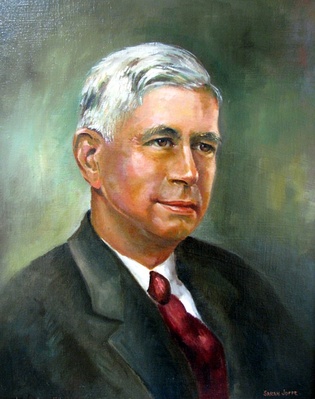 Dr. W. (William) Warriner Woodruff, known as "Woody," came to Trudeau Sanatorium as a patient in 1930. He left briefly, but returned in 1932 to take up medical practice that he continued until his death. He was also the president of the Saranac Lake Board of Education for fourteen years ending in 1960. He was a World War II veteran, stationed in the South Pacific in World War II.

Undated, unidentified clipping in a scrapbook at the Saranac Lake Veteran's Club.Dr. Woodruff had a platform tent camp on Lower Saranac Lake, now site #38, where he spent time with his family and friends in the summer, including the family of Kirby S. Howlett, Jr.

From the Adirondack Daily Enterprise, October 14, 1964

Dr. W. Warriner Woodruff, noted Saranac Lake surgeon and president of the board of education for 14 years, died yesterday evening at the Will Rogers Memorial Hospital.

Dr. Woodruff, 66, was honored last night by the present school board which passed a resolution that the proposed new elementary school be "dedicated in the honor and memory" of Dr. Woodruff.

Services will be at 11 a.m. Friday at the Saranac Lake Presbyterian Church. Members of the medical profession will act as honorary pall bearers.

Dr. Woodruff died at 5:30 p. m. Tuesday. He had been taken to the Will Rogers Monday after suffering a stroke.

Dr. Woodruff was born in Mobile, Alabama, the son of William L. and Bertha Warriner Woodruff, on February 23, 1898. In 1933 he married Gertrude Stratbucker in Detroit. Mrs. Woodruff survives him. Also surviving him are his daughters, Mrs. Elizabeth Pine of Rochester, Mrs. Barbara Gould of Boston and Miss Emily Woodruff of New York City, and his sister, Emily J. Woodruff of Detroit.

Dr. Woodruff was graduated from Harvard Medical School in 1924. From there he went to the Henry Ford Hospital in Detroit where he studied surgery from 1924 to 1936. In 1927 he became assistant resident and then resident. He left Detroit in 1930.

Also between 1926 and 1927, Dr. Woodruff studied pathology at Strong Memorial Hospital in Rochester. In 1931, he was at the University of Michigan as a fellow in thoracic surgery.

In 1930, Dr. Woodruff came to Trudeau Sanatorium as a patient, was cured, went to Michigan in 1931, and returned to Saranac Lake to practice medicine in 1932.

In 1942, Dr. Woodruff was elected to the Saranac Lake School Board.

Among the new programs started under Dr. Woodruff's leadership on the school board were a guidance department, adult education, more social studies, special music and art courses for Junior High and physical improvements to the school plant.

In 1944, Dr. Woodruff went off to war. At the time he was President of Rotary. He reported to Carlisle Barracks, Pennsylvania and was made a Major. From there he went to Guam in the Pacific and his work there was mentioned in the book, Surgery in World War II. Dr. Woodruff returned to Saranac Lake in 1946 and was joined in practice by Dr. Carl G. Merkel.

Dr. Woodruff has published over 15 articles in medical journals on chest surgery and related fields. He has written much on the subject of tuberculosis.

Friends may call at the Fortune Funeral Home beginning this evening.

The services at 11 a.m. Friday at the Presbyterian Church will be conducted by the Reverend Alexander J. Morrison. Burial will be in Pine Ridge Cemetery.

The family has requested that those wishing to honor the memory of Dr. Woodruff do so by making donations to the building fund for the new Saranac Lake General Hospital.