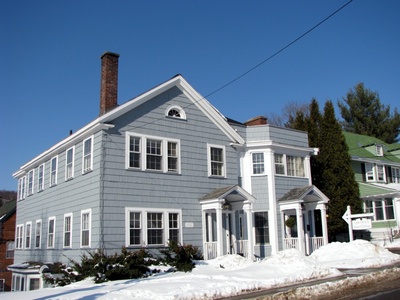 The land on which the Werle Cottages stood belonged to farmer George Washer and his wife Emily Washer, as early as 1875. Their daughter, Emma married Warren J. Slater, a guide, built the house by 1879. It was subsequently enlarged to about four times its original size, with several added wings and fourteen cure porches.

Edward LaBounty, a livery owner, and his wife, Mary Jane Snye, purchased the property, and ran it as a private sanatorium.

In August, 1923, 2 Church Street was acquired by two women who had become friends while curing at the Meagher Cottage, Aletta Werle and Jane Schneidawind. Two years later, they leased 110 Main Street, buying it outright in May, 1929. Although Jane Schneidawind was the business manager of the operation, the two cottages were advertised as "The Werle Cottages."