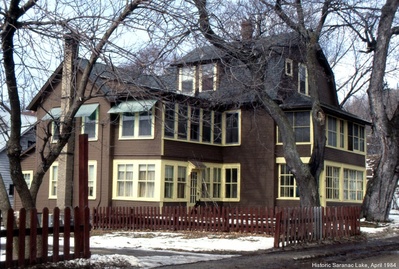 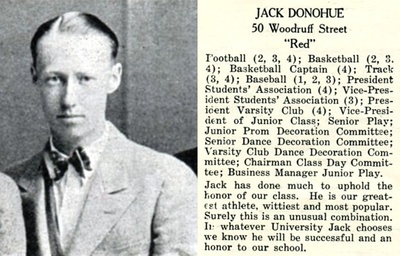 Other information: The Whitman Cottage was built (at least in part) between 1894 and 1896 on land that was originally part of the Eleanor Neal Lot.

In November, 1855, Captain Pliny Miller gave a 100-acre parcel to his daughter Eleanor, wife of Alanson B. Neal.

In May, 1884, George E. and Lydia E. Johnson paid Julia Miller $400 for a six acre wedge of Eleanor Neal's original lot. They in turn sold one-fifth of one acre to Edwin and Mattie Johnson for $75 in January, 1894, upon which the Johnsons likely built at least a part of the house that later occupied the site. In September 1896, less than three years later, they sold the same piece of property to George and Harriet Randall for $600.

Henry M. and Mary L. Prime of Keeseville paid the Randalls $900 for the house in April, 1900; and they sold it to Etta J. Whitman about 12 years later. Etta Whitman was the first owner to operate the house as a private sanatorium. She ran it as a boarding cottage until November 1920, when she sold it to Margaret Merrill, who also used it for a boarding cottage. It was probably Etta Whitman who added the cure porches; and she may have added the entire larger east-west wing of the house.

Margaret Merrill sold the Whitman Cottage to Rocco and Angiolina Laraio in October 1921, who had bought it for investment purposes. They paid $6000 and sold it five months later to Elizabeth Tolbert for $7400. In 1922 the bill of sale listed hospital beds and porch cots.

Mrs. Tolbert, whose husband Chester was a barber, operated the Whitman Cottage as a rooming house. In 1925 Mr. and Mrs. Tolbert and their son John occupied the house along with fifteen lodgers — ten men and five women. Only one of these was a patient: 21-year-old John McBride who was here from Ireland with his cook, Anne McCran.

In 1982 John P. Tolbert owned the house, which had been converted to apartments. In the late 1970s and early 1980s, Mr. Tolbert kept a horse in the stable behind the house. Hitched to a sulky or light carriage, he drove picturesquely on Park Avenue, evoking the quieter lifestyle of an earlier day.

In 2010 the Whitman Cottage is unrecognizable; it was gutted and almost completely rebuilt in its conversion to an outpatient facility for St. Joseph's.