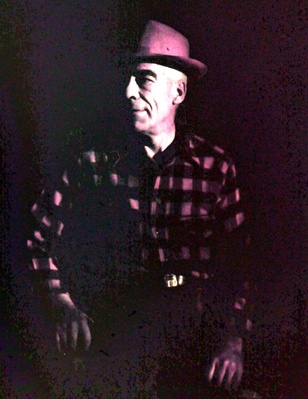 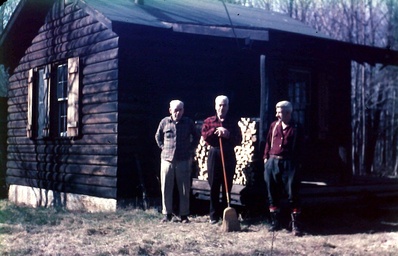 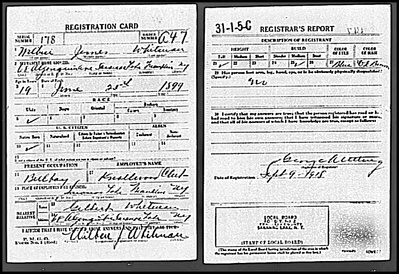 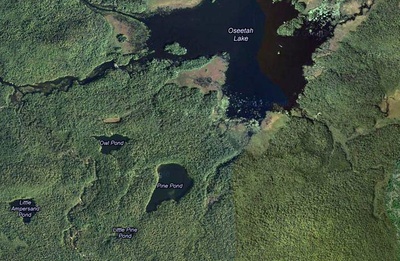 Wilbur James Whitman was a veteran World War I and World War II.  He was a partner of the Saranac Lake Hardware and later the Chief of Radiology in Champlain Valley Physicians Hospital Medical Center. His World War I draft card shows that in 1918 he was living at 68 Algonquin Avenue and was employed as a bellboy at the Knollwood Club. In 1921 he served in the New York National Guard in Company D 2nd Infantry.  The family lived at 10 Winona Avenue from at least 1930 -1942 and 103 River Street circa 1950.

Grandson Phil Terzian (born in 1952 and now living in Cupertino, California) writes: "Wilbur was my grandfather. His daughter Margaret Whitman Terzian is my mother and is still living as of 2012 in Brandon, Florida. I have a fond memory from the age of 10 when he took me in his small motorboat across Lake Flower to a location on the opposite shore from where we hiked a short distance to a cabin he owned on Owl Pond. We fished for trout. He was an avid hunter and fisherman." 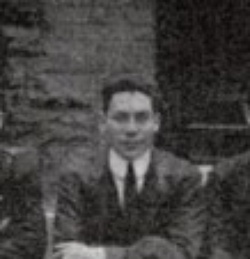 Wilbur Whitman from SLHS class of 1918

For Nancy Terzian, returning to Saranac Lake is a homecoming as both sides of her family hail from the region and she was born in Scotia, NY. Her great-grandmother, Annie Phoebe Dyer, was born in Vermontville in 1873. Anne married Gilbert Whitman, a woodsman, guide and forest ranger. Their son, Wilbur Whitman (Nancy's grandfather) grew up on Algonquin Avenue in Saranac Lake. Wilbur was a partner in the Saranac Lake Hardware Company and his daughter (Nancy's mother) was a 1942 graduate of Saranac Lake High School.

A class in apprenticeship training for plumbers, which will meet at the Saranac Lake Hardware Tuesday nights from 7 to 11 —, starting next Tuesday, Oct. 7th— with Wilbur Whitman as instructor, is announced by the Saranac Lake Rehabilitation Guild. The first class will attend a lecture and demonstration to be given by the Revere Copper and Brass Co. in Room 5 at the Town Hall at 7 a.m.

Ten Years Ago Today Wilbur Whitman, of 10 Winona Avenue, had received the rating of chief petty officer in the Navy and was waiting call to active duty.

Voters in North Elba township will use voting machines for the first time in the November elections. A relayed course in instruction is to be provided for their enlightenment on the intricacies of the machines thru arrangements by the town board.

According to Supervisor Willis Wells a representative from the factory from which the machines were purchased is expected here soon. He will instruct the custodians of the machines in their proper operation, who will in turn instruct the election inspectors. As the fourth and final step in this chain of transmitted knowledge the inspectors will undertake to instruct the mere voters. The dates for the public's participation in the plan will probably coincide with the two dates for registration in October.

Use of the machines which will go into action in November was made necessary by the state law passed in 1936 which gave the townships two years in which to purchase them and prepare for the changed system of registering the "people's choice."

The town board has appointed George Anson of Lake Placid and [“Wilbur Whitman”] of Saranac Lake as the official custodians of the machines. It will be their responsibility to see that the machines are properly sealed after election and are in good working order.

The number of election districts in North Elba has been doubled thru recent action. Instead of four there will now be eight voting places for the first time in November. Four voting booths will be established in the town hall here, one at the grange hall and one at the vacant Kennedy store on South Main street. In the Saranac Lake section of the townships machines will be stationed at the armory and at the North Elba town hall.

2012-09-25 22:11:59   Wilbur was my grandfather. His daughter Margaret Whitman Terzian is my mother and is still living (Brandon, FL) as of 2012. I have a fond memory from the age of 10 when he took me in his small motorboat across Lake Flower to a location on the opposite shore from where we hiked a short distance to a cabin he owned on Owl Pond. We fished for trout. He was an avid hunter and fisherman.

2013-01-03 14:18:54   24.97.89.170 - I am Stephanie, Phil's cousin, and the person adding all the Whitman information to this site. I would love to see the pictures and know the names of the old owners. My father took me to a camp when I was about 13. I believe it was this camp. In front was a cooks cabin where we stayed. I remember it had a deep hole in the floor for keeping our groceries cold. I also remember that when you were at the shore it looked like there was an island straight out. I have been trying to remember the location of this camp for many years. I thought it was on Owl Pond looking at the maps, and Phil's recollection solidified that thought. Do my recollections match your camp? —StephanieRybicki

2013-01-03 15:02:46   Stephanie, yes your recollections are dead on. The "little camp" as we used to call it has a hole in the floor with an 8-9' hole where we still keep our perishables when we're not there. The other camp sits on the shore of the pond and that is pretty much as it was when you were probably there. The island you refer to isn't on Owl pond, but there's a shallow sand bar and a big rock that sticks out over on the pond next to Owl, Pine Pond. I'll try and dig up the photos and figure out how to add them here. —24.97.89.170

2013-01-21 18:37:41   Mark Taylor—Thank you so much for sharing the pictures of my grandfather—That sure is what I remember as the "cooks cabin"—or "little camp"—and the island—from the photo of Owl Pond—it is the jut-out on the southern shore—as you can imagine from the camp on the north it looked like an island (my dad would not let us take the boat over there to see that it was not an island. —StephanieRybicki