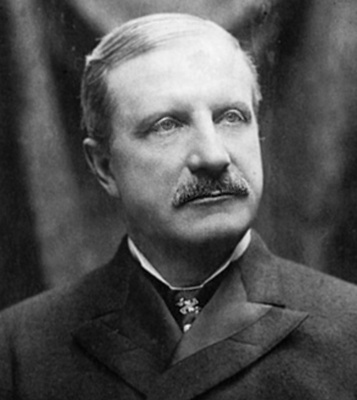 He was the son of William A. Rockefeller, Sr. and Eliza Davison Rockefeller. In 1865, he started a refinery that was absorbed by John D. Rockefeller's partnership, Rockefeller & Andrews. In 1870, that company became Standard Oil; William served as the company's New York representative until Standard Oil of New Jersey was split up by the United States Supreme Court in 1911. He also had interests in copper, railways, public utilities, and banking.

A bulletin issued by the U. S. Department of Agriculture, Division of Forestry, under date of February 3d says:

"Among the applicants for government assistance in the management of woodlands is William Rockefeller. This gentleman owns a tract of 30,000 acres at Bay Pond Franklin county, New York, on which he has built a hunting and fishing lodge. Much of the land has been logged over, but there is a large tract of virgin timber which has passed the stage of greatest production in a natural state and is lying idle. Mr. Rockefeller has asked for a working plan by which the mature timber can be turned into revenue without injury to the forest as a game preserve.

"The section of working plan of the division of forestry, which gives assistance to owners of timber lands desirous of applying conservative methods of cutting, began the new year with applications representing nearly two million acres. This innovation was introduced in October, 1808, and has been exceedingly popular, not only with farmers owning small wood lots, but with large timber proprietors. The purpose of the government in furnishing this assistance is chiefly to afford object lessons to wasteful timber owners who are now skeptical of scientific forest methods. Work has been done on several tracts in the following states. New York, Massachusetts, New Hampshire, Rhode island, Iowa, Connecticut, Delaware, Pennsylvania, Virginia, Maryland, Kentucky, West Virginia, Illinois, Missouri, New Jersey, Ohio; Indiana and Tennessee."

William Rockefeller has been giving his personal attention to the work of fighting forest fires on Saranac Lake. He owns a fine preserve in that vicinity and when apprised of danger organized a big force and went into the woods with the enthusiasm of a youth even using an axe when a man was not handy for the purpose he had in mind. He ate and slept with his men on the most democratic footing.

Mr. Redwood, who has known Mr. Rockefeller intimately for many years, stated that he was one of the most democratic men he had ever known. He said Mr. Rockefeller conversed as freely with a stableman or ditch digger as with a Wall street magnate. He said he was very modest about his fortune and that from anything Mr. Rockefeller said his friends would never have known the extent of his holdings.

Mr. Rockefeller's last visit to Bay Pond was early last month. He arrived by special car on Saturday evening June 3rd, and remained there until Wednesday, June 7th. Mr. Redwood said today that he had never seen Mr. Rockefeller looking better than on that occasion. He said, however, that the death of the aged man did not come as a complete surprise because he had been informed that Mr. Rockefeller had recently contracted pneumonia and knowing the weakened condition of his heart feared he would be unable to withstand the attack.

The Bay Pond preserve had been a great hobby of Mr. Rockefeller's. He spent about half a million dollars in the purchase of the property, in the erection of the buildings, and in the development of the preserve. His sons and daughters and their families spent considerable time in camp every summer, and usually the younger men came up for the hunting season. William G. Rockefeller, the older son, is about the same age as Mr. Redwood and they have been together every summer since they were 18 years old.