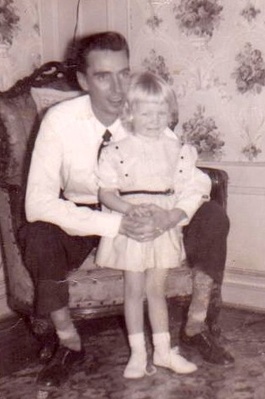 William Clements was a patient at Ray Brook about 1947, and later worked there as a waiter.

His daughter, Barbara Clements, writes: My father, William Clements, was born 9/9/1919 in Glasgow, Scotland. He came to America at the age of 1 year old. He married my mother in 1941 and in 1942 he came down with TB. At first he was in Seaview Hospital on Staten Island, NY and was transferred up to Ray Brook Sanatorium about 1947. By the time I was born in 1950 he was working as a waiter in Ray Brook. During the 1950s we lived on Franklin Avenue, then at 2 1/2 Virginia Street, then we bought the house at 29 Charles Street (which is no longer there), then when he got sick again we moved to 8 Forest Hill Avenue and then back to Brooklyn. My father passed away on Jan 22, 1962.

I went to both Broadway School and River Street schools as did my brother. I was in the Queens Court in about 1956. My best memories of growing up are from Saranac Lake.

William Clements of Nautilus Avenue, Coney Island, died yesterday morning. He lived and worked at Ray Brook for 12 years until ill health forced him to retire about a year ago. Mr. Clements is survived by his wife, Jean, and two children, Billy and Barbara.