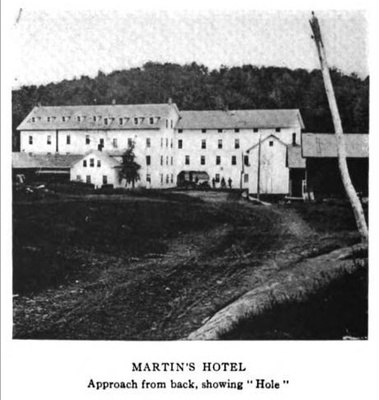 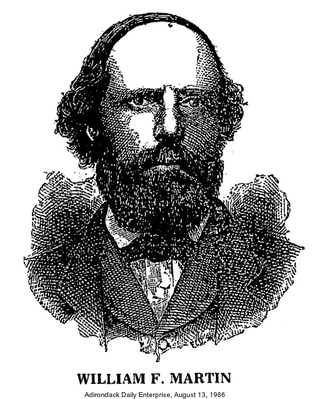 Martin was born on January 18, 1823 in Westville, New York, near Malone; he was the first child of William Martin, a former soldier in the English Army, and Molly (or Dolly) Branch. He had two brothers, Henry and Stephen, and two sisters, Clarinda and Susan. The family moved from Westville to Bangor, New York, though the sons moved to the Adirondacks; Martin first came to Saranac Lake in 1849. After their parents death, the girls joined their brothers in Saranac Lake, where Clarinda taught school for several years before marrying and returning to Bangor.

William Martin leased Pliny Miller's hotel in Saranac Lake in 1849 and 1850, and decided to build his own hotel on Lower Saranac Lake, determined to draw a wealthy clientele

William Martin was the smallest of the three boys, but still stood six feet tall. He married Laura P. Hunkins of Brushton, said to be quiet, gracious and an excellent housekeeper. They had three children, only one of whom, William A. Martin, survived to adulthood; he would gain fame as a guideboat builder. Mrs. Martin died in 1884, shortly after the death of her ten year old daughter.

In 1865, Martin married Sarah E. Lamson, of Vermontville. She, too, proved an able housekeeper and agreeable inkeeper.

The hotel became famous for the congeniality of its host, the attractiveness of its setting, and, in part, for The Hole— an opening through the hotel through which the road to the lake passed. The hotel did well for itself, especially after its virtues were broadcast by appearing in W.H.H. Murray's Adventures in the Wilderness; or, Camp-Life in the Adirondacks.

Despite the considerable success of the hotel, Martin lost it in 1881. He had a mortgage on the place held by a creditor who enjoyed the hotel, and was unconcerned about the past-due state of the payments. However, when he died suddenly, his son foreclosed on the loan immediately, selling the property to Milo B. Miller.

Martin promptly built another hotel, but it never attained the popularity of the original. Martin died in his new hotel in 1892.