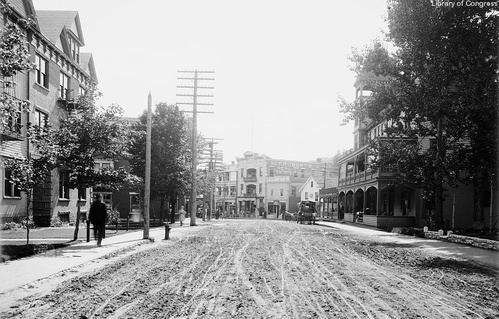 Main Street, 1906, looking south. The Roberts Block, center, has a sign painted on it's side, advertising its builders business. Photograph by William Henry Jackson Born: 1851 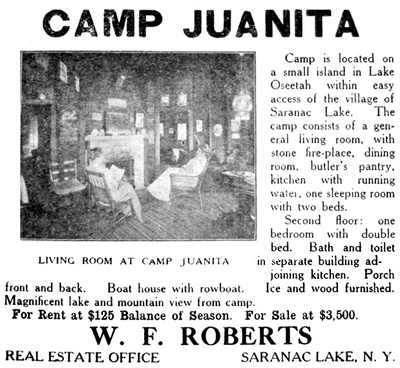 Adirondack Enterprise, October 1, 1915 William F. Roberts was a real estate dealer ("renting cottages a specialty"), an insurance agent (Equitable Life), a "notary public with seal", and an operator of an "intelligence bureau", according to signs that adorned the Roberts Block, built in 1900. He was named village police constable at the first Village Board meeting in 1892, and he was made Saranac Lake's postmaster in 1889. 1

His name also appears in the Disinfection Records of two cure cottages, 24 Front Street and 118 Main Street, though it is likely that he did not operate them himself, but rather acted as rental agent for the houses.

…It needs only a stay of a few days here to show the good management of the genial host Milo B. Miller and very engaging clerk W. F. Roberts, whose long experience, in this house, makes him master of the situation.

June 26.—Wednesday night a social was held at the residence of W. F. Roberts, for the benefit of the Presbyterian church. Proceeds $28.

Sept. 7— …New buildings are being planned for this place... W. F. Roberts is also getting ready to build a large four-story block on his lot, near Kendall's pharmacy.

Dr. and Mrs. J. H. Hallock and Mr. and Mrs. W. F. Roberts, all of Saranac Lake, were in Malone today enroute by automobile for Syracuse. They have a 36-horse power Franklin touring car.

Mr. and Mrs. W. F. Roberts, of Saranac Lake, well-known in Malone, have lately celebrated their golden wedding anniversary by a trip to their old home in Elizabethtown where they were married and spent the first years of their wedded life. They received the congratulations of many old friends there and at Saranac Lake on their return, where they were presented with a purse of $50 in gold and gifts of flowers. Mr. and Mrs. Roberts were in Malone on the Sunday preceding the anniversary. Their many acquaintances wish them many more years of happy wedded life.

William F. Roberts, 81, a resident of Saranac Lake more than 50 years, died recently at his home, 118 Main street, after an illness of nearly two years.

One of the pioneer real estate and insurance men of the Adirondacks, he was instrumental in the early development of the village of Saranac Lake, When he first went to the resort village, Milo B. Miller's store and the postoffice which was located in it, Blood's hotel and the Berkeley, were the important public buildings of the village.

Born January 30, 1850, near Elizabethtown, son of Samuel and Susan Lee Roberts, he received his early education in the schools of that vicinity. On May 12, 1874, he was united in marriage in North Hudson to Rosamond Wakefield, who died in February, 1929. The couple went to Saranac Lake, making their residence in a house which stood on the present site of the town hall.

For more than 10 years he was clerk in Miller's hotel, later serving in the same position in the Stevens House in Lake Placid. Appointed postmaster at Saranac Lake in 1890 by President Harrison, he held the office for five years. It was during this time that his attention was first drawn to the need for a real estate agency in that village.

He erected many of the present business blocks in Saranac Lake, and his name became closely associated with real estate developments thruout the Adirondacks. He retired from the real estate and insurance business in 1921, selling his interest to Herbert R. Leggett. 4

One of the charter numbers of the Saranac Lake National bank, he served as one of its directors for many years. A member of Whiteface Mountain Lodge, 789, Masons, he was chairman of the order for more than 30 years. Always taking an active part in civic and religious duties, he assisted in the building of First Presbyterian church in 1890, being one of its elders at the time of his death.

He is survived by several nieces and nephews. Services were held at 2 o'clock Friday afternoon in First Presbyterian church, with Rev. Hiram W. Lyon, pastor of the church, officiating. Burial was in Pine Ridge cemetery, Saranac Lake, where his wife also is buried, and Masonic funeral service was held at the grave by Whiteface Mountain lodge.