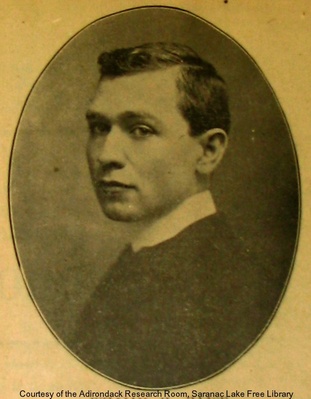 Children: Peter A. A. Haase

From the Adirondack Daily Enterprise, October 23, 1993

Many thanks to Ray Scollin Sr. for the gift of an Adirondack Enterprise (it had not at this time been a Daily) for Thursday, March 27, 1913. Full of interesting items, and some very attractive advertisements cost-wise, the paper featured a front page obituary on William H. Haase, who passed away on March 20 of that year at his Pinehurst camp on Lower Saranac Lake. After a service conducted by Rev. William B. Lusk at the camp, the remains were entrained to St. Louis accompanied by family and Dr. Charles C. Trembley.

This sad news brought to a close 10 years of beneficent service and philanthropic acts rendered by the late William H. Haase, whose death was considered to be a great loss to the Saranac Lake area. He had been active in many community affairs and after purchasing the Reynolds' property on Main Street built the handsome brick building at the current site of the Adirondack Bank, which is still known as the "Haase Block."

William Haase was born in St. Louis on Sept. 12, 1866, and upon completion of his education entered the firm founded by his father, the A.C.L. Haase Company. The business, at that time, was recognized as one of the largest and best known fish industries in the country. In 1901, at the age of 35, he married Marie Saussenthaler, a family friend of Adolphus Busch, founder of the Anheuser-Busch Company, brewer of the famous Budweiser Beer in St. Louis. Mr. Busch owned a large estate on the Rhine in Germany called the "Villa Lily" and it was here that the wedding took place. The Busch-Haase relationship over the ensuing years developed into a close and long-lasting friendship.

In 1903 Haase apparently contracted tuberculosis and came to Saranac Lake for his health. At first he stayed at the Riverside Inn and later rented the McCarthy house between Shepard Avenue and Church Street. Here, with his wife, he stayed for more than two years, during which time his condition improved to the point that, like so many others, he decided to remain in the area. In May of 1907 he purchased the Ehrich camp on Lower Saranac where Robert L. Stevenson had been a frequent guest 20 years earlier.

Upon taking possession the couple began a rebuilding project which eventually transformed the property into the beautiful buildings and lovely grounds that became "Pinehurst." As he was feeling stronger Haase began to take an active interest in local business opportunities. He purchased the Franklin Refrigerating Co. on Ampersand Avenue, which he managed for three years. He also supported many betterment programs in his adopted village and made numerous friends among local residents.

In November of 1908 a son was born to the couple at Pinehurst and it was to be their only child. Named Peter, he later became well-known in the area as an ardent sportsman sharing his hunting and fishing trips to his Canadian camp with many local friends. He also maintained a separate camp on the opposite shore of Lower Saranac Lake near the current Trudeau Institute.

In February of 1910 William Haase's health began to fail again, forcing him to abandon much of his business activity. He was an avid reader of the classics and remained cheerful in his period of sickness with never a complaint. Among his many admirers was local historian Alfred L. Donaldson, who wrote the obituary for the Enterprise.

On display in the Transportation exhibit at the Adirondack Museum in Blue Mountain Lake is a "carriole" — a very low-slung, stylish sleigh — delivered to Mr. Haase from Montreal in 1907, and donated to the museum by later owners of the Pinehurst property, Leonie and Jeanette Dieschbourg.