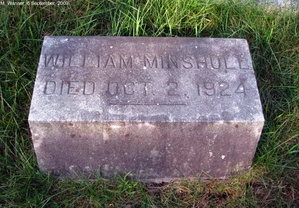 William Minshull was a banker from New York City who came to Saranac Lake for his health. In 1897 he joined with John F. Neilson and Alfred L. Donaldson, who were in similar circumstances, to form the Adirondack National Bank, the first national bank in the Adirondacks. Mr. Neilson died two years after the bank was started. Mr. Donaldson retired in 1907. Mr. Minshull, the cashier, became president in 1913. The first and only president till then had been Mr. R.H. Mclntyre, a local merchant, who also served as postmaster for two terms. Mr. Mclntyre resigned from the bank on account of failing health in 1913 and died in 1914. As a member or members, William Minshull and his wife, Ida, were named in the sale of Pontiac Club property to the Saranac Lake Boys' Club, Inc., in 1917.

Minshull was elected the first president of the Saranac Lake Chamber of Commerce in 1921.

The managers of the Ray Brook Sanitarium are insisting upon the removal of William Minshull as treasurer of the institution, although Attorney General O'Malley exonerated Mr. Minshull from blame in connection with the recent embezzlement of O.E. Droege. Mr. Minshull has not resigned and charges were filed against him for his removal. Frank Kendall, of Saranac Lake, has been chosen treasurer to succeed Mr. Minshull.