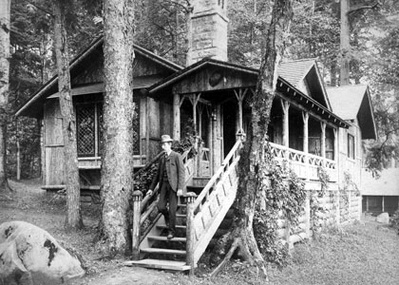 William West Durant was a designer and developer of camps in the Adirondack Great Camp style, including Camp Uncas, Camp Pine Knot and Sagamore Camp which are National Historic Landmarks. At one time he owned much of the shorelines of Upper and Lower Saranac Lakes. He was the son of Thomas C. Durant, the financier and railroad promoter who was behind the Crédit Mobilier scandal.

William West Durant was born in Brooklyn, New York, in 1850. He attended Twickenham School in England and Bonn University in Germany, and traveled extensively as a youth in Europe and Africa. At 24, his father summoned him home from Egypt to help develop the central Adirondacks for tourism.

While working to complete the eastern half of the First Transcontinental Railroad in 1869 as vice-president of the Union Pacific, Dr. Thomas C. Durant formed the Adirondack Company in 1863 from the remains of the Sackets Harbor and Saratoga Railroad Company, which owned 500,000 acres (2,000 km2) of the central Adirondacks. His goal was to cross the Adirondacks to Canada and the Saint Lawrence River. By 1871, tracks had been laid from Saratoga to North Creek, New York, at which point, financial problems caused the project to stall.

In 1876, Durant built a rustic compound on Long Point in Raquette Lake in the center of the Adirondacks to entertain potential investors in the railroad and in his land development schemes. William had first seen Raquette Lake the summer before, and spent the following winter living there in a tent. This group of simple cabins would become Camp Pine Knot, which would be hugely influential in the development of the Great Camp style. William had a hand in its development from the start, but especially after 1879, when tourism to the area exploded following the publication of WHH Murray's Adventures in the Wilderness. William opened a stagecoach line from North Creek to Raquette Lake, dammed the Marion River to allow steamboat travel from Blue Mountain Lake through to Eagle and Utowana Lakes, and built steamboats Killoquah and Toowahloondah on Raquette and Blue Mountain Lakes, respectively. He also arranged for the construction of the Church of the Good Shepherd on St. Hubert's Isle, and created a telegraph company to provide service through to Raquette Lake.

In 1884, William married Janet Lathrop Stott, 19, the only surviving daughter of the Stotts of Bluff Point and Stottville, New York, a family with which the Durants had had business and family relationships for several generations. They settled in Saratoga Springs, conveniently located between Raquette Lake and Albany where many of William's dealings took him.

Dr. Durant became ill in 1883, and died, intestate, in 1885. William took control of the family finances, although not without discord with his elder sister, Ella. William promptly set out to raise capital by selling land and timber, and sought a buyer for the Adirondack Railway, finally succeeding in 1899 with a sale to the Delaware and Hudson Canal Company. He also started work on a new camp, Camp Uncas. At about this time, William befriended industrialist Collis P. Huntington, who would prove instrumental in advancing William's fortunes. In 1895, William and his wife initiated divorce proceedings against one another. William sold Pine Knot to Huntington and J.P. Morgan bought Uncas.

William started work on a new camp complex on Shedd Lake, renamed Sagamore. It was to be the largest and most expensive of Durant's camps, centered on a three-story, 27- by 62-foot (19 m) main lodge, with a raised stone cellar adding to the height, and verandahs on three levels. No sooner was the work completed on Sagamore Camp than he was forced sell it, along with 1,526 acres (6.18 km2), to Alfred G. Vanderbilt, in 1900. As with each of William's great camps, there was little or no profit.

In 1890, William had granted his sister a monthly $200 allowance. She had doubts about whether she was receiving her fair share of their father's estate, especially when, in 1890, William bought a $200,000, 191-foot (58 m) ocean-going luxury yacht, Utowana. In 1893, Ella brought suit to attempt to force her brother to render a public accounting of the estate; William's legal stratagems would delay the trial for six years. When the case finally came to trial, it generated a substantial public interest. The court ruled against William, and he was ordered to pay Ella $753,931. William appealed, and lost again.

Ella's victory, however, proved largely pyrrhic. William had been living beyond his means for several years, and Collis Huntington had bailed him out as needed, but in 1900, Huntington died unexpectedly at Pine Knot. Between his divorce, his creditors and his sister's suit, William's financial position deteriorated rapidly, and by 1904, he declared bankruptcy.

He married a Canadian woman 23 years his junior (apparently happily) who kept a boardinghouse in New York City and dabbled in real estate. He tried a number of modest ventures, and then returned to the Adirondacks to manage a hotel on Long Lake, and then another on Lake Harris. This was followed, in 1910 by an attempt at mushroom farming in Maine that went nowhere. He worked for three years for a development on Long Island, and then worked doing title searches for Adirondack land sales.

The Adirondack railroad now runs northward from Saratoga Springs to North Creek, distant about thirty miles from Blue Mountain Lake, to which point there ia a splendid turnpike with regular lines of coaches. On this body of water Mr. DURANT, the proprietor of the road, has a large number of large row boats capable of carrying a dozen persons each. On the lakes below—Raquette and Long—he will build two steamers, which with only a short carry will furnish steam transit to the head of Raquette Falls, where a dam is to be built to set the water back so that the steamer may come almost to the head of the Falls. He will build a road around those Falls, put carriages on it, and erect an eating house at the foot of the Falls. Here he will connect with a steamer that was put on Tupper's Lake last summer to the Raquette end of the portage that has its east terminus at COREY's on the Upper Saranac. It is but two and a half miles across here, and the road is a good one. Carriages will be put on it to convey tourists across. At COREY'S, connection will be made with another steamer that plies between there and BARTLETT'S and the Prospect. At BARTLETT'S, further connection will be made with W. F. MARTIN'S steamer for the Lower Saranac, and thence by daily lines of coaches to Ausable Station and thence by rail to Plattsburgh or to Westport on Lake Champlain. Mr. MARTIN has already accomplished the greater part of the work of changing the outlet of Round Lake into its old and long-unused channel, thereby obviating the falls that now make it impossible for a steamer to ascend from the Lower Saranac, and will, if the Legislature of this winter sanction the project, complete it early next season.

This new line when fully inaugurated— as Mr. MARTIN informs us it will be in ample time for next season's advent of tourists—will make it possible for a party to leave Saratoga early in the morning and by a hard day's work make the whole distance to his place in time for supper. But it will be easily done in a day and a half, where it now requires three or four days, and will open a new line of travel which, with its health-giving air and, beautiful scenery, will make a delightful trip for parties desiring to "do" the Adirondacks. It must largely increase the number who already find these woods the best of summer resorts, and make season's begin to them exceed any of its predecessors.

And yet to every sportsman who has ever lazily floated down these waters, whipping eddying pools with alluring flies or peering from under the dazzling jack with deadly rifle, there must be sadness in the thought that his right by preemption becomes less and less with civilization's every stride, and that the delicacies of trout and venison will soon be known no more forever where once was wasteful plenty. Steam has no business here. It is the domain of the angler and the woodsman. It is the resort of Nature's lover—the home of fish and flesh and fowl that it is his pleasure to seek and capture. It is ground that the resistless push and speculation of prosaic money-seekers should spare from the introduction of their hateful improvements and leave to men who are content with the primitive comforts of the wilderness— comforts better than luxuries and more enjoyable than rapid transit and sumptuous bills of fare. Spare us our camps, our old-time pleasures and our game, and make money with your steamers, your coaches and your inns within their proper spheres, and from those who can not appreciate the enjoyment of the Adirondacks as they were and as they forever ought to be.

1. This article appeared originally on Wikipedia as William West Durant. Its edit history there reflects its authorship.