Woodruff Street runs from Broadway northeast across Church Street before crossing the Saranac River and bending north to Bloomingdale Avenue. The street is named for R. Eugene Woodruff, a Saranac Lake contractor. At one time he owned the property now occupied by the Loomis Block, the Ledger buildings, the Adirondack Hardware Company and many private residences. He opened a street through the property and in 1894 the bridge over the river was built. Woodruff supervised the construction of many local buildings including the original Harrietstown Town Hall and the Church of St. Luke, the Beloved Physician. He organized the first fire company in Saranac Lake in 1888 and served as supervisor for the Town of Harrietstown. 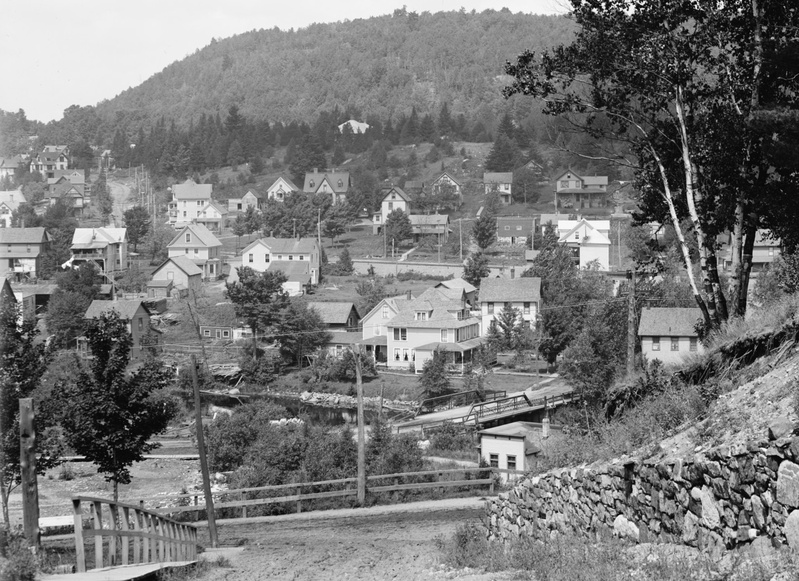 Woodruff Street bridge. The photograph is taken from Helen Hill looking down the northernmost part of Front Street (now a stairway). North Main Street is at the bottom of the photograph; above is the Woodruff street bridge over the Saranac River. Above the bridge are the tracks of the Saranac Lake and Lake Placid railway and above that, Bloomingdale Avenue. Margaret Street climbs the hill at left, and the white Morgan House is partly visible at the left edge, left of the bottom of Margaret Street. The white roof at top is the Kinney Camp. (Detroit Publishing, dated 1905-1920)