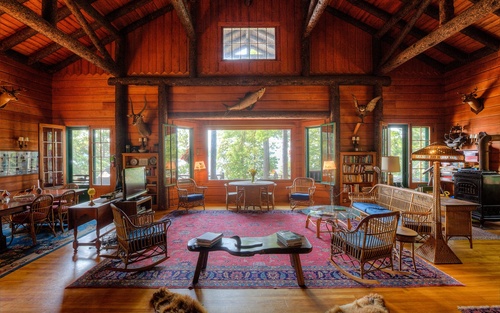 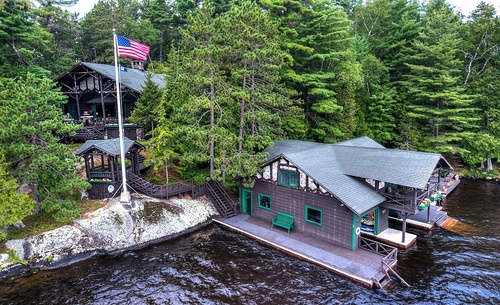 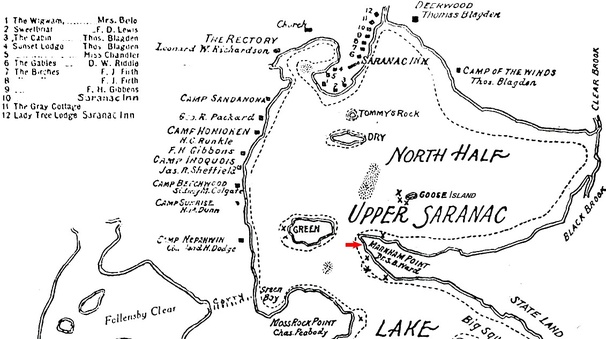 From a 1912 map of Upper Saranac LakeCamp name: "Woodwil" (named for Woodrow Wilson)

Builder or contractor: For the Markham Point road, George A. Donaldson 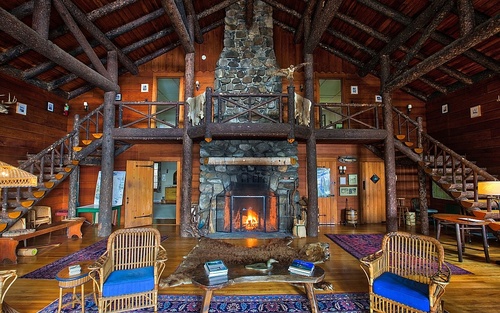 On the east shore of the lake, there was a certain degree of isolation and privacy in those days, unlike the west shore where a state road traversed the entire length of Upper Saranac. To reach the Stanley Camp it was necessary to travel along a narrow gravel road from Bartlett's Carry to the turn off into the camp driveway. Two cars could not pass in this lane and, when meeting a car from the opposite direction, one driver would have to acquiesce to the other and back up for a considerable distance in order to reach a turnout. From this road there remained another three quarters of a mile to maneuver along the camp entrance road. Beyond the Stanley turnoff the gravel road continued for another two miles to a dead end at Birch Point at the southern end of the narrows. Beyond this point, camps on the west shore had to be reached by boat with one exception. An old road existed that led in from the Forest Home Road, skirting the Black Pond Swamp to Markham Point. This is a private road today. Its entire right-of-way crosses state land, but it was built prior to the state's ownership.

…The APA has also approved a six-lot subdivision planned by John R. Dunlap on the shore of Upper Saranac Lake in the Town of Santa Clara.

The permit for the 23-acre property on Markham Point Road, located off Forest Home Road, allows the creation of one 4.4-acre lot with an existing house, four lots from 2.9 to 3.6 acres in size for single family homes, and one 5.8-acre lot to remain undeveloped but with the potential for a future two-lot subdivision.

Construction of septic systems on the site will be monitored by a state-licensed engineer, according to an APA memorandum. The permit requires future structures to be at least 75 feet from the lake's high water mark. Boat docks, but not boathouses, will be allowed at the site.