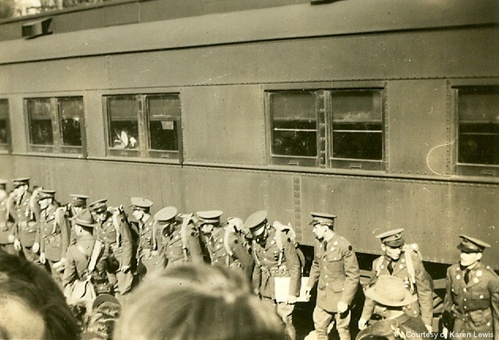 Troops at Union Station, probably c. 1940 World War II had a major impact on the Saranac Lake region, as on the nation at large. Most able-bodied men were in the service, there were blackouts and air raid drills, and food, gas and tires were rationed. Some young women who were teachers left to join the Red Cross or the women's branches of military service. News of friends and relatives killed and wounded made residents tense and somber. News reels in the movie theaters and radio broadcasts every evening kept the war ever present in people's minds. Coal and fuel-oil shortages caused some churches to close and schools shorten their school days.

Gas rationing in particular hurt a tourist industry that was still adapting to changes in American vacation habits brought about by the automobile— some big resort hotels experienced a brief resurgence as vacationers returned to longer stays.

Tupper residents will have a grim reminder that their country is at war some time in the near future when air-raid sirens sound, for Tupper Lake's first practice blackout.

The signal for the trial blackout will come, it is expected, from Postmaster Tom Ward of Saranac Lake who has charge of that phase of the county's program…

LOCAL BOARD MUST BE STRICT ON GAS RATIONING

A directive to local War Price and Rationing Boards reminding them that they should insist upon strict compliance with the gasoline rationing regulation in issuing rations was announced by Edward C. Herb, chairman of Essex county board, 15-0-6. He pointed out that the new rationing system allotments, which went into effect on Wednesday, are based upon close estimates of available gasoline.

Mr. Herb said that loose administration by local boards would result in distortion of the distribution which would, in turn, endanger the program itself and the flow of gasoline to those who are eligible.

In applications for supplemental rations, Mr. Herb directed that boards should carefully determine 1. Whether a ride-sharing arrangement had been entered into; 2 Whether it is bona fide; 3. Whether the applicant intends to continue the arrangement; 4. If no ride-sharing arrangement has been entered into, then (a) Whether as many passengers as possible are being carried by the applicant, and (b) That no alternative; means of transportation are available. Particularly in urban areas, the possibility of applicants using trolley cars or buses must be carefully investigated and the application must be denied if such transportation is adequate.

TURN DOWN PLEA FOR GAS FOR TOURISTS

Keeseville Chamber of Commerce Has Reply From Rationing Chief

The Keeseville Chamber of Commerce has received the following communication from Joel Dean, chief of fuel rationing, office of price administration, in answer to resolutions and petition relative to the gasoline rationing as it effects resort areas:

The Office of Price Administration and its gasoline rationing program is interested in two objectives: first the most equitable and efficient distribution of the limited supply of gasoline in the East in order to keep necessary cars in that area going; secondly, the preservation of such necessary transportation by private automobiles In order to keep important transportation by busses, trains and street cars functioning normally for the war program. It is imperative that we cooperate with the war effort by scaling down the mileage of our automobiles to the absolute minimum required for occupational needs.

Therefore, the gasoline rationing regulations, effective July 22, make no provision for special rations for vacation travel, except as it can be accomplished on the basic allotment of the "A" book. The gasoline shortage in the East resulting from the lack of facilities to distribute petroleum products, requires such a rationing in that area. Under it, this summer certain vacation areas all over the East Coast may suffer more than others. That is an unfortunate situation which modern total war brings about and which we may be forced to meet with modifications of our businesses or even with sacrifices until more gasoline can be supplied.

We appreciate your comments and suggestions. We earnestly hope however that by reduction of unnecessary driving and by careful use of the "A" book in addition to the facilities offered by means of public transportation, people may still be able to take their needed vacations and that your business may not suffer unduly. We are sure that when the situation is understood, inconveniences and hardships caused by rationing restrictions will be looked upon by all of us as additional contributions to the war effort, and will seem insignificant when compared with sacrifices being made by our solders on the battlefronts of the world.

TUPPER LAKE — Noah John Rondeau, famed hermit of the Cold River country, crossed his fingers and headed for the Tupper Lake rationing board last week to find out how he could remain a hermit and still comply with the point rationing system.

Rationing had nothing to do with a hermit's life until last fall, when Rondeau discovered that the usual supply of sugar which his hunting friends brought in to him by arrangement each fall could not be obtained without Ration Book No. 1, which he didn't have. His friends and fellow members of the Adirondack Mountain Club and the "Forty Sixers" Club sent him enough from their own supplies to last until Christmas.

It has been the hermit's custom to come out of the woods over 18 miles of wilderness on snowshoes, just once a year, at Christmas time. He visited friends this year at Elizabethtown, Ausable Forks and Upper Saranac Lake, and answered the 80 to 100 letters which come into Corey's post office and accumulate for him each year.

How to get Ration Books No. 1 and 2, and how to get around the time element of the coupon system so that he can hit the trail for his Cold River home with sufficient supplies to keep him there until next Christmas, is Rondeau's problem.

With a vegetable garden, gun and fishing tackle, the hermit manages to be almost self-sufficient, but sugar, coffee and other essentials that he can't grow, shoot or catch can't be obtained at Cold River.

Gold stars in honor of the men of Saranac Lake who have given their lives for their country during World War II have been placed on the Village's honor roll in Riverside park.

The stars have been placed before the name of each man who has made the supreme sacrifice in action or while serving his country. There are 18 gold stars at present on the honor roll.

The honor roll which was dedicated to the service men and women of Saranac Lake on May 30, 1943 now contains approximately 1,000 names.

A stirring tribute to the heroes of the past and present wars was paid yesterday morning by marchers in the Memorial Day parade and by the public at services in Pine Ridge cemetery and Riverside park.

The parade, although smaller than former years, showed the patriotism and enthusiasm of local people as they marched through the streets amid the applause and cheering of spectators who lined the sidewalks along the main street.

Starting promptly at 10 o'clock on St. Regis corner, the parade, led by Walter Weir, marshal, the majorettes and the Saranac Lake High school band, proceeded down Broadway to Main street, down Main to River street and from River to Pine Ridge cemetery.

At the cemetery, the Rev. Joseph M. Blais, chaplain of the local post, American Legion, conducted brief services at the graves of a veteran of the Civil War, Spanish-American War and World War I veteran. As marchers and spectators stood in bowed silence a three-gun salvo was given by members of the guard and Taps were sounded across the hills. Legion members placed floral pieces on the graves.

Leaving Pine Ridge the parade continued to Riverside Park where tribute was paid to those soldiers and marines whose lives were lost at sea. As flowers placed on the waters of Lake Flower another three-gun salute was given and Taps sounded.

A special dedication ceremony and the unveiling of the new honor roll which has been erected in Riverside Park to honor those men and women who are now in the service of their country from this village was also held. Dr. Henry Leetch, village trustee, gave the dedication address as the board which contains the names of 600 local people was unveiled, The ceremony closed with the playing of the National Anthem.

Included in the line of march were members of the American Legion, Spanish-American War veterans, the New York State Guard, the Boy and Girl Scouts, the Red Cross Nurses' Aide corps, the Women's Motor corps, the Patriots Club of America, service men of the present war, the Boys' and Girls' Hi-Y clubs, Veterans of Foreign Wars. Riding in the parade were three Gold Star mothers, one of World War I and two of this war. They were Mrs. George Lyeth of Lake Clear, whose son gave his life in the last war, and Mrs. E. J. Booth of Saranac Lake and Mrs. Clayton Muller of Paul Smiths whose sons have died in the present war.

Because of the gas and tire rationing, local residents who base been forced to abandon their usual weekend travels, made good use of their time by starting their Victory gardens or just enjoying too days of rest. Many found entertainment in the… [incomplete]