This exhibit was presented by Historic Saranac Lake in the John Black Room of the Saranac Lab, 89 Church Street, which is open to the public through the fall and winter by appointment. The World War I exhibit was replaced in the summer of 2012.

Almost three hundred residents of the Saranac Lake area served in some capacity in World War I, then known as the Great War.

Saranac Lake gave its returned soldiers, sailors and war workers an official welcome last week at the Boys' Club, with special exercises in appreciation of their patriotic work. Appropriately inscribed bronze medals were presented to all the returned soldiers and war workers present by Mrs. Whitelaw Reid, of New York, who was prominently identified with relief work during the conflict. The village president presided and Richard Lloyd Jones, of Madison, Wis., a guest of C. M. Palmer, made the speech, in which he showed that the Stars and Stripes had always gone into battle, not for selfish purposes, but for freedom and liberty. He said that our boys had just given the country a new legacy by their valor in battle and predicted that no imperial power would ever again threaten the flag of America, which is a country worth living and dying for. Livingston Chapman sang the Star Spangled Banner and "My Country, 'Tis of Thee." Each bronze medal bears the name of the recipient, the words, "For Service for Democracy Liberty and Justice" and "Presented by the People of Saranac Lake, N. Y., to Their Loyal Defenders." 1 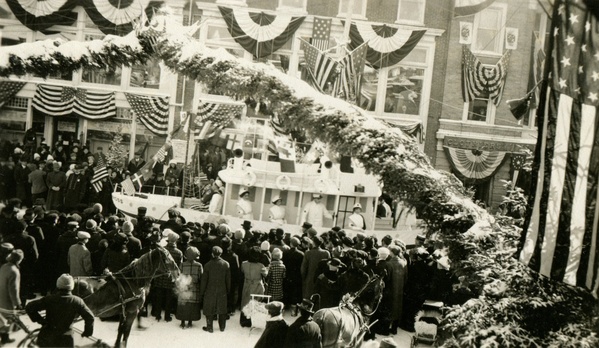 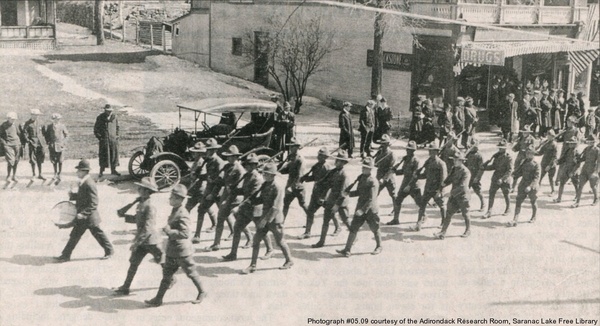 World War One Parade, 1918, Main Street. Part of the Linwood Cottage shows at left, rear; the Drugs sign is at the site of the later Charlie Green's Market, presently the home of the Adirondack Artists Guild. Adirondack Daily Enterprise, May 28, 2005. 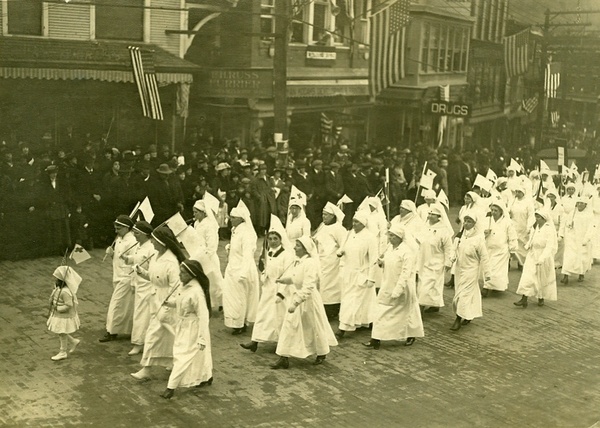 The back of this photograph reads: "World War I, Little girl, Ida Weiner." Courtesy of Mary Hotaling.

1. One of these medals is on display as part of the World War I exhibit in the John Black Room of the Saranac Laboratory. Posted July 12, 2010.