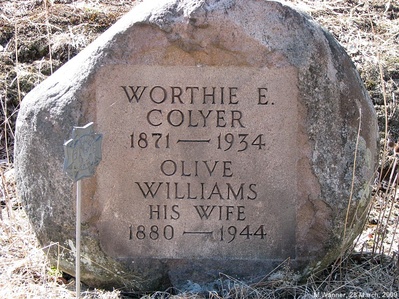 In 1953, H. Ray Williams suggested naming a short street after Colyer, saying that it should be named "'in memory of Worthie E. Colyer who passed away in Saranac Lake in 1934. For many years he owned 74 and 76 Park ave., and two lots in the rear of each facing Baker street. He was boosting for Park avenue when most of us thought of that section as a farm. He also was a Village Trustee for one term about 1928 or 1930." [It was 1924 and 1925.] He is buried in Pine Ridge Cemetery.

The Colyer daughters became avid hikers and members of the Adirondack Mountain Club, attending their annual meetings in Lake Placid on Memorial Day weekend. Responding to the comment in Cure Cottages of Saranac Lake that "little is known of Worthie Colyer," they stopped by the house at 76 Park Avenue one year to enlighten the Hotalings, who lived there at the time, about their family connection. While on her hiking honeymoon, one of the daughters met Noah John Rondeau, the well-known hermit. A photograph of both of them taken at that time appeared in a book about him. On a visit in May 1991 Mary Dittmar and Helen Menz recorded a rather garbelled tape with Mary Hotaling, talking about their father and their life in the houses at 74 and 76 Park Avenue, but it could not be called an interview.