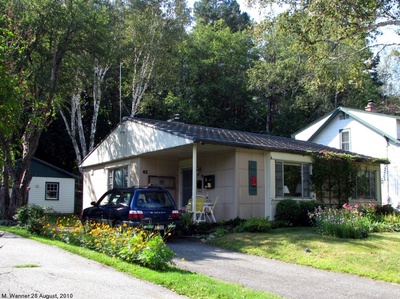 This Lustron House was built as a spec house by Rene Gendron of Gendron Lumber Company in 1949. As an engineering student at Lehigh University, Ed Worthington had worked at Bethlehem Steel Company. He knew the idea was good and the panels would hold up with Coraseal between the enamel coated steel panels, so he bought the house.

Source: Recollections of Janet Worthington Dudones, who grew up in the house.

SARANAC LAKE. — Purchase of the newly completed prefabricated all-steel house in Petrova ave., near the high school by Mr. and Mrs. Edward H. Worthington Jr., has been announced by Donat Gendron & Son. Mr. Worthington is head of the technological department of the Study and Craft guild and is prominent in sportsmen's and civic affairs.

Gendron & Son are dealers in Franklin, Essex and Clinton counties for the new type homes which can be erected in a short time. The one purchased by Mr. and Mrs. Worthington was set up as a model by the firm and attracted about 5,000 visitors from thruout the North Country while open for inspection for 10 days recently.