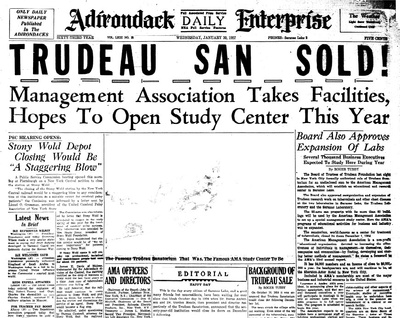 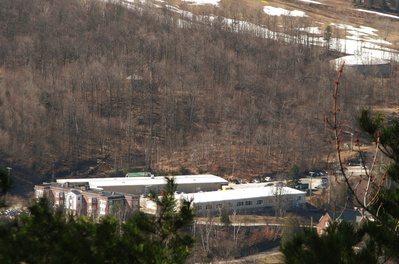 Although the AMA originally used many of the buildings of the Sanatorium, they have since moved most operations into the two new buildings shown here in a view from Mount Baker. At left is Ludington Infirmary, at upper right, the new (2011) village water storage tank, above that, the ski slope of Mount Pisgah. An older water tank can be seen near the center of the photograph. The American Management Association (AMA) is an international corporate training and consulting group based in New York City that provides a variety of educational and management development services to businesses, government agencies and individuals. The non-profit membership organization offers business courses in communication, leadership, marketing, sales, human resources, finance and accounting. It operates training centers in the US, Canada, Mexico, Europe, and Japan.

Founded in 1913 as the National Association of Corporation Schools, the AMA became the American Management Association in 1923. In 1957, the AMA purchased the campus of the Trudeau Sanatorium for use as a training facility. However, after railroad passenger service to Saranac Lake was discontinued by the New York Central in 1965, use as a training center became more difficult. Presently, it is used primarily as logistical support center for the organization.

An ad in the Adirondack Daily Enterprise Weekender, February 5, 2016

We are a global, not-for-profit, membership-based association that provides a broad range of management development and educational services to individuals and organizations.