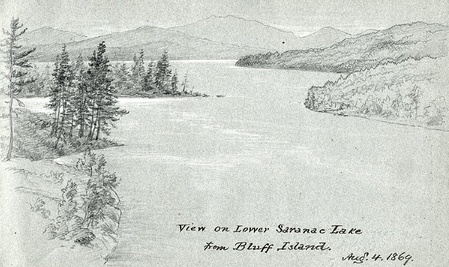 A page from Rev. Fred B. Allen Sketchbook #2, August 4, 1869
Courtesy of the Adirondack Experience 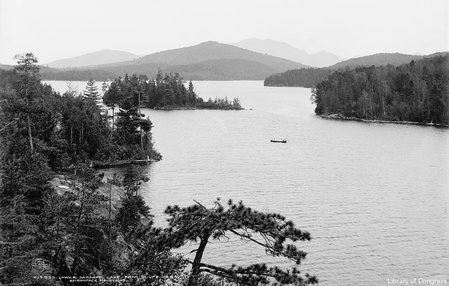 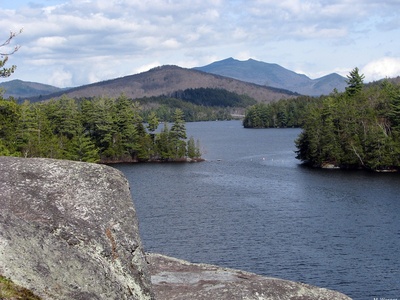 The view from Bluff Island, 2012. The top of the cliffs are at lower left. In the background from left, Mount Baker, Dewey Mountain, McKenzie Mountain, Haystack Mountain. A small section of New York Route 3 can be seen above the water's edge, directly beneath McKenzie. 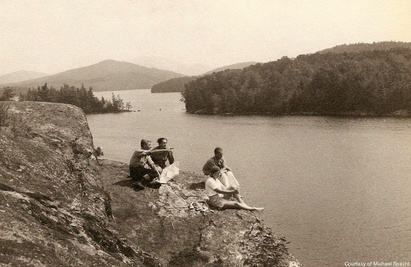 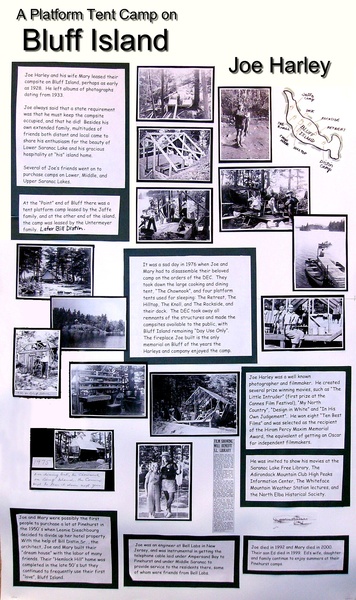 Bluff Island Display by Bobbie Leamer, History Day 2008. Click on the image to enlarge the display Bluff Island is a nine-acre island in the south end of Lower Saranac Lake, near the point where the Saranac River exits the lake. During Saranac Lake's days as silent film shooting location, local policeman Walt Weir executed a spectacular dive from the cliffs of Bluff Island mounted on a horse and wearing a dress, doubling for Pearl White in an episode of the 1914 "Perils of Pauline" serial. 1

From a display by Bobbie Leamer, part of History Day 2008

Joe Harley and his wife, Mary, leased their campsite on Bluff Island, perhaps as early as 1928. He left albums of photographs dating from 1933.

Joe always said that a state requirement was that he must keep the campsite occupied, and that he did! Besides his own extended family, multitudes of friends, both distant and local, came to share his enthusiasm for the beauty of Lower Saranac Lake and his gracious hospitality at "his" island home.

Several of Joe's friends went on to purchase camps on Lower, Middle and Upper Saranac Lakes. [See Malcolm A. Specht]

It was a sad day in 1976 when Joe and Mary had to disassemble their beloved camp on the orders of the DEC. They took down the large cooking and dining tent, the "Chownook", and four platform tents used for sleeping: the Retreat, the Hilltop, the Knoll, and the Rockside, and their dock. The DEC took away all remnants of the structures and made the campsites available to the public, with Bluff Island remaining day use only. The fireplace Joe built is the only memorial on Bluff of the years the Harleys and company enjoyed the camp.

Joe Harley was a well-known photographer and filmmaker. He created several prize winning movies, such as The Little Intruder (first prize at the Cannes Film Festival); My North Country, Design in White and In His Own Judgement. He won eight "ten Best Films" and was selected as the recipient of the Hiram Percy Maxim Memorial Award, the equivalent of an Oscar for independent filmmakers.

He was invited to show his films at the Saranac Lake Free Library, the Adirondack Mountain Club High Peaks Information Center, the Whiteface Mountain Weather Station lectures, and the North Elba Historical Society.

Joe was an engineer at Bell Labs in New Jersey, and was instrumental in getting the telephone cable laid under Ampersand Bay to Pinehurst and under Middle Saranac to provide service to the residents there, some of whom were friends from Bell Labs.

Joe and Mary were possibly the first people to purchase a lot at Pinehurst in the 1950s when Leonie Dieschbourg decided to divide up her hotel property. With the help of Bill Distin, Sr., the architect, Joe and Mary built their dream house with the labor of many friends. Their Hemlock Hill home was completed in the late fifties, but they continued to frequently use their first love, Bluff Island. 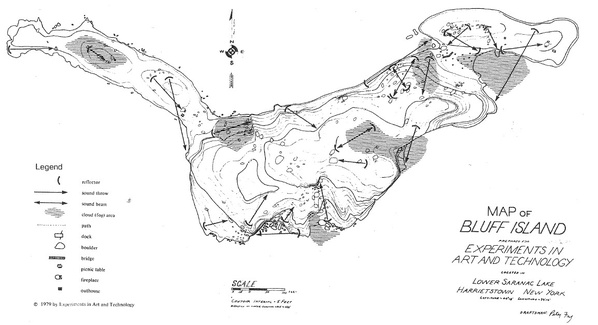 1. This dive is widely credited to a Harry Duso, but his son, Don has said that, while his father did jump from Bluff Island as a stunt person, he did not do so on horseback.