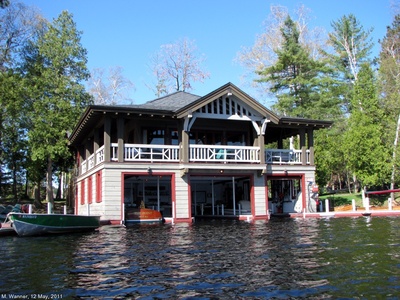 The boathouse at the Point 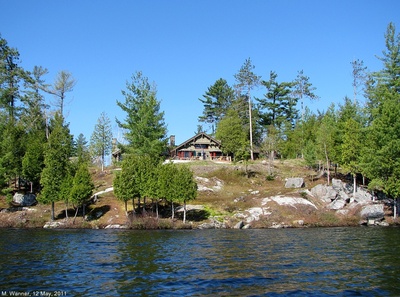 Other names: Camp Cork; The Point 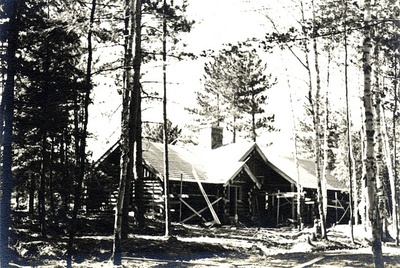 Under Construction.   Photograph added by a reader 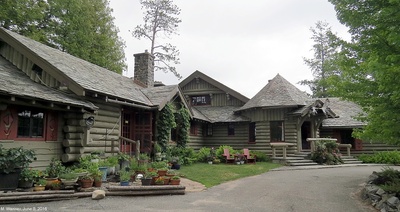 The Main LodgeCamp Wonundra was built by William A. Rockefeller II between 1930 and 1933 on Whitney Point, above Fish Creek Bay, in Upper Saranac Lake, on land he bought from Henry Blagden. The camp was designed by William Distin.

The main lodge is a large one-story building with three wings and an octagonal vestibule. The structure contains eight large stone fireplaces. Other buildings include a guest house, boathouse, log lean-to, pump house, two-story garage with gardeners' quarters, a woodshed and a sugar house.

Rockefeller sold the camp in 1969 to Briggs, McCoy, and Gillespie, who called it Camp Cork. They sold the camp to Edward Carter of Onchiota. 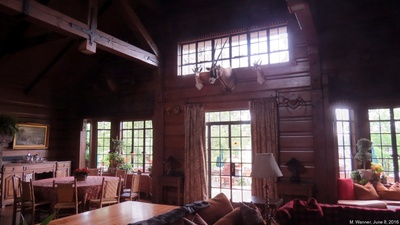 Dining Room in the Main LodgeSince 1980, it has been operated by David and Christie Garrett as The Point, an upscale resort; 2011 rates, including tax and gratuity, range from about $1700 to $3400 per night. 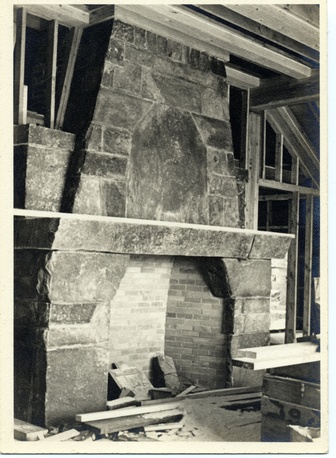 … On the Upper Saranac Lake a short motor trip-from Lake Placid, finishing touches are being applied to the magnificent new camp of William A. Rockefeller of New York, son of the late William G. Rockefeller, whose famous Bay Pond estate near Paul Smith's was for many years nationally .and even internationally known alike because of its size and appointments and because of stormy developments as the late Mr. Rockefeller sought to expand his Adirondack domain and small owners whose lands were affected fought with all means in their power to protect their rights.

Mr. William A. Rockefeller, who is a grand-nephew of Mr. John D. Rockefeller Sr., and his wife, who before their marriage in Detroit June 16, 1931, was Mrs. Mary Ball Boyer, daughter of Mr. William A. Ball of Buffalo, have arrived at Saranac Inn, where they have each summer since their marriage occupied The Cabin, leased annually by his mother, Mrs. William G. Rockefeller. They will shortly occupy their new camp which is located on Whitney Point on the shore of the Upper Saranac.

Erected at a coat of over $100,000 by the Blagden Construction Co. of New York city after plans, also prepared by Mr. William G. Distin of Saranac Lake, the-new Rockefeller camp is a notable addition to the imposing summer homes for which the Adirondack region is famous.

.The camp is a log construction with rough stone foundations and comprises four units, the main building being devoted to a large living room with big stone fireplaces at either end. Among its conveniences are steam heat, running water, hardwood floors throughout and an inter~communicating telephone service…

The Point is sold

SARANAC LAKE — A Vermont investor has paid more than $1 million for The Point, an exclusive private inn and resort on Upper Saranac Lake.

Papers closing the deal were signed this month, ending more than a year of negotiations for the 10-acre complex that once belonged to William Rockefeller.

"We like Ted's philosophy," Garrett said. He explained the resort will "be run in the same manner ... still like a private home — very exclusive and elegant."

Records on file in the Franklin County Clerk's office show Garrett paying $1,050,000 for the property itself, which includes some 3,000 feet of shorefront. Add the cost of the established resort business, and Garrett says the final purchase price was "quite a bit more than that," although he is reluctant to reveal exactly how much.

Carter transformed the former Rockefeller estate into an exclusive and pricey resort in just a few years. He took in his first paying guests during the 1980 Olympics, and by last year The Point was listed among only six American members of the Relais et Chateau, an elite group of about 300 international hostelries.

The new owners were frequent visitors in recent years, and ran it on a management contract with Carter this summer while moving ahead with the purchase talks. It was the Garretts who provided the pontoon boat to carry church-goers to Upper Saranac's Island Chapel when the regular chapel ferry had to be docked.

While planning to build on The Point's already established reputation, Garrett, who describes himself as being in the investment business, will soon shut down for a month to renovate some of the rooms. The plan is to add more fireplaces and the like to expand on the resort's rustic character.

The Garretts spend a great deal of time at The Point, but the host and hostess are Mr. and Mrs. Robert Carter (no relation to the former owner), a pair of New Zealanders who used to work at Camp Topridge.

The Point is not open to the general public like a regular restaurant or hotel. Small numbers of guests reserve spots well ahead of time to stay for periods of 2-3 days and longer.