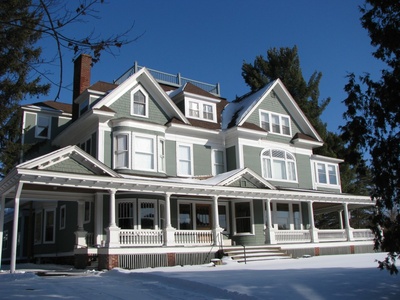 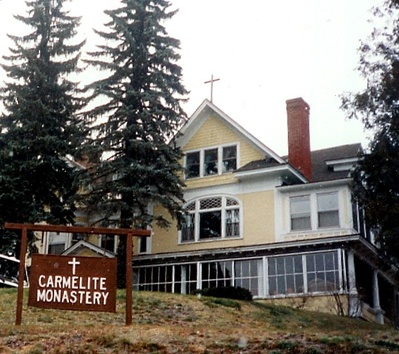 Margery Hull in the 1926 Canaras 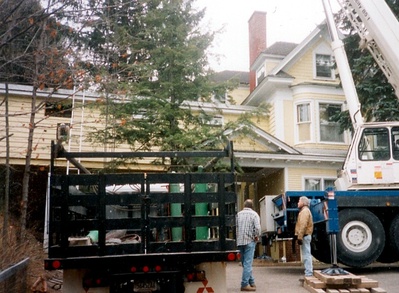 Carmelite Monastery, 1999, showing the bridge connecting the building to 66 Franklin Avenue, as it is being removed. Courtesy of Mary Hotaling Address: 8 Franklin Avenue

Cure evidence: According to the 1916 TB Directory, the Riddle Cottage, run by Mrs. W.D. Riddle, had room for 18 patients, had four cure porches and charged $23-75 per week.

Elise Chapin was a patient in this cottage in 1935.

Daniel Wiltshire Riddle, age 46, came to Saranac Lake in February, 1879, as a patient of Dr. E. L. Trudeau. He remained 34 years. His obituary in the Adirondack Daily Enterprise stated, “He continued to make Saranac Lake his winter home, slept under canvas during the summer, as a part of the cure, and was carried from camp to Saranac Lake, or visa versa, on a bed." When Dr. Trudeau founded his Sanitarium in 1884, Riddle came to his aid in finances, building and administration. In 1886 he became manager at the new Saranac Inn.

In 1916, Mrs. W. D. Riddle [the transposition may be a typographical error] operated the Riddle Cottage, which had room for 18 patients, four cure porches and charged $23-75 per week.

Harry and Florence Hull owned and operated the house as a boarding cottage in the early twenties. Mr. Hull was the Village Engineer, and it was under his guidance that Saranac Lake's major streets were paved with the yellow brick that still shows in places where the blacktop wears through. He also was chief engineer on the Whiteface Mountain Memorial Highway project and did a great deal of surveying in the area.

Perhaps as early as 1923, Camilla Hayes, a nurse and sister of Dr. John N. Hayes, ran the house as a nursing cottage. After she married Henry J. Hudson in 1933, the cottage name was changed to the Hudson Cottage, which operated until at least 1948. When Mrs. Hudson retired in October, 1952, the Hudsons gave the house to the Carmel Sisters.

The Carmelites had been a cloistered order — in fact, that had always been the thing best known about them. I recalled the fence that'd surrounded the convent, helping cut them off from the outside world. And though I can't recall the exact date, I can remember when the fence got taken down, when they were no longer cloistered.

In junior high I had a friend who was a paperboy, and from time to time I'd go on his route with him. One of his deliveries was the Carmelites, and inevitably that was the high point of the day.

It was all very other-worldly. We'd walk in the lobby and go to a wooden barrel of sorts that would set into the wall. Next to it was a push button. My friend would push the button, which rang a bell somewhere in the confines of the house. A moment later a voice from the other side of the wall would ask who it was. My friend would identify himself, the barrel would rotate till its inside was revealed.

Then he'd put the paper in the opening; the barrel would rotate again, taking the paper with it.

The Most Rev. Bryan J. McEntegart, Bishop of the Diocese of Ogdensburg, today celebrated the first Mass to be celebrated in Saranac Lake's new convent at 68 Franklin ave.

He was assisted by Rev. John M. Waterhouse and two altar boys, the latter relatives of sisters in the convent here. The 8 o'clock Mass was attended by approximately 50 friends and relatives of the Carmelite Sisters.

Bishop McEntegart, speaking to the congregation, stressed the historic value of this day, the Feast of the Presentation, the 203rd anniversary of the arrival of Father Picquet at the present site of Ogdensburg where, a year later, Father Picquet founded Fort de la Presentation, which was the beginning of the city of Ogdensburg. Therefore, the Bishop said, this would be a fitting day for the establishment of the first Carmelite Convent in this Diocese, since the presence of the Carmelites has always been considered important. "The Catholic heart reveres those in the contemplative life," the Bishop said, "for Catholics know that the service of God Himself is most important, because this is truly the service of all mankind." Bishop McEntegart expressed his gratitude to Mr. and Mrs. Henry Hudson for presenting their Franklin ave. home to the Carmelites.

The Carmelite monastery is the first in Northern New York and the 47th in the United States.

The Bishop expressed his initial concern over the welfare of the Carmelite sisters after they arrived in their new home, but was quickly reassured by Mother Superior that their needs were too simple to consider. For beds they only needed boards covered with straw; for food they would depend on what people would bring them. Their diet excludes the eating of meat completely. And most of them live to advanced ages.

A Carmelite custom allows them to ring a bell outside the convent if they are starving, but so far, said the Mother Superior, no convent in the United States has ever had to ring the hunger bell.

Bishop McEntegart concluded his remarks with a direct address to the Carmelite Sisters present:

"May this step be an advancement of your spiritual life, and an example to the people and priests of this diocese."

At the present time there are seven sisters in the Saranac Lake Convent. Until such time as the Bishop comes to establish the canonical Enclosure, after the fence and grilles are constructed, no new sisters will be received. After that time, Postulants will be received, after being chosen from the list of applications and being interviewed. Certain canonical requirements must be met before they enter the difficult life of a Carmelite.

For the next few weeks, the Sisters may occasionally be seen by visitors, but after the establishment of the Enclosure, only the immediate families may visit them at intervals.

SARANAC LAKE - In late 1952, a small group of women moved into a former cure cottage on Franklin Avenue in Saranac Lake. Their communal lifestyle and mission were shrouded in mystery. The inner recesses of the great house in which they lived were forbidden to outsiders. In fact, until a papal declaration in the late 1960s, these women were forbidden to leave that house. Who were these people? Criminals under house arrest? Patients under the strictest care? None of the above.

They were nuns. And they were praying. Because that is what they do. And now, almost five decades later, they are leaving - almost as quietly as they came.

The Carmelite Monastery at 68 Franklin Ave. was born when Bishop McEntegart of Ogdensburg, a Catholic diocese which encompasses the North Country, vowed to bring a contemplative order to the diocese if the Cathedral of Ogdensburg, which had burned down, could be rebuilt debt-free. The Cathedral was built, debt-free, and the bishop made good on his promise.

The nuns who inhabit the monastery have taken vows of poverty, chastity, and obedience. Their ministry is one of prayer — prayer for the diocese's bishop, priests, religious and lay people. Until the Second Vatican Council (Vatican II) in the mid-1960s, which did much to contemporize the Catholic Church worldwide, the nuns were cloistered — meaning absolutely no outside contact. Among the changes brought about by Vatican II was a change in the way the nuns at the monastery lived. No longer were they forbidden to meet face to face with those outside the monastery, although their role in the community remained the same — to pray.

The order has always depended in large part on the goodness of community members; stories abound regarding the food and supplies given to the order by members of the surrounding community.

"We love the people here," said Sister Marie Gertrude, who has been with the order here since its beginning in 1952. "There's a beautiful spirit of people helping each other, and we've been the recipients of that."

The order flourished and grew through the years, and to make more room, the house next door to the original building was purchased in 1967.

So why are the sisters leaving? To bring Carmel into the future, explained Sister Marie.

The nuns here will be merging with a monastery from Barre, Vt. in Beacon, N.Y. The merger has been in process for more than five years.

"We are trying to respond creatively and courageously to the signs of the times emerging in today's world," Sister Marie said in a Nov. 29 Mass at St. Bernard's Church in Saranac Lake, "and, as an enhanced community, to bring the Carmelite way of life into the future, sharing the riches, depths, and profound joy of our Teresian spirituality."

One of the more difficult tasks for the order was to disinter and move the remains of the six members who have died here and were buried in a small cemetery on the property.

"That was hard to do," said Sister Marie. Despite their devotion to a higher calling, the nuns have established strong bonds throughout the community and their departure will not be easy for them.

"It will be hard to leave," Sister Marie said, "but the reason makes the pain worthwhile."

The modern order of the Carmelites was founded, for all intents and purposes, by St. Theresa of Avila, a fifteenth-century Spanish mystic reformer. St. Theresa set rules for the order, bringing a focus which has continued through the centuries. The nuns who for 46 years have called Saranac Lake home are continuing this calling, striving to keep themselves viable in the contemporary world. By combining their forces at the monastery in Beacon, they hope to do just that.

"The merger should make us strong and vital," explained Sister Marie, "and we hope to make the monastery (in Beacon) available for people to come apart and pray with us. This place (on Franklin Avenue) didn't lend itself well to that."

Rest assured, though, these nuns will be gone but not forgotten by the community in which they lived and interacted for these many years. Nor will they forget Saranac Lake or the North Country.

"The people here will be with us in our hearts," assured Sister Marie, adding, "prayer isn't contained to a place. Our commitment is going to continue."

The house at 68 Franklin Ave. has been purchased by a family from New York City, said Sister Marie.

Anyone wishing to do so may keep in contact with the nuns of the Carmelite Monastery by writing to their new address: 139 DePuyster Ave. Beacon, NY 12508.

Howard Riley wrote, I do know [Bill McLaughlin] loved the Carmelite Sisters and often visited their monastery on Franklin [Avenue].We used to bring food to the turnstile on many Saturdays; The Carmelites were cloistered so one never saw the Sisters, but it was interesting to visit once-in-a-while if there was someone there when we left the packages. During Mass they were seated behind a veiled area. Bill was one of their contacts to the outside world so occasionally Sister Theresa would call him. They had a phone to call out if they were in need but no one had the telephone [number] to call them. Now this . . .

"Extremely interesting work at the Carmelite open house over the weekend drew rave notices from visiting townspeople and area visitors. The story I'd like to get will never be told. How these nuns have reached their happiest hour when they die.

"Left out of the enjoyment of visitors' day is the Carmelites boxer dog who patrols the grounds with the dignity of a cleric. This dog probably has more love and affection heaped upon him than any other canine in the world. But he knows where it should come from . . . the inside!"