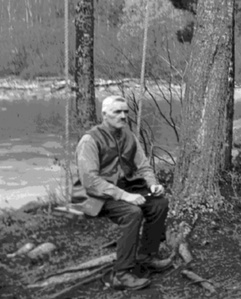 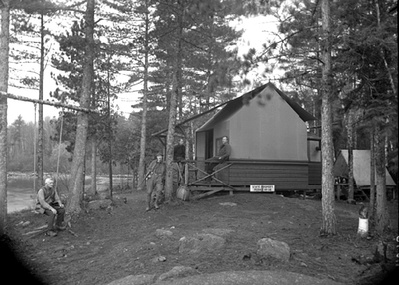 Gilbert Whitman, left, at Tent Platform 146 in Lower Saranac Lake. Courtesy of the New York State Archives. Information supplied with the photograph reads: "Campsite consisting of tent and platform with sign "State Property Permit No. 146," on Lower Saranac Lake in the Adirondack Mountains. Two men pose for the photograph; one stands holding a rifle beside an Adirondack pack basket, while the other sits on a swing. Forest Ranger Gilbert George Whitman is the man on the swing."

Gilbert George Whitman was an Adirondack guide according to the 1910 Census. In 1920 he was a house carpenter, and in 1930 a forest ranger.

He served as treasurer of the Adirondack Guides' Association.

Crowds still continue to pour into Madison Square Garden because the Sportsmen's Show is there......

The "moose call" is heard all over the show at frequent intervals. The "moose caller" is Gilbert Whitman, one of the Adirondack guides, who learned the art of moose calling up in Canada, where the moose abound......

—Gilbert Whitman, who was appointed forest ranger to fill the vacancy caused by the sudden death of James Ahern of Saranac Lake, was a recent caller in town on state business.

Lightning that struck a tall pine in one of last week's electrical storms over the St. Regis lake section, started a forest fire on state land, and a blaze was well started on a path of destruction when forest ranger Harry Torrance of Keene Valley who had been notified, accompanied by ranger Gilbert G. Whitman of Saranac Lake, arrived on the scene with apparatus to do battle with the spreading blaze.

Their warfare lasted all night, but hundreds of acres of timber were saved and the only evidence left, of what might have been, is the charred trees and blackened surface of the area over which the fire had run before the state's guardians of the woodlands could get into action.

The remains were brought to Saranac Lake by his wife and son, Wilbur Whitman, pending arrangements for the funeral.

Mr. Whitman was born 68 years ago in Harrietstown, the son of George and Zoe Whitman. His early life was spent on his parents' farm. Later he became a skillful guide and woodsman.